GENEVA, May 12 2010 (IPS) - The Washington Consensus is dead and the state must play a new role in development. The triple crises – economy, food and climate – show the need for a new developmental model as export-led growth and financial speculation in agricultural markets have proven to be disastrous. 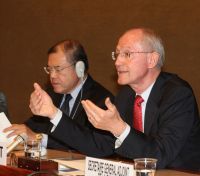 This was the message at a two-day public symposium hosted by the United Nations Conference on Trade and Development (UNCTAD) that ended May 11. The Washington Consensus refers to the economic model of liberalisation and deregulation.

“The market has proven unable to self-regulate,” stated Jean Feyder, ambassador of Luxembourg and president of UNCTAD’s trade and development board. “In the North, the state has played a major role in overcoming the financial crisis.

“In the South, it should be a key player in the financing of productive capacities, starting with industrialisation and the protection of infant industries,” he added.

For Supachai Panitchpakdi, secretary general of UNCTAD, whatever momentum there was for the reform of global economic governance is gone. “There have been no fundamental changes to the institutional architecture of economic governance. Some of the most significant moves take place at the regional level, such as more South-South integration.”

“While many developing countries enjoy export-led growth, the global economic and financial crisis represents a warning about this model of development. The promotion of domestic and regional demand could unlock savings and increase demand for imports. And countries should stimulate consumption.”

But Panitchpakdi hastened to add that the quest for a new developmental model is not a “denial of neo-liberalism by UNCTAD”. Rather, UNCTAD is attempting to view the crisis from the position of poor countries: “We are experiencing one of the deepest recessions since 70 years and they are not receiving more funds, neither more trade.”

The post-crisis scenario cannot be business as usual. “Developing countries have to depend more on themselves,” Panitchpakdi said. “This does not mean cutting North-South trade but to strengthen what is already there, since half of their trade is going to the South.” In Asia, recovery was aided by intra-regional trade.

Agriculture, which is one of the predominant modes of livelihood in Africa, provides a perfect example of the failure of the developmental model that has been pursued for more than three decades. “Who are the poorest?” asked Feyder. “Those that are hungry. And 75 percent of them live in the rural areas: small farmers, landless farmers, herders.

“We must give priority again to the development of food crops (as opposed to cash crops for export). At least 10 percent of official development assistance must go to agriculture. When agriculture is so weak, it must be protected against international competition – but for 30 years we have liberalised markets.”

Haiti is a case in point: tariffs have been reduced from 50 to three percent, making it one of the most open countries in the world.

Originally self-sufficient in rice, its production fell to less than 20 percent, with the rest being imported — particularly subsidised rice from the US. “Even Bill Clinton has recently recognised that the policy for Haiti he had pursued was a mistake and that Haiti must go back to food self-sufficiency,” Feyder said.

Food prices are another issue of concern. “What is the price that small farmers get for their products? The prices of food products are below production costs, both in the North and in the South. In the North farmers can go to their governments and get some compensation, but in the South they can’t,” Feyder explained.

He questioned the tendency of looking at food prices only from the point of view of consumers and striving for the cheapest possible food: “What matters is the price that producers are getting to cover their costs and sustain their livelihoods.

“The rampant liberalisation of markets is a problem. Maybe we have to disconnect countries from the world market as a measure against price volatility. Or create trade boards by which states can buy food products at certain level of prices and distribute them again. Or explore the possibility of stocking food products in silos.”

“This is unacceptable, not only because it brings about hunger but because financial markets are terribly distorting. We have to challenge the main dogma of the last 30 years that the market is always right. Financial markets, most of the time, are wrong and governments have the obligation and responsibility to build informed opinions on these prices.”

Anne Jellema, international policy and campaign director at ActionAid International, asked why civil society has been divided when “more than a billion people are going hungry”. “Some of us are for food sovereignty, others for food security; some like the MDGs (millennium development goals), others don’t.”

She warned against the habit of waiting for governments to act. “In Brazil, civil society has occupied land and told people to farm it. They have used that as a base to build political power to spur the state on. That model of organising the poor to demand their rights and taking part of the economy in their own hands is the way forward.”