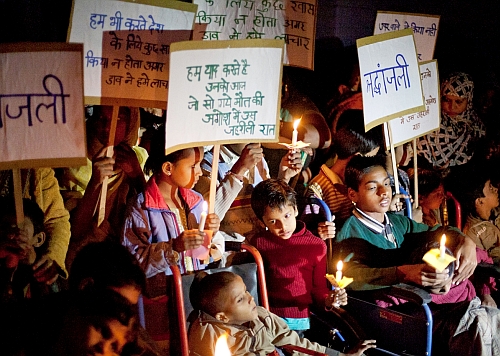 BHOPAL, India, Dec 2 2011 (IPS) - India’s sport stars have joined the survivors of the 1984 gas leak tragedy in this city, capital of the central Madhya Pradesh state, to protest against a sponsorship deal between Dow Chemical and the organisers of the 2012 London Olympic Games.

Dow had in 2001 acquired from Union Carbide, also a United States-based corporation, the pesticide plant which spewed poisonous cyanide gas over this city, killing at least 15,000 people and maiming many more.

Dow said in a recent statement that it “never owned or operated the facility in Bhopal” and that it acquired shares in Union Carbide after 470 million dollars were paid up by the original owners, in a settlement approved by the India’s Supreme Court.

But, survivors of the tragedy that occurred on the night of Dec. 2-3, 1984, accuse Dow of sheltering Union Carbide and failing to rectify toxic contamination of soil and groundwater in and around the plant.

A study conducted in 2009 by the Centre for Science and Environment, a leading Delhi-based non-governmental organisation, showed pesticide contamination in the groundwater in a three-km radius of the plant.

“As 100 percent owner Dow Chemical is sheltering Union Carbide that is absconding from charges of culpable homicide in Indian courts for the last 19 years,” said Rashida Bi, a former union leader and activist seeking justice from the perpetrators of the tragedy.

“Dow Chemical is also violating Indian laws by refusing to clean up the toxic contamination of soil and groundwater caused by reckless dumping of hazardous waste by Union Carbide,” said Rashida who has, since 1984, lost six of her family members to cancer.

“We have requested the prime minister and the Indian Olympic Committee to register protests with the London Organising Committee for the Olympic Games (LOCOG) for accepting Dow’s sponsorship of the Olympics, but they have not moved so far,” she said.

Balkrishna Namdeo, leader of the Bhopal Gas Peedit Nirashrit Pension Bhogi Sangharsh Morcha, a leading organisation representing the victims, said, “We are not against the London Olympics, but we are opposed to the tarnishing of the games through association with a criminal corporation.”

Activists have threatened to block trains in Bhopal, an important railway hub, from Saturday unless the central government records its protest with the organisers of the games.

The state’s Chief Minister Shivaraj Singh Chauhan has joined hands with the protestors and written to the union sports minister Ajay Maken demanding that India boycott the Olympics if Dow continues to be a sponsor.

“They have not met their liabilities and hence, such a company should not be allowed to be associated with the most prestigious sporting event of the world,” Singh said in his letter.

Support has also come from leading Indian sports stars. “They have gotten away with murder. For such devastation caused to our people I am protesting,” said Ashwini Nachappa, who holds national records in track and field events.

Dhanraj Pillay, former captain of India’s hockey team, said Dow should be spending money on improving the lives of the survivors of the tragedy rather than on sponsoring the Olympics.

“The Games should go on, but cannot the Olympics committee change their sponsor? If this company can spend millions on sponsorship, they can pay the victims who are suffering till today,” Pillay told IPS.

In a letter, 21 of India’s Olympic-level athletes have urged LOCOG to cancel Dow’s sponsorship of a fabric wrap around the Olympic stadium in London.

Britain’s shadow Olympics minister, Tessa Jowel, was reported to have written to the chair of the Commission for a Sustainable London 2012 asking for all documents relating to the decision to award Dow the sponsorship of the Olympic stadium wrap to be made public.

“It’s better that we have an unwrapped stadium, rather than a stadium wrapped in the continuing controversy of Dow Chemical’s sponsorship,” Jowell was reported to have written.