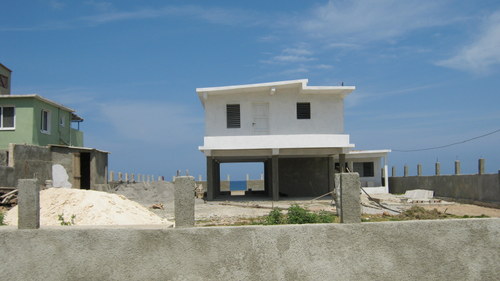 HAVANA, Apr 11 2012 (IPS) - One of the major challenges facing Cuba as it designs climate change adaptation policies is the preservation of its coastal ecosystems against the predicted rise in sea level and increasingly catastrophic extreme weather events.

With the country’s 5,500 km of coastline and 4,000 cays and islets, almost everyone on the Cuban archipelago feels their life is tied to the sea in one way or another. “It’s lovely, but it is also dangerous,” said 78-year-old Teresa Marcial, who lives on the coast in Santa Fé, in the northern outskirts of Havana.

For decades, Marcial has lived with the ocean practically lapping her patio. In 2005, floods caused by hurricane Wilma left her family and neighbours virtually on the street. “Huge waves swept everything away. We were taken by surprise. The water took away an extremely heavy wardrobe, which simply disappeared,” she told IPS.

Her son, Martín Pérez Marcial, added that they have decided to sell their house and move to a safer place.

“But as you can imagine, with the expectation that future hurricanes will be more intense because of climate change, no one wants to come and live here,” said a neighbour who did not mention his name.

A few blocks away, builders are constructing a house that is raised more than two metres above ground level, using part of an older house and strong pillars for support. “If there is flooding, the water can circulate freely underneath the house,” said the construction foreman, José Luis Martínez.

Behind the house, which is being built by “self help”, as private construction initiatives are called in Cuba, there is an outer wall of solid concrete and hard stone. “It saves on cement, and does not require steel, which rusts over time,” Martínez said.

The talkative builder showed how the base of the containment wall has spillways for drainage, to let water flow back and forth. At the corners, the walls are shaped like a ship’s prow, “to break up the waves.” Several houses in the vicinity have similar walls, which “cost a pretty penny,” Pérez said.

Santa Fé is at permanent risk of flooding due to hurricanes. Studies by state bodies put it among the coastal areas of the capital that face the greatest direct impact of tropical storms, and to a lesser extent of rising sea levels.

Carlos Rodríguez, a researcher on land use planning and the environment for the government’s Physical Planning Institute (IPF), says 577 human settlements could suffer the combined onslaught of rising sea levels and oversized waves from swells and storm surges associated with hurricanes.

In an interview with IPS, Rodríguez emphasised that according to a joint study by several Cuban scientific institutions, led by the Ministry of Science, Technology and the Environment and including IPF, an area of 2,550 square km of coast could be submerged by 2050.

By 2100, the flooded area could expand to some 5,600 square km, according to sea level rise projections, he said.

Out of the 577 vulnerable settlements, 262 have ground surfaces less than one metre above sea level within the first 1,000 metres from the coastline. “These are the ones we are flagging as sensitive coastal settlements,” said Rodríguez.

Out of these 262 low-lying towns and villages, 122 may be exclusively affected by the rise in sea level, with permanent loss of ground area, buildings, power grids and public services. “Immediate measures must be taken in these settlements for concrete regulation and adaptation,” he said.

Fifteen settlements are likely to disappear under water by 2050, and another seven by 2100. These communities must be relocated or protected, depending on their characteristics and importance, although most of them have few permanent residents and are basically beaches for local recreation, located on the lowest parts of the coast, he said.

Rodríguez stressed that adaptation measures must also be planned for inland areas impacted by the combination of higher sea levels and over-height waves from the swells and storm surges produced by hurricanes.

In these cases, adaptation must aim, among other things, at reducing the vulnerability of houses and buildings, creating protection systems, recovering and implementing drainage systems and carrying out essential works for the protection of the population.

“Every new investment and every plan for coastal areas in our country must necessarily take climate change forecasts into account. Twenty years ago we did not have the knowledge that we have now. We should not reproduce our vulnerabilities, but reduce them and learn to live with the risks,” Rodríguez said.

In his view, adaptation in the field of urban planning involves finding ways to resettle people in the same place, putting up lightweight installations in public spaces in the most exposed areas in already existing settlements and towns, and reducing both building density and the number of residents per block.

Plans also need to be made for the removal of some buildings to higher ground, and to ensure that designs for new building projects include the use of more resistant materials and stronger roofing from the outset, to cope with the combined actions of rain, wind and storm surges.

“There are also engineering solutions such as containment dikes, although they are more expensive,” Rodríguez said. He pointed out that all Caribbean islands must prepare for higher temperatures, recurrent droughts and shortage of drinking water, among other challenges accompanying climate change. “In Cuba, the biggest risks are concentrated in coastal areas and the eastern part of the island,” he said.

Rodríguez said Cuba can offer cooperation on climate change issues to the rest of the Caribbean region. “We have the trained human resources and the knowledge, as well as an organised society and political will to enable us to address the problems and identify affordable solutions,” he said.