Indigenous Youth Step up to Protect Their Roots 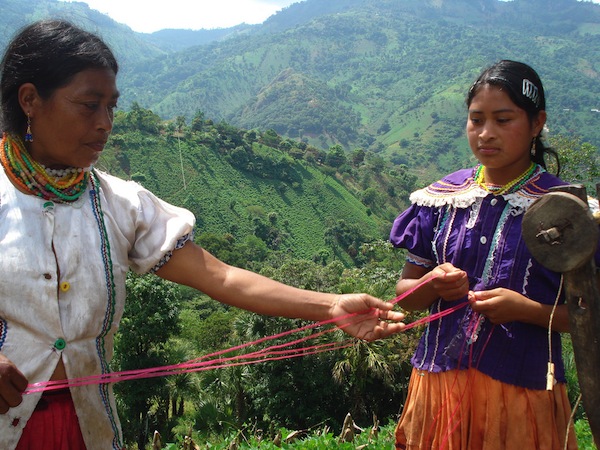 Indigenous people around the world not only face loss of language and culture but are also often deprived of their basic human rights. Above, two indigenous women in Guatemala. Credit: Danilo Valladares/IPS

UNITED NATIONS, Feb 17 2013 (IPS) - Indigenous youth from some of the world’s oldest living cultures are stepping forward to steer their communities past the threat of disappearance and into an age of coexistence with an increasingly globalised world.

Approximately 370 million indigenous peoples live in communities around the world – some in urban settings, some on reservations and others straddling both worlds.

They face many of the urgent social problems that exist among other disenfranchised minorities – poverty, lack of education, high unemployment, high rates of crime and a general lack of access to public services and resources.

Other issues are unique to the indigenous experience, including forced separation from homelands, loss of native languages, and histories of injustice, social exclusion and violence that have led to their modern day marginalisation.

In the year 2000, the United Nations (U.N.) created the Permanent Forum on Indigenous Issues (UNPFII), in which a committee of experts, nominated by governments and indigenous civil society, discuss critical issues and recommend actions to the U.N. system.

This year, the UNPFII is highlighting the role of indigenous youth as community leaders. It held a meeting in January where indigenous youth from seven regions of the world gathered to share their insights with members of the Forum and experts from related organisations.

All seven youth representatives expressed grave concerns about the rapid disappearance of indigenous languages vital to cultural unity, and with good reason – UNESCO estimates that every two weeks, one language disappears from the world.

Education systems have historically played a large part in the disappearance of indigenous languages, sometimes even forcing their extinction by severely punishing and shaming children for speaking native tongues or expressing indigenous identity in any way.

In Andrea Landry’s Anishinaabe tribe of Canada, only one fluent speaker of the native language remains. She is about 80 years old and still has not overcome the shame that was instilled in her as a child for speaking her own language, making it difficult for her to pass her knowledge down to younger generations.

Landry, the youth representative for North America, and many of her fellow representatives agreed that ideally, the state would provide bilingual education in schools attended by indigenous youth, though they acknowledged that the sheer number of regional indigenous languages often makes this feat challenging.

Funding community-based language programs through civil society organisations would be a good alternative, they suggested.

The youth were also gravely concerned about society’s lack of awareness and misrepresentation of indigenous peoples’ histories, cultures and current circumstances. They called for education systems to teach history and social diversity more thoroughly and accurately.

Landry told IPS that in studying for her master’s degree in communications and social justice, she was astonished by the absence of material on indigenous issues. She has tried to fill these gaps with supplementary materials but argued, “I shouldn’t be the one teaching these things.”

Steven Brown, youth representative from Australia’s Bundjalung and Yuin Nation tribes, raised concerns about the negative stereotypes that grow instead of a real understanding of indigenous peoples. Brown personally experienced the way indigenous youth internalise stereotypes such as being perpetually poor and undereducated.

That message that success is not inherently non-indigenous was articulated by all of the indigenous youth leaders, and achieving success, Brown said, “does not mean I forget where I’ve come from”.

In some communities where a large portion of the population speaks only the native language, another issue arises: access to important information on topics such as health care, employment opportunities, legal rights and public services.

Representative Niwamanya Rodgers Matuna, of the Batwa hunter and gatherer tribe in Uganda, described one example for IPS: how a lack of information in his tribe’s native language about medications and their proper usage has led his tribe to not trust drugs from outside of their community, which seem to quickly become ineffective.

Improper use and poor quality of antibiotic medications allow bacterial diseases to develop resistance, a phenomenon that has become a major issue in poverty-stricken countries but could be easily curbed by improving drug recipients’ access to information.

Through forums like UNFPII, indigenous youth leaders and the international human rights community are insisting that when language barriers not only prevent citizens from accessing their essential rights but in fact perpetuate their marginalisation, actions must be taken in conjunction with governments to eliminate these barriers.

Asia’s youth representative, Meenakshi Munda of the Munda community in India, added that she does not want her people to become reliant on government or international support. Rather, she sought resources for her community to empower them to become self-sufficient.

They are confident, however, that this learning process can and should be an exchange between equals and should not require the subjugation of a people or the elimination of its culture or history.

The world has much to learn from indigenous ways of life, which, despite their great diversity, share some common central ideas that are absent in most modern cultures.

Perhaps most significantly, indigenous peoples have tremendous respect for the earth and a deep connection to the land on which they live.

“We’re in a relationship with the land; it’s a living thing,” said Landry. “It’s not a matter of take, take, take. We give to the land and the land gives to us.”

Moreover, indigenous values often maintain great respect for elders and all things that possess the wisdom of time. Some may struggle to understand the importance of protecting indigenous cultures as the ancestors of modern civilisation.

But as Matuna pointed out, quoting an African proverb, “A river which forgets its source, dries soon.”