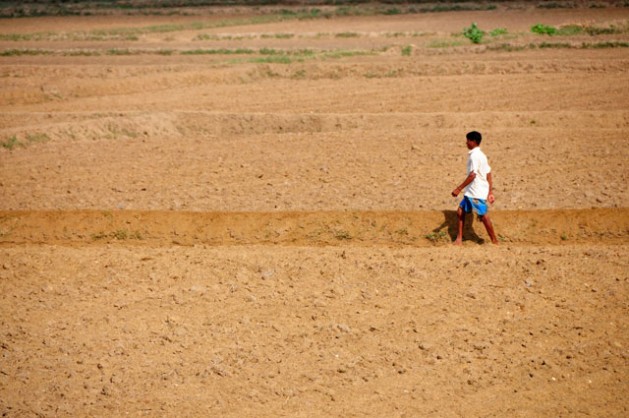 Parched earth has become all too common in arid regions of Sri Lanka. Credit: Amantha Perera/IPS

VAVUNIYA, Sri Lanka, Apr 7 2016 (IPS) - Sri Lanka is facing the heat from a scorching sun for the past one month. In recent times, the country has imposed power cuts after almost a decade. The main reason was the stoppage at a coal power plant, but engineers at the Ceylon Electricity Board (CEB) admit that the island’s hydro-power generation capacity is at such a critical low that without additional coal, diesel and renewable generation, the country’s full demand for power cannot be met.

In the south of the country, sea water has been seeping into the inland pumping stations causing degradation of drinking water. The water board said that parts of the southern province would have to endure water cuts as pumping stations try to deal with low water levels and sea water seepage.

Education minister, Akila Virag Kariyawasam, recently sent out a very unusual circular: he ordered all government schools to defer outdoor sports events till end of April or May. The reason given was warm weather like never experienced before.

Schools that are just days off from April holidays have begun to announce over public address systems asking students to remain within enclosures rather than venture outdoors.

April is usually a hot month. But this year has been exceptional.

“Hot weather prevailing around the country will continue till April, as the sun would come directly over Sri Lanka. The country’s temperature has increased by 3 °C during the day and 2 °C during the night than its normal value,” the government’s main information portal said.

According to the meteorological department, the annual average temperature is around 28.5C. The city readings were much higher than that with Anuradhapura 37C, Batticaloa 32C, capital Colombo 33C, Galle 33C, Jaffna 36C, Kandy 35C, Nuwara Eliya 24C (coldest location in the island, usually around 18C), Ratnapura 36C, Trincomalee 33C and Mannar 34C during the second week of March.

Weather experts have been at a loss to give a clear reason for the sharp rise. “The change in wind direction over the Indian Ocean could be one reason,” Sarath Premalal, director forecasting at the meteorological department said. Other contributing factors are the absence of cloud cover, rising ocean temperature due to El Nino and the position of the sun directly above the island.

The dry weather is likely to change with the onset of the monsoon, due from mid-May and not before that. Meanwhile, soaring temperatures impact power, agriculture and related sectors.

Already the country’s main reservoirs are mostly running below 30 per cent capacity. The two large reservoirs Victoria and Randenigala, have a higher storage capacity but the water needs to be conserved as a back-up for the harvesting season that begins in April.

CEB engineers’ union president, Athula Wanniarachchi, said that the government should consider a daily power cut of one hour. “This is the worst drought that we have had in five years, there should be awareness built among people on how severe the situation is,” he said.

But power cuts are politically controversial. This week, the CEB did in fact impose three hour cuts only to roll them back when the government said no and informed that it was decision to be taken at the cabinet level.

Power and energy minister, Rajith Siyambalapitiya, said that the situation was not as dire as some reports suggested. “Right now we need around 2,400 mega watts per day, if we can bring that down by around 400 mega watts we should be okay,” he told a public gathering in northern Vavuniya.

The government is also thinking of buying power from the privates sector and reviving reliance on diesel power generation. In 2014, Sri Lanka shifted heavily towards coal power generation which accounted 41 per cent of the national supply in March, oil accounted for around 38 per cent and hydro generation about 17 per cent.

There is a clear problem in shifting towards thermal oil based power generation – it costs more. In 2012, when the island faced a similar situation a third of its foreign exchange payments went for oil imports for power generation. The prevalent cheap oil prices could cushion this a bit, but not by a lot, according to Wanniarachchi.

Already essential commodities have shown price hikes and past experiences show that any anomaly in rains and the temperature causes harvest to fluctuate.

In 2014, when there was a minor drought overall paddy output in the island recorded a 19 per cent drop from 2013 according to the Food and Agriculture Organisation of the United Nations’ analysis. It was around 3.8 million tonnes, eight per cent below the five year average yield. Rice prices were 23 per cent higher that year.

In Vavuniya, a paddy farmer, Nagarajan Sivakumar, knows what it is to face such extreme weather. “We lose the harvest and we get into debt,” he said. In 2013, losses caused him to borrow Rs 500,000 (US$3500) from local lenders. He is yet to repay the loans taken at high interest.

In Vavuniya, where at least 40 per cent of the population derives their main income from agriculture, extreme weather can be deadly. In 2014, when there was a moderate drought, the World Food Programme, ministry of economic development, ministry of disaster management and other partners carried out a survey titled “Drought, food security and livelihoods affected by erratic weather, Sri Lanka –April 2014”.

In the affected regions in the northern, eastern and north western provinces, over 768,000 persons were identified as food insecure, double the number a year back, the report said. It also said that in the same regions comprising of 15 districts, 18 per cent of the households were consuming low-calorie diets.

The report recommended authorities take measures to mitigate the impact of extreme weather events. Such advice, it appears, is yet to reach those who can affect them.