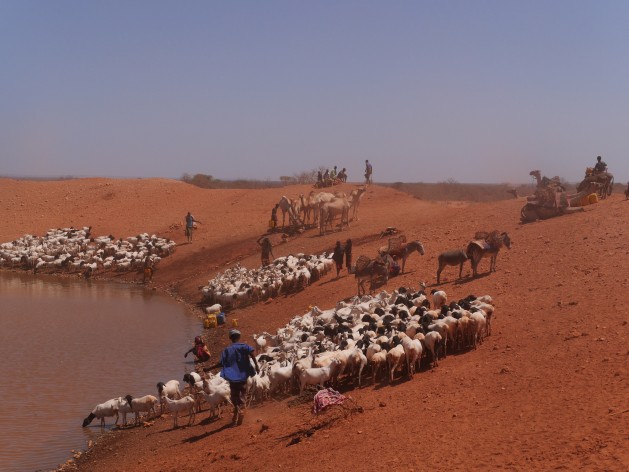 The pastoralists of Ethiopia’s Somali region are forced to move constantly in search of pasture and watering holes for their animals. Credit: William Lloyd-George/IPS

UNITED NATIONS, Apr 28 2016 (IPS) - Ten presidents and prime ministers from around the world will work together to resolve the growing global water crisis amid warnings that the world may face a 40 percent shortfall in water availability by 2030.

The figures continue to be staggering:  despite improvements, at least 663 million still do not have access to safe drinking water.

And projecting into the future, the United Nations says an estimated 1.8 billion people – out of a total world population of over 7 billion – will live in countries or regions with water scarcities.

The crisis has been aggravated by several factors, including climate change (triggering droughts) and military conflicts (where water is being used as a weapon of war in several war zones, including Iraq, Yemen and Syria).

"If the water service fee is beyond a household’s ability to pay, it is a human rights violation.” -- Darcey O’Callaghan, Food and Water Watch.

Referring to the two extremes in weather patterns– droughts on the one hand and floods on the other – Eliasson said one of his colleagues who visited Pakistan after a huge flood, remarked: “Too much water and not a drop to drink.”

When world leaders held a summit meeting last September to adopt the UN’s post-2015 development agenda, they also approved 17 SDGs, including the elimination of extreme poverty and hunger and the provision of safe drinking water to every single individual in the world – by a targeted date of 2030.

But will this target be reached by the 15 year deadline?

Sanjay Wijesekera, Associate Director, Programmes, and Chief of Water, Sanitation and Hygiene at the UN children’s agency UNICEF, told IPS: “As we enter the SDG era, there is no doubt that the goal to get ‘safely managed’ water to every single person on earth within the next 15 years is going to be a challenge. What we have learned from the Millennium Development Goals (MDGs) is that water cannot be successfully tackled in isolation.”

He said water safety is compromised every day from poor sanitation, which is widespread in many countries around the world, particularly in South Asia and sub-Saharan Africa.

Currently, nearly two billion people worldwide are estimated to be drinking water which may be faecally contaminated.

As a result, UNICEF and others working on access to safe water, will have to redouble their efforts on improving people’s access to and use of toilets, and especially to end open defecation.

“As we address water, sanitation and hygiene, we must also take into account climate change. Droughts, floods, and extreme weather conditions all have an effect on the availability and the safety of water,” said Wijesekera.

He also pointed out that some 160 million children under-5 live in areas at high risk of drought, while around half a billion live in flood zones.

Asked how best the water crisis can be resolved, Darcey O’Callaghan, International Policy Director at Food and Water Watch, told IPS the global water crisis must be addressed in two primary ways.

“First, we must provide clean, safe, sufficient water to all people because water is a human right. Affordability is a key component of meeting this need. Second, we must protect water sustainability by not overdrawing watersheds beyond their natural recharge rate.”

“If we allow water sources to run dry, then we lose the ability to protect people’s human rights. So clearly, we must address these two components in tandem,” she said.

To keep water affordable, she pointed out, it must be managed by a public entity, not a private, for-profit one. Allowing corporations to control access to water (described as “water privatization”) has failed communities around the globe, resulting in poor service, higher rates and degraded water quality.

Corporations like Veolia and Suez — and their subsidiaries around the world—are seeking to profit off of managing local water systems, she said, pointing out that financial institutions like the World Bank and regional development banks often place conditions on loans to developing countries that require these systems to be privatized.

“But this is a recipe for disaster. Profits should not be the priority when it comes to providing water and sanitation services to people”, said O’Callaghan.

Asked if the public should pay for water, she said there is no longer any question that water and sanitation are both human rights. What the public pays for is water infrastructure upkeep and the cost of running water through the networks that deliver this resource to our homes, schools, businesses and government institutions.

“The UN has established guidelines for water affordability –three percent of household income—and these guidelines protect the human right to water. If the water service fee is beyond a household’s ability to pay, it is a human rights violation.”

One approach that has shown promise are public-public partnerships (PPPs). In contrast to privatization, which puts public needs into the hands of profit-seeking corporations, PPPs bring together public officials, workers and communities to provide better service for all users more efficiently.

The benefits of scale and shared resources can deliver higher public efficiencies and lower costs. These public partnerships, whether domestic or international, improve and promote public delivery of water through sharing best practices, said O’Callaghan.