Mapping and Responding to Climate-Induced Migration 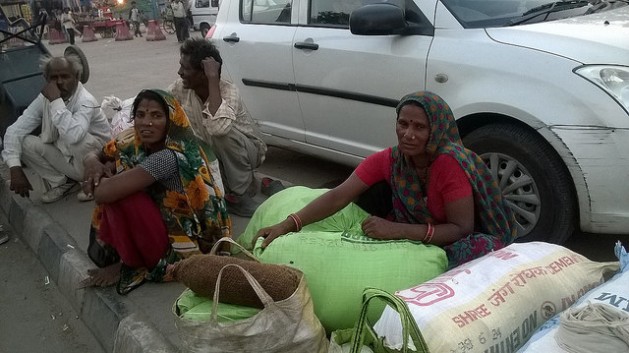 UNITED NATIONS, May 18 2017 (IPS) - As the world focuses on conflict-related migration and displacement, with an unprecedented 60 million fleeing from war and persecution, others are pointing to a less discussed trigger of population movements: climate change.

As part of a panel series, UN University (UNU) brought together academics and researchers to discuss the importance of the links between climate change, migration, and displacement.

“This three-sided nexus…gives the possibility to not discuss climate change without referring to migration and human rights and vice versa—the ties are so strong, the interlinkages are very present in all the case studies we are researching,” UNU-Environment and Human Security’s (EHS) legal expert Cosmin Corendea told IPS.

According to the Internal Displacement Monitoring Center (IDMC), an average of 22.5 million people have been displaced each year by climate or weather-related disasters in the last seven years, equivalent to 62,000 people every day.

Climate change, which causes more frequent extreme weather events, is only expected to make such trends worse in the coming decades. The International Organization for Migration (IOM) estimates that between 25 million and 200 million people could be displaced by 2050 because of climate change.

Niger is one such country experiencing the effects of climate change from recurrent droughts to the slow disappearance of Lake Chad.

Tamir Afifi from the German Federal Office for Migration and Refugees (BAMF) told participants that communities lost their livestock and thus their primary source of livelihoods as a result of the diminishing lake.

“They completely lost their identity,” he said, adding that migration became a strategy to cope with food insecurity and climate change.

“Since the environment stresses have become so strong… that when people move, they actually don’t come back or they don’t come back for a while. It is not associated anymore to the seasonal events as it used to be,” Afifi continued.

In the U.S., one Native American tribe is being forced off their home on Isle de Jean Charles off the coast of Louisiana due to rising sea levels, law professor Maxine Burkett told attendees. The island has lost 98 percent of its land since 1955.

Generally speaking, climate change alone does not trigger migration, but rather a combination of economic, educational, and cultural factors, panelists said.

The UN Economic and Social Commission for Asia and the Pacific (ESCAP) found that 37 percent and 26 percent of people in Kiribati, Nauru, and Tuvalu cited economic and educational reasons for migration, respectively, while only 18 percent cited climate change.

Bishawjit Mallick from the Karlsruhe Institute of Technology (KIT) noted that in Bangladesh, it was those with less resources who moved after the devastating Cyclone Aila in 2009.

However, this complex multi-causal nature of migration may not be the case for much longer, said Burkett.

“Climate change is not a static phenomenon, it is a change…so what may seem today a deeply entangled, thorny, and multi-causal event may soon have an undeniable climate signal,” she told attendees.

Corendea stressed the need to create language around environmental migration which could help create the corresponding migration policies.

Though IOM has a working definition of an environmental migrant, there is still no internationally accepted definition.

As a result, language around climate change is still absent from the Global Compact for Safe, Orderly, and Regular Migration, an intergovernmental document comprehensively addressing international migration currently under negotiation.

Panelists also highlighted the need for bottom-up approaches to address the complex issue.

Afifi stressed that such problems cannot be solved without involving the communities themselves.

Correndea suggested a regional approach in which nations share resources and information, helping create a migration framework and a preemptive measure in the case of displacement or relocation.

“Individually you can’t do it, internationally is too slow—so you have to meet in the middle in order to move the process forward,” he told IPS.

“Before becoming a humanitarian affair, [regions] can create a preemptive measure in order to assist people in case an extreme climate event happens. And the science shows that this will happen,” Corendea concluded.