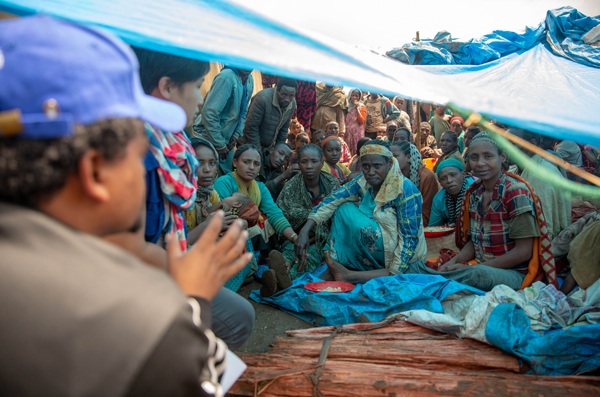 Addis Ababa, Jul 18 2018 - Clashes between communities on the border of Ethiopia’s Southern Nations, Nationalities, and Peoples’ Region (SNNPR) and Oromia regions have forced some 970,000 people to flee their homes since April 2018, most becoming displaced in June alone.

Rapid woreda (district) level assessments conducted by IOM’s Displacement Tracking Matrix (DTM) teams have found that 822,187 people are displaced in Gedeo zone (SNNPR region) and at least 147,040 people in West Guji (Oromia region). Due to ongoing security concerns and access problems, IOM’s DTM teams could only assess internal displacement in four of the six woredas in West Guji where people are displaced.

In both zones, most of the displaced population are staying with local communities (Gedeo: 514,446; West Guji: 84,681), while the remainder are sheltering in collective sites (Gedeo: 307,741; West Guji: 62,359) such as schools, government properties, spontaneous sites and disused or unfinished buildings.

The buildings in the collective sites generally are not fit for human habitation and are extremely overcrowded – forcing many people to sleep outside on dirt, rarely with anything but a single sheet of tarpaulin shielding them from the rain.

Mujib is sheltering in a small four by five metre area of dirt ground that he shares with 26 other displaced people, many of whom are his former neighbours. “This place is very cold. We don’t have enough food, and our children are not getting proper nutrition,” said Mujib. Part of the 26 is Mujib’s family of eight, including his mother, brothers, wife and two-year-old daughter. “I do not know what the impact of all this is going to be on the lives of our children. This is hard to imagine right now,” he added.

The assessments identified 80 collective sites and 103 host community locations in Gedeo and 21 collective sites and 60 host community locations in West Guji. Food was reported as the primary need in both zones. This is in addition to major shelter needs, as well as concerns over access to safe sanitation. A more detailed assessment of displacement sites in both zones is currently underway, which will produce more qualitative data in terms of how many people are displaced and their needs.

Since June, IOM has been scaling up its response in Gedeo and West Guji. Over the last two weeks, in addition to assessments, IOM has constructed over 190 latrines of a planned 263, four communal shelters of a planned 40, two communal kitchens, as well hosted workshops with the government on site management.