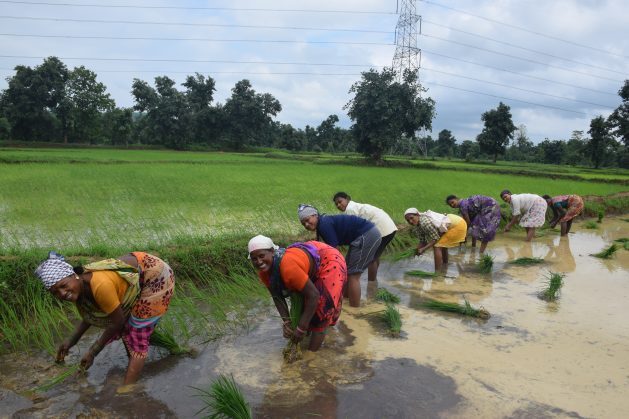 Women log 3,300 hours of work on farm labour during a crop season, compared to the 1,860 hours logged by men. Credit: Stella Paul/IPS.

Feb 21 2020 (IPS) - Across cities and villages in India, an impending water crisis is at our doorsteps. India will face a water shortfall of almost 50 percent by 2030, if our water use continues its current pattern. Last year, Chennai and Bangalore showed us what water scarcity looks like; the statistics are no longer just numbers on paper, they have become our reality.

Even as we’ve started to acknowledge the water crisis in urban India, we’re still disconnected from how our rural communities are affected by it. Water is their life and their livelihood. Agriculture accounts for over 80 percent of India’s freshwater use, and more than half of India’s rural population depends on farming as a vocation.

Sixty percent of India’s districts face a problem of either over-exploited groundwater or poor water quality. This is because 63 percent of water for irrigation depends on groundwater (and not on dams or canals).

Women bear the burden of the water crisis

As we, at Hindustan Unilever Foundation, started our work to promote water security and wellbeing for rural communities across the country, it became evident very quickly that women bear the brunt of this escalating crisis.

Women fetch water for their families: Women in villages can end up spending up to four hours a day fetching water for their drinking needs. These are hours that could be spent going to

Evidence from India indicates that women are not just integral to addressing the country's water challenges, they are probably the only ones who can do it—at scale

school, or at work. This opportunity cost prevents them from embracing opportunities that could lead to their socio-economic progress.

Women work longer in agricultural fields: An Oxfam study assessed that women log 3,300 hours of work on farm labour during a crop season, compared to the 1,860 hours logged by men. A growing water crisis will impact their ability to irrigate their fields or find work on fields that require irrigation. This could have far reaching consequences on an already stressed rural agrarian economy.

Women produce 60-80 percent of the food and 90 percent of the dairy products in our country. They have a high stake in solving the water crisis, and they’ve proven to be effective champions of solutions for their families and communities. Evidence from India indicates that women are not just integral to address water challenges, they are probably the only ones who can do it—at scale.

Women are effective evangelisers: A UNICEF study carried out in India in 2013 reported that when trained and taught about the importance of water management, women teach their children and families the importance of the same. This makes them a critical lever to inculcate water awareness among future generations.

Women mobilise government funds: Outcomes of development programmes in West Bengal indicate that women can constructively influence public officials to provide government funds for employment. They have used this money to build water supply structures such as ponds and reservoirs that provide the water required by their communities. Nationally, women generate 47 percent of MGNREGA person days, and have mobilised over 53,000 crore from 2006 to 2012 to build structures that address their community’s water needs.

Women effectively manage and maintain water infrastructure:  UNICEF’s work with local government institutions run by women demonstrated their effectiveness as mechanics. Pump maintenance and repair, which earlier took over a month to fix, was done by women mechanics in under 24 hours. In Jharkhand’s Lava panchayat, the absence of operable hand pumps made village members resort to drinking water from unhygienic sources. The women formed a group with representation from every panchayat to maintain 450 pumps. They ran their village spare stores and met the collective domestic water needs of 130 villages.

Women are constructive collaborators: Research conducted in the year 2000 on water supply projects in Gujarat across 900 villages found that including women in technical and decision-making capacities improved the impact of projects. Women spent more time than men in cleaning and maintaining the canals, supervising irrigation, collecting water taxes, and building water percolating structures.

Women are enthusiastic adopters of new technologies and sustainable farming methods: A 2017 report on the role of women farmers in attaining the Sustainable Development Goals studied 39 sources and concluded that the presence of women is crucial to changing agricultural practices in rural India. With the right knowledge and technical training, women-led collectives have driven changes in cropping practices. Women also showed greater willingness to switch to organic inputs and grow climate-resistant crops, like traditional varieties of millets, that can reduce their water consumption.

At Hindustan Unilever Foundation, our experience from project partnerships with nonprofits across the country has shown that women-led community institutions and women farmers have achieved significant results in water savings, while promoting sustainable agriculture within their communities.

We need women to lead India’s jan aandolan (people’s movement) on water—not because they are women, but because they can lead our generation’s movement for a more secure and water conflict-free society. As the Government of India seeks inputs for its National Water Policy, we do hope that women are at the front and center of India’s new water governance and regulatory framework.

Arpit Jain is a programme lead at Hindustan Unilever Foundation. He supports programmes which aim to build scalable solutions to address India’s water challenges. He graduated from the National Institute of Technology Karnataka, Surathkal, and has studied Development Management at the Indian School of Development Management. He is also Young India Fellow, and has explored the worlds of strategy consulting, entrepreneurship, and philanthropy.

Reshma Anand is a business school graduate with over 20 years of leadership experience in mission-driven nonprofits, social ventures, and philanthropic organisations. She currently heads Hindustan Unilever Foundation, a nonprofit focused on water conservation and governance. Previously, Reshma founded two social ventures including a specialist advisory firm on sustainable social responsibility and an accelerator for agri and artisanal micro-entrepreneurs. Reshma is an Economics graduate from the University of Delhi, an MBA from IIM-Bangalore, an Aspen Fellow, and a TED India Fellow.