PENANG, Apr 3 2020 (IPS) - Martin Khor Kok Peng passed away just after the end of the first quarter of 2020. He leaves behind an unusually rich legacy. Atypically for people mainly working in the worldideas, he was also a very practical and pragmatic activist who successfully built and sustained several important initiatives which will live on after him. 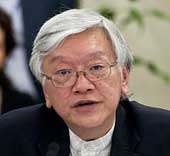 Martin was widely well known,both in Malaysia and internationally,and will be remembered for his commitment to a variety of causes perhaps best summed up by the concept of sustainable development, adopted by world leadersat Rio in 1992, and reaffirmed in Johannesburg in 2002, Rio again in 2012 and, most recently, through the Sustainable Development Goals declared in 2015.

Born in 1951, Martin’s passing,less than a year after the demise of his mentor and close collaborator, the nonagenarian Mahathir contemporary, S M Mohammed Idris, suggests the end of an era, not only in Malaysia, but also beyond.

Already there are many pronouncements about the end of the Third World, of the solidarity of the global South, and most recently, about the related demise of multilateralism, especially as it was transformed in the 1970s when the United Nations committed to a New International Economic Order, thanks to the G77 caucus of developing countries at the UN.

Paths not taken
Reflecting on Martin’s career path, one cannot but be struck by the choices he made, and by paths not taken. Leaving his hometown of Penang, Martin wasa pre-university classmate of current Prime Minister Lee Hsien Loong in Singapore, before going to Cambridge together.

Later, after a few months in Singapore’s civil service during 1974-1975, which almost surely would have led him to a cabinet position in Lee’s cabinet, Martin ‘broke his bond’ to return to Malaysia to start teaching for a pittance at the Science University of Malaysia (USM).

From there, he began his lifelong engagement with the Consumers Association of Penang (CAP) and Friends of the Earth, Malaysia (SAM), collaborating closely with Haji Idris, to wage efforts to protect Penang, and later the countryagainst ecological and other disasters in the name of development.

From local to global
Followingan international civil society solidarity conference in 1984,Third World Network (TWN) was born and rapidly developed by Martin to promote collective solidarity to protectdeveloping countries’ national interests as the global South came under siege with the neoliberal ascendance of the 1980s.

The South Summit in Kuala Lumpur in 1986 established the South Commission worked under former Indian Prime Minister Manmohan Singh which recommended establishing the South Centre as an intergovernmental policy research and analysis institution for developing countries headquartered in Geneva and chaired by Tanzanian President Julius Nyerere. Years later, Martin took over the South Centre in 2009, strengthening its finances, capacities and impact, by creatively mobilizing resources.

The personal is political
Martin’s widow, Meenakshi Raman was a victim of Malaysian political repression in 1987. But without personal rancour, Martin worked closely with the Mahathir and subsequent Malaysian administrations, especially on internationalcauses, includingtrade, intellectual property, biopiracy and climate change.

Martin touched many, inspiring all by his tireless commitment. He was often more than happy for others to getcredit for his discreet efforts behind the scenes with relevant research and skilled drafting. His persistence was legendary, but everyone knew his efforts were not for personal gain.

Martin waswell known for his indefatigable energy and meticulousness in preparing policy and advocacy briefs on many key matters of concern to developing countries, often working late into the night as necessary. This reputation gained him access to many government and other leaders.