Sudan May Have Banned FGM, but the Harsh Practice Continues 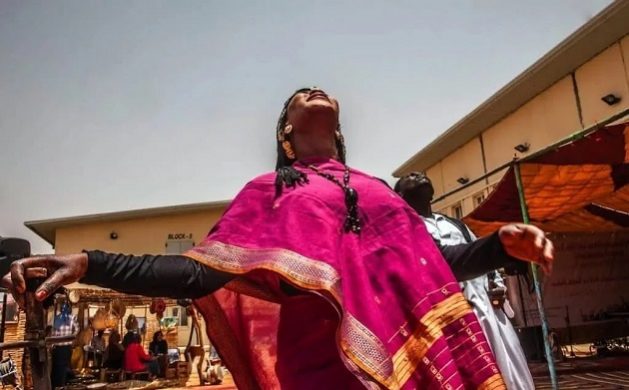 A performance at a photo show in El Fasher, Sudan, 2018. The new transitional government of Sudan criminalized female genital mutilation this spring, but the practice has not ended. Credit: MOHAMAD ALMAHADY/UNAMID

Aug 18 2020 (IPS) - Just four months ago, Sudan took the monumental step to ban female genital mutilation, a painful, unnecessary and dangerous procedure that leaves lasting scars. Generally carried out on girls before they reach puberty, genital mutilation is now punishable in Sudan by up to three years in prison and subject to a fine.

In a country where 88 percent of women between 15 and 49 years old have undergone some form of genital mutilation, according to the United Nations Population Fund, the new law is considered a huge progressive step toward democratic reforms a year after a revolution ousted the dictator, Omar al-Bashir.

But any law is only as good as its enforcement, and this one faces challenges that include not only cultural resistance but also the effects of a pandemic that enable abuse to happen behind closed doors.

The new law became enforceable upon final ratification, on July 10, 2020, almost three months after it passed. In the interim period, those caught performing FGM, as it is known, risked only confiscation of medical equipment and required educational training.

Then came the pandemic. As it began ravaging the globe, Sudanese schools closed early, and it appears that many families took this moment to have girls cut.

According to the World Health Organization, FGM is a procedure that intentionally alters or causes injury to female genital organs and has no medical basis. There are three main types, ranging from removing the clitoris (type one) to partly sewing up the vaginal opening by cutting and repositioning the labia (type three). The practice is not condoned by any religious texts but is carried out mostly in Muslim communities in parts of Africa, the Middle East and sections of Asia.

In many communities, it is regarded as a prerequisite for marriage. It is generally performed without anesthetics by traditional “cutters” with no medical training or equipment, and the girls are often forcibly restrained.

FGM’s effects are significant and enduring. Tamador Ahmed Abdalla, a child protection specialist with Unicef in Sudan, told PassBlue in a phone interview that cutting leaves both physical and mental scars. In the most severe cases, she said, “They lose their lives because of the bleeding or maybe they get tetanus from the things the midwife uses.” More often, they experience intense pain when they start their period, have sex and go through pregnancy and give birth.

The mental trauma is equally severe. “That moment of your life which has been physically violent on your body — two women physically holding you down, keeping you on the bed and trying to do something to you that you are not aware of . . . it lives with you,” Abdalla said.

Efforts to outlaw the practice in Sudan started in 1946, when legislation banned some forms of FGM but went largely unenforced. With the reintroduction of Sharia law under the regime of President Bashir, attempts to criminalize FGM in 2002, 2009 and 2015 failed. (Bashir is now in prison in Sudan for corruption charges and awaiting other trials.)

Sufian Abdul-Mouty, a representative of the UN Population Fund (UNFPA) in Sudan, told PassBlue via email that although there is “no precise data” on instances of FGM since the pandemic began in March, there are “anecdotal reports from UNFPA’s partners . . . that show an increase in received reports of cases in Khartoum and other states.” (Khartoum is Sudan’s capital.)

Abdalla echoed this view, telling PassBlue that Unicef’s information shows numbers rising in the Sudanese states of White Nile, Khartoum and Jazeera. The reported increase led many advocates who track the practice to think the surge was due to people taking advantage of children being out of school during the pandemic, as was widely reported to be the case in Somalia.

However, Jarai Sabally, a program officer from Donor Direct Action, which promotes women’s rights, suggested that the pandemic only jump-started an FGM season that takes place each summer in Somalia as well as Sudan. According to Hawa Aden Mohamed, the founder of the fund’s Somali partner, the Galkayo Education Center for Peace and Development, when schools are closed parents traditionally take their children to rural areas where FGM usually occurs.

“The only difference is, this time around schools closed early due to the Covid-19 outbreak,” Mohamed said. “Therefore, many parents living in the urban areas sent their children to rural areas earlier than usual, which resulted in the girls getting cut, and that is why we are seeing this sudden increase early in the summer.” The UNFPA and Unicef confirmed that it is normal for families to perform FGM on girls during school holidays.

If the new law had been enforceable earlier, it would likely have prevented many girls from being cut and the perpetrators remaining at large during this peak time for FGM.

For Sudan’s new law to be useful, it must be supported by robust educational and cultural reforms, experts say, a challenge made more difficult by the pandemic. (Sudan currently has 12,033 confirmed cases of Covid-19 and 786 deaths in a population of 43 million.)

Abdul Mounty of the UNFPA highlighted the difficulties to PassBlue: “Advocacy and awareness on the enforcement of the law can cause an increase in the practice because of the fear of social exclusion or social stigma for not conforming to the norm, which may be stronger than the fear of fines and imprisonment. The government needs to be very careful, focusing first on intensive community awareness to increase the acceptance and demand for the law.”

There is still a large stigma attached to girls who have not undergone FGM. According to Abdalla of Unicef, if a husband finds that his new wife has not been cut, he will sometimes try to return her to her family and ask for her to undergo FGM. Conversely, anecdotal surveys conducted by Unicef with university students in Sudan suggest that a younger generation of men prefer to have a relationship with an uncut girl. While this may, as Abdalla suggested, affect the prevalence rate of FGM in ensuing years, it could also create a new stigma for those girls who have been cut.

Raising awareness of FGM’s lasting damage is particularly important for advocates who are trying to dispel myths about the practice. But with the news media now dominated by pandemic updates, it’s hard to get mention of the new law.

“Every single thing is about coronavirus, and that is shrinking the space for other programs and other advocacy messaging,” Abdalla said. “We need to work closely with the media, NGOs and even in the schools to orient teachers and parent councils in the community.

“We need to work with them to introduce them to the law and to help them understand what it means to have this law in place because there are some people who might misuse this opportunity and misinform communities that the law is coming to criminalize parents.”

Similarly, Nahid Jabralla, the founder and director of the SEEMA Center for the Training and Protection of Women and Children’s Rights, based in Sudan, pointed out that FGM is not part of the national education curriculum, which she thinks needs to change.

“Ending FGM is not only a matter of the law,” she said. “We need efficient mechanisms, we need resources, we need proper partnerships that include governmental bodies, civil society, community-based organizations, people on the ground . . . [and] international actors [UN agencies and other NGOs]. We need to go for it and push for it, taking the initiative — and this includes academic institutions. This has to be part of the curricula, in general and higher education.”

Another problem is the lack of official data and research that would enable risk-mapping and help campaigners target areas with the highest rates of the practice.

Abdalla pointed out that while the overall rate of FGM is high in Sudan, it varies among communities and states. This disparity often results in parents traveling to certain states to have their children cut. In one case, Abdalla said a woman in Khartoum wanted to have her five daughters cut. The midwife she went to refused, so the mother took the girls to a different state, White Nile, to find someone who would do the job. Fortunately, several officials challenged the mother with the new law and prevented it from taking place.

Such official intervention shows a sea-change in the government approach, giving activists hope that this new law is more than empty words. Jabralla of SEEMA thinks the new approach will succeed in Sudan because of a reframing of FGM as a human-rights violation rather than as a cultural practice. A technical adviser for the National Program for Abolition of FGM (a joint program with the Sudanese government and Unicef) from 2004 to 2010, she knows the issue well.

Previous governments in Sudan had used FGM as “a tool of suppression,” she told PassBlue, and even the UN was slow to recognize the practice as a human-rights violation. In 2008, however, she said, human-rights campaigners in Sudan pushed back against fundamental Islamist groups that had attempted to legalize certain forms of FGM, leading to the creation of the national anti-FGM agenda.
Since then, the momentum for change, extending to efforts to stamp out child marriage, has been growing.

Jabralla admitted to being “exhausted” from the battles but still positive. “We have the space, we do not need any permission from anyone, even the government,” she said. “Now the law is there because of our will as civil society, as actors, we have the law, and of course it standing alone will not solve anything, but taking it with a genuine campaign I think we can join the world at the UN Sustainable Development Goals summit in ending FGM in 2030.”

This story was originally published by PassBlue