If Trump Delivers His Last Hurrah to an Empty United Nations, Will it Still Make a Sound? 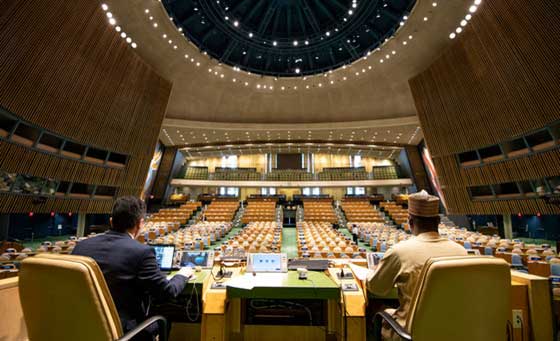 A General Assembly session in a locked down United Nations.

UNITED NATIONS, Aug 14 2020 (IPS) - There is no love lost between the United Nations and US President Donald Trump.

When he addressed the high-level segment of the UN General Assembly in September 2018, Trump falsely told delegates that “in less than two years, my administration has accomplished more than almost any administration in the history of our country”

The misleading statement triggered loud laughter from world leaders and delegates from 192 countries—perhaps with the sole exception of the US delegation which, not surprisingly, stayed mum.

But as he does with all negative reactions, Trump later gave it a spin. He said the delegates did not laugh at him, they really laughed “with him”.

That was another big lie – even as the Washington Post, which keeps track of his false statements in its fast-growing data base, says Trump has uttered over 20,055 “false or misleading claims” so far (and counting).

And as an avowed unilateralist, Trump abhors multilateral institutions.

Since he took office back in January 2017, he has either de-funded, withdrawn from, or denigrated several UN agencies and affiliated institutions, including the World Health Organization, the UN Relief and Works Agency for Palestinian Refugees (UNRWA), the World Trade Organization (WTO), the UN Educational, Scientific and Cultural Organization (UNESCO) and the UN Human Rights Council, among others.

Even though the UN Secretariat in New York, along with myriads of agencies worldwide, are working remotely, Trump is now planning to address the General Assembly in mid-September – in person.

Kelly Craft, the U.S. ambassador to the U.N., told a virtual event last month that Trump would be “the only world leader to be speaking in person,” pointing out “this is the 75th anniversary (of the U.N.), so it makes it even more special,” according to a report in Politico.

But the UN has maintained, irrespective of who addresses the next 75th General Assembly sessions in person, the building will still have to be “largely empty” because of the continued COVID-19 lockdown since end March.

As the old saying goes: If a tree falls in the forest, and no one is around to hear it, does it still make a sound?

In a vibrantly-sarcastic comment, Kul Gautam, a former UN assistant secretary-general, told IPS: “Let Trump’s address at the 2020 UN General Assembly be his last hurrah in an empty GA Hall with world leaders mocking him from afar, and bidding him adieu!”

Gautam pointed out that American leadership was decisive in creating and sustaining the post-World War II architecture of multilateral diplomacy with the United Nations as its centerpiece.

“Ever since Franklin Roosevelt coined the term “the United Nations” and Harry Truman signed its Charter, making the US the first country to ratify it, all American presidents, Republicans and Democrats alike, have made some positive contribution to strengthening the UN and the multilateralist world order,” he added.

President Donald Trump will go down in history as the sole American President who made zero contribution to strengthening the UN, declared Gautam, a former Deputy Executive Director of the UN children’s agency UNICEF and author of: ‘Global Citizen from Gulmi: My Journey from the Hills of Nepal to the Halls of the United Nations’.

With US presidential election campaign virtually grounded due to the spreading coronavirus pandemic, Trump may be looking at the UN as a global political platform to advance his re-election bid, scheduled for November 3, as he has fallen far behind his Democratic rival Joe Biden.

That may be an irony of ironies because of Trump’s distaste towards UN institutions and more importantly, his virulent attacks on people from UN member states, including Haitians and Africans.

At a 2017 White House meeting, Trump apparently said all Haitians “have AIDS’; that Nigerians should “go back to their huts in Africa’; and also questioned why US should welcome people from “shithole countries” in Africa, according to a report in the New York Times June 20.

At the United Nations, the African Union (AU) alone represents 55 member states in the world body.

Dr. Alon Ben-Meir, a professor of international relations at the Center for Global Affairs at New York University (NYU), told IPS: “As usual, I’m afraid that Trump will embarrass himself and the United States with his brash and often incoherent statements.”

“There is no doubt in my mind that he will boast about how he handled the coronavirus, and he may very well say that America handled it better than any other country, when in fact the precise opposite is true,” he said.

Given his low numbers in the polls, he will try to boast about America’s military strength, and probably the ‘wonderful’ trade deals that he made.

“I suspect that, just like (in September 2018), many of the assembled will laugh and dismiss much of what he will say,” declared Dr Ben-Meir, who is also Senior Fellow at the World Policy Institute.

Trump, who predictably changes his mind ever so often, may still decide to abandon the idea of physically addressing the UN.

The damage caused to these initiatives and institutions by Trump, he argued, will take a long time to heal and remedy, “but I am confident that over the long haul, good sense will prevail over this historic aberration.”

Asked about Trump’s plans to address the General Assembly in person, UN Deputy spokesperson Farhan Haq told reporters July 30: “I don’t want to speculate on what the future will hold. As you know, the Secretariat will be in touch, basically through the Office of the President of the General Assembly, with the Member States on their representation. “

When it comes to it, he said,” we have made clear what the conditions in the building are, what the need is for a scaled back ceremony.”

But Member States, he pointed out, are aware that they have different options, including recorded messages or, in some cases, appearances.

“We trust and expect that all Member States will abide by the need to keep the numbers low, and we’ll see what they do in terms of their preparations,” Haq noted.