Nuhara Syeda is with HarvestPlus, which is part of the CGIAR* Research Program on Agriculture for Nutrition and Health (A4NH). 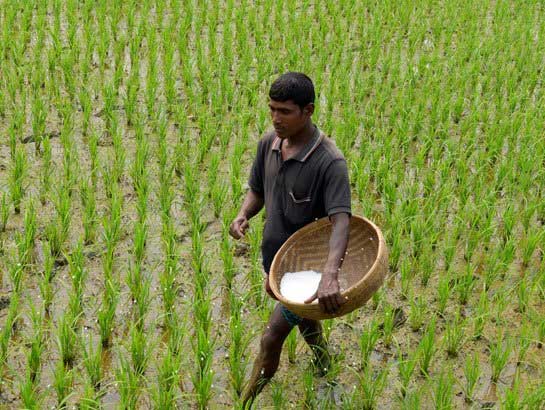 According to the Director General of BRRI, Dr Muhammad Shahjahan Kabir, it was momentous to release the 100thvariety- BRRI dhan100- during Mujib Year—declared to celebrate the centennial birth anniversary of the founding leader of Bangladesh, Bangobondhu Sheikh Mujibur Rahman.

The Government of Bangladesh has declared the year 2020-21 as Mujib Year starting from March 2020 until December 2021.

This new zinc rice variety has zinc content of 25.6 milligrams per kilogram rice. The rice is slender and non-sticky when cooked, in comparison to previous zinc rice varieties. The average yield is 7.7 metric tons per hectare after trials were conducted in 10 locations across the country.

The life span of this variety is 148 days and is approved for cultivation in boro season, which is the dry season for irrigated rice crop planted from December to early February and harvested between April and June.

He added: “Our plan is to make this variety popular with the farmers very soon to increase production on the one hand and provide nutrition on the other.”

Agriculture Secretary Mesbahul Islam, president of the National Seed Board, said: “Hopefully, it will be a popular variety. Most of the calories, proteins, and minerals in the diet of the poor people of the country come from rice. Rice is easily available to them.”

Harvestplus will be conducting demonstration and awareness-creation activities for farmers for this variety and ultimately promote it for commercialization.

Zinc deficiency contributes to stunting and a loss of appetite, lowers immunity, and increases the risk of diarrheal disease and respiratory infections. About 36 percent of children under five in Bangladesh do not get enough zinc in their diet.

According to the World Bank, Bangladesh loses over USD 700 million annually in GDP to the human and productivity impacts of vitamin and mineral deficiencies.

HarvestPlus improves nutrition and public health in Bangladesh by promoting biofortified rice that can provide more zinc in the diet. HarvestPlus has been working with the BRRI and the International Rice Research Institute (IRRI) to develop zinc rice since 2004.

In 2013, BRRI succeeded in developing and releasing the first biofortified zinc rice variety in the world, BRRI dhan62, through HarvestPlus support.

HarvestPlus has been working on the promotion and distribution of zinc rice, reaching more than 24,54,000 Bangladeshi households directly since 2013 through its core program and three main projects: the Enhancing Nutrition Services to Improve Maternal & Child Health (ENRICH) Project (2016-2020); the Bangladesh Initiative to Enhance Nutrition Security and Governance (BIeNGS) Project (2018-2022); and the Commercialisation of Biofortified Crops (CBC) Program (2019-2022).

*CGIAR is a global agriculture research partnership for a food secure future. Its science is carried out by its 15 research centers in collaboration with hundreds of partner organizations