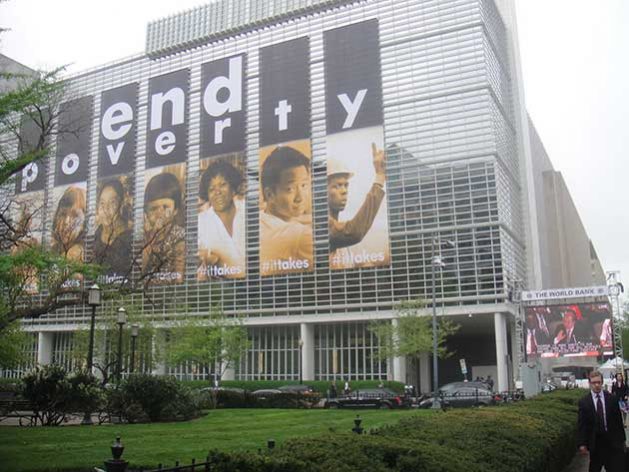 The World Bank, an organization that aims to end poverty, hosts the International Centre for Settlement of Investment Disputes (ICSID) where corporations are suing Argentina and Bolivia over pensions.

NEW YORK, Mar 29 2021 (IPS) - Nobel Laureate Joseph Stiglitz, Juan Somavia, Jeffrey Sachs, Jose Antonio Ocampo and more than 100 high-level development experts have issued a statement protesting insurance corporations suing Argentina and Bolivia over the reversal of their failed pension privatizations at closed sessions of the International Centre for Settlement of Investment Disputes (ICSID) of the World Bank. If Argentina and Bolivia lose the disputes, it means that impoverished citizens and elderly pensioners will have to compensate wealthy financial corporations. Read their letter:

“We the undersigned —economists, social security and development experts— strongly condemn and oppose the cases:

Private insurance corporations are suing Argentina and Bolivia for loss of potential profits as a result of the reversal of privatization of pension programs.

Financial corporations started administering the pensions of Argentinians in 1993 and of Bolivians in 1996. Argentina and Bolivia are among only 30 countries (of the world’s 192) that experimented with privatization of their pension systems. Today, the majority of these countries are reversing the privatization of pensions. In accordance, the Government of Argentina returned to a public pension system in 2008 and Bolivia in 2009.

It is the duty of the governments of Argentina and Bolivia to best ensure the welfare of their citizens. In 2008-09, this involved reinstating a public pension system. They did not act alone; other governments also reversed pension privatization because of demonstrated inadequacies/failures in the private pension system:

The governments of Argentina and Bolivia took legitimate decisions in the interest of their citizens that must be respected, as part of a country’s sovereignty. It is reprehensible that investment treaty arbitration allows corporations to initiate dispute settlements against governments —and ultimately people— in order to continue profiting.

We also oppose the lack of transparency of the process at the World Bank’s International Centre for Settlement of Investment Disputes (ICSID). While corporations may argue that procedural protections are needed, these cases affect the lives of millions of Argentinians and Bolivians. They must be open and transparent.

If Argentina and Bolivia lose the disputes, it means that their citizens —ordinary people who have had to suffer low pensions because of the privatization— will now have to pay millions of dollars to wealthy financial corporations.

These legal cases should serve as a warning for the majority of countries of the world that have not privatized mandatory pensions but may have pressures to do so: On top of suffering lower pensions, more old-age poverty, and high fiscal costs, you may be sued by the private insurance administrators. We hope that other countries are dissuaded from pension privatization by this corporate attack on government’s right to set policy to promote the welfare of their citizens, an attack made in pursuit of profit and at the expense of impoverished citizens and elderly pensioners.

1 In Argentina, coverage rates for men fell from 46% (in 1993, prior to the reform) to 35% (in 2002) and for women to only 31%; in Bolivia, they stagnated.
2 In Bolivia, after privatization, the replacement rate fell to 20% of the average salary during working life; this is far below ILO international standards.
3 In Bolivia, the proportion of elderly women receiving a contributory pension fell from 23.7% in 1995 to 12.8% in 2007 as a result of privatization.
4 In Argentina, initial estimations put the cost at 0.2% of GDP; later the World Bank increased the cost estimate to 3.6% of GDP, 18 times the original estimate; in Bolivia, the actual transition costs of the reform were 2.5 times the initial projections.
5 In Argentina, administration costs jumped from 6.6% of contributions in 1990 before privatization to 50.8% in 2002; in Bolivia, from 8.6% in 1992 to 18.1% in 2002 after privatization.

This letter has been signed by more than 100 high-level economists and social security/development experts. See the full list of signatories here.