The writer is the Founder and Executive Director of Climate Refugees, a human rights NGO that calls for the protection and rights of those displaced by climate change. 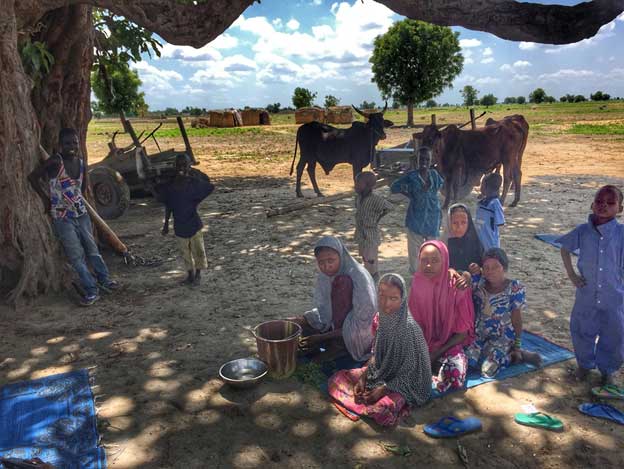 NEW YORK, Apr 22 2021 (IPS) - Today marks Earth Day and all around the globe, advocates and activists, concerned citizens and the like will gather to raise awareness about the climate crisis.

World leaders will be among them, notably U.S. President Joe Biden speaking as his administration kicks off its Leaders Summit on Climate, while a growing number of migrants and asylum-seekers at the U.S. southern border, a vast majority from Central America fleeing compounding crises, continue to have their rights and protection needs unmet.

Today, my organization Climate Refugees will also gather in an Earth Day event, Frontlines: Climate Risks & Migration with US Congressman Joaquin Castro of Texas, and longstanding activists and advocates in immigrant and migrant rights, climate policy, and environmental justice working with frontline communities.

We will look for a reflective conversation on Central American migration to discuss solutions, and what can be done by the Biden administration and the international community to protect the world’s most vulnerable, ahead of climate negotiations at COP26 in Glasgow.

As we shared in a recent report, in response to President Biden’s executive order to better understand the impacts of climate change on migration, a deeper review of Central American migration will reflect the interconnections between climate change impacts, the killing of environmental leaders, historic oppression of Indigenous Peoples, the ways in which people are losing access and being moved off their lands, specific industries, and direct or indirect drivers of conflict and violence by gangs.

This is no different to the all-too familiar situations observed in traditional refugee contexts where conflict generally exacerbates underlying poverty, exclusion and marginalization of certain populations that force individuals to flee.

Eastern and southern African nations have faced an increase in floods, droughts and other climate-related events over recent years. The UN says a new bond with nature is the goal of UN’s annual Earth Day celebrations on April 22. Credit: UNDP/Arjen van de Merwe

The Dry Corridor covers nearly 30 percent of the entirety of Central America, home also to the greatest population density where a number of Indigenous groups reside, and where rural poverty rates are higher than the national averages, and food insecurity has soared.

This region is home to another type of convergence as well: extreme climatic events like the recent hurricanes Eta and Iota, tropical storms and drought, which render social, economic, environmental and political vulnerability on the region, its people, and ultimately, its national economies.

Several migrants we’ve spoken to have included sustained climate changes amongst the reasons for their displacement, and the resulting challenges when crop failures equal sustained losses and adaptation is hindered by ever smaller plots of land.

As much as we know about ‘climate migration’, we still know very little. What we know is that every situation will look different, largely because there is no single driver for movement that can be singularly attributed to ‘climate change.’ Instead, climate change is exacerbating underlying tensions and contributing to social disruptions.

Even in situations of disasters, we can move people out of harm’s way in order to save lives, but it’s their protection needs to the increased frequencies of disasters, as well as before, during and after a disaster that requires cohesive global action.

The Biden administration must realize these changed dynamics in policies both at home and abroad. To do so is to understand that many migrants fleeing Central America’s Dry Corridor are likely both asylum-seekers as defined by international refugee law, as well as individuals displaced by climate change, a category not protected in that area of law.

Central America’s poorest, marginalized and Indigenous are emblematic of a global phenomenon that climate change presents: the intersection of climate change and race.

The climate crisis disproportionately impacts marginalized populations, many of whom may be displaced or forced to migrate because of years of unequal access to opportunities and gaps in human rights, a topic my organization delved into with human rights and environmental justice experts in this event.

Philip Alston, the UN Special Rapporteur on Extreme Poverty and Human Rights’ report on Climate Change and Poverty, revealed developing countries will bear 75 to 80 percent of the financial costs and losses associated with the climate crisis, despite contributing only 10 percent of carbon dioxide emissions, creating a situation in which those in extreme poverty now also live in extreme weather.

He warned of increasing divisions as well, the risk of a ‘climate apartheid’, where the wealthy escape the negative impacts of climate change, leaving impacts to be borne by disproportionate groups ostracized by divisions, including race.

In the U.S., people of color are far more likely to live near pollutants, Black communities face higher risks from air pollution, and Black mothers are most affected by pregnancy risks associated with climate change, linking race, even more than poverty, to environmental pollutants, something long stated by environmental justice and Indigenous rights activists who articulated the systemic nature of environmental racism.

Those same activists were instrumental in bringing to light the interconnectedness of social, economic and environmental factors to the international stage at the 1992 Earth Summit in Rio de Janeiro, Brazil, which helped to form the United Nations Framework Convention on Climate Change (UNFCCC).

This November, as world leaders gather at yet another UNFCCC Conference of the Parties – COP 26 – in Glasgow, Scotland, world leaders will likely gather to tell us “climate change affects us all”, and risk forgetting, “but not equally.”

They may speak of solutions that provide “dignity” for the world’s impacted, as if dignity were something they never had. They might project images of war-ravaged refugees, as if this is an accurate depiction of the intersection of climate and displacement, failing completely to understand the impacts of climate on entire societies.

They may speak of climate risk populations as poor and destitute, when in fact poor is relative and those with options are exhausted, rapidly running out of fight and solutions.

The poor, the vulnerable, the marginalized are actually the one’s systematically left behind, the oppressed and the disenfranchised.

As the emissions continue to go unchecked, the planet warms and impacts disproportionately punish these groups of people, they know and we know we can no longer be expected to wait for the world’s leaders to get this right.

*Amali Tower previously worked for the UN High Commissioner for Refugees and various NGOs in the humanitarian sector, including the US Refugee Admissions Program administered by the US Department of State’s Bureau of Population, Refugees, and Migration.