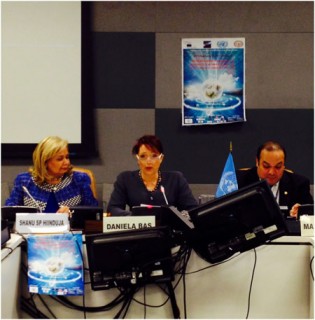 New Technologies: A Key Driver of Development for All

By Jean-Baptiste Viallet
In a report released here, the U.N. Commission for Social Development (UNCSD) stressed that information and communications technologies (ICT) can contribute to people’s empowerment and serve as a crucial means of expanding access to information and opportunities.

By Jean-Baptiste Viallet
The Food and Agriculture Organisation (FAO) has estimated that illegal, unreported and unregulated fishing costs about 20 billion dollars annually.

By Jean-Baptiste Viallet
The United Nations Wednesday marked the first anniversary of the adoption of the Arms Trade Treaty (ATT). Nine months after the treaty was opened for signature, a group of 18 countries have jointly deposited their instruments of ratification.

“The Marches For Freedom” – An American perspective of French multiculturalism

By Jean-Baptiste Viallet
The issue of racism was the underlying theme of a new documentary screened at the French-American Foundation Monday.

By Jean-Baptiste Viallet
A new report launched Tuesday in Stockholm by the UN Educational, Scientific and Cultural Organisation (UNESCO) raises the issue of the opportunities that new technologies have opened up, and focuses on recent progress towards media freedom.

WHO Reports Seven Million Deaths Annually due to Air Pollution

By Jean-Baptiste Viallet
In new estimates released Monday, the World Health Organisation (WHO) reports that around seven million people died prematurely in 2012 as a result of air pollution exposure. The figures confirm it is one of the world’s largest single environmental health risks.

By Jean-Baptiste Viallet
“We live in a multicultural world. The language we speak affects both the way we think and act,“ said Under-Secretary-General Peter Launsky-Tieffenthal, the UN Coordinator for Multilingualism, at a roundtable discussion on the occasion of the International Francophonie Day on Thursday.

Justice for ‘Women by Women’ in Afghanistan

By Jean-Baptiste Viallet
“Progress for women is progress for all,” said Irene Khan, director-general of the International Development Law Organization (IDLO), at a roundtable discussion Monday on the sidelines of the two weeklong session of the Commission on the Status of Women (CSW)

By Jean-Baptiste Viallet
“New technologies can be powerful multipliers for human rights and empowerment; but this doesn’t happen by itself. It requires strong frameworks and policies,“ said Irina Bokova, Director-General of the UN Educational Scientific and Cultural Organization (UNESCO).
ADVERTISEMENT ADVERTISEMENT