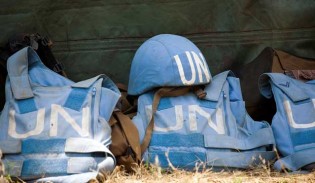 By Riccardo Petrella
The holding of this Special Session (the 37th in the history of the UN) is of considerable importance. It is a unique opportunity to define and implement joint actions at the global level to fight the pandemic in order to ensure the right to life and health for all the inhabitants of the Earth. As the President of the UN General Assembly wrote in his letter of convocation: "Let us not forget that none of us are safe until we are all safe".

A WAR ON POVERTY OR A WAR ON THE POOR?

By Riccardo Petrella
The latest Human Development Report 2007/2008 of the UNDP on climate change forecasts that in less than 20 years, 2.4 billion human beings will live in shanty towns and poor suburbs that lack water and sanitation and suffer high rates of infant mortality, writes Riccardo Petrella, founder of the International Committee for a World Water Contract, is professor emeritus at the Catholic University of Louvain. In this article for IPS, Petrella writes that the world\'s major political challenge for the next thirty years and beyond is guaranteeing the right to a human life for all: in other words, the complete eradication of poverty from the world, and more precisely, the elimination of those approaches and processes which have led to the mass pauperisation of the world\'s populations. The solution involves a total and radical redefinition of the future of cities in which cities have to be given back to citizens. The author calls shifting the investment and use of local and global resources towards the generation of collective wealth in poor suburbs, namely the production of communal goods: water, health, education, housing, agriculture for local needs, renewable energies, energy saving, etc. This will involve a battle for the global restructuring of the current financial system, whose latest, umpteenth crisis proves such change is absolutely necessary.

By Riccardo Petrella
It is well known that even in countries where mineral water is public property, it is private companies that are making major and easy profits from selling it, writes Riccardo Petrella, founder member and General Secretary President of the International Committee for the World Water Contract, and professor at the Catholic University of Louvain. In this article, the author writes that the \'\'business\' of bottled mineral water has become one of the most lucrative and fast-growing sectors around the world. The Swiss private bank Pictet forecasts that by 2015 private companies will supply water to almost 1.75 billion \'\'consumers\'\'. In this context, it is not surprising to learn that water management companies are among the most hotly bought and sold businesses, much the way shoes or refrigerators are. The last major instance of this was the sale of of Thames Water, which in fifteen years passed from being a public entity to a private British company to a holding of a German energy giant and now of an Australian bank. It should not be excluded that in ten more years Thames Water could pass into the hands of a Chinese company specialising in urban waste removal.

By Riccardo Petrella
Yet again the economic and political forces that control the World Water Forum (WWF) have succeeded in blocking the principle of access to drinking water as a human right (universal, indivisible, indefeasible) from being recognised in the final ministerial declaration of the Fourth WWF held in Mexico City from 16-22 March, writes Riccardo Petrella, Secretary-General of the International Committee for the World Water Contract. In this article, Petrella writes that the rejection confirms that the World Water Council, organiser the tri-annual WWF, is but the emanation of a world water oligarchy at the beck and call of the French water lobby, which is comprised of the two largest water multinationals, the French government, and the World Bank. Now that the wind has begun to blow less uniquely in favour of the privatisation of water, the liberalisation of water services, and the privatisation of the common good, it is time that the principle of the right to life for all people as the foundation of social justice and of a true democracy become the rallying call of a new world water politics. It is time to take back from the market and finance the power to govern the destiny of human society.

By Riccardo Petrella
On March 22, World Water Day, the UN will launch the second International Decade for Action \"Water for Life\" (2005-2015), writes Riccardo Petrella, a professor at the Catholic University of Louvain. In this article, Petrella writes that the goal of first decade (1981-1991) was to assure access to potable water to all inhabitants of the planet by 2000. As we know, this goal was not achieved - far from it. This failure was due primarily to the fact that the leaders of the rich and powerful countries did not implement the measures that they themselves considered essential, particularly allocating 0.7 percent of GDP per year for aid to underdeveloped countries. Instead, between 1975-2000, they provided on average 0.23 percent, or less than a third of what they had promised. With the ascendance of the vision of today\'s financial globalisation, the eradication of poverty came to be considered impossible. Were it to happen, it would be achieved not through public will but by market mechanisms. Creativity, life, identity, and even individual survival are all vetted in the arenas of the global competitive markets, whose specific function is to select the \"best\" products and services, the more \"profitable\" places for investment, production, and consumption, promising the most \"competitive\" success. The fundamental question, Petrella writes, is whether the right to life of billions of human beings can be squared with the prolongation of the present human disaster by another ten years. I do not believe that the majority of Europeans, Africans, Asians, and North and South Americans think so.
ADVERTISEMENT ADVERTISEMENT