TORONTO, Jun 28 2008 (IPS) - Residents and activists from the central Mexican state of San Luis Potosí travelled to Toronto to tell the shareholders of a Canadian mining company that their investments are at risk because the billion-dollar Cerro San Pedro gold and silver mine is illegal and environmentally unsafe. 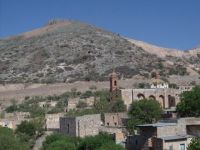 The trip ended Jun. 17 with delegation member Armando Barreiro, a national lawmaker, being roughed up by Toronto police after he had made his presentation before the annual shareholders meeting of Metallica Resources Inc., owner of the open pit mine.

Barreiro, of the leftist Democratic Revolutionary Party (PRD), had stated that the Mexican Congress was about to pass a bill aimed at closing down the mining project and that a Mexican member of the board of Metallica Resources was under criminal investigation.

“This was an aggression and a lack of respect to someone who immediately identified himself as a representative of the Mexican people,” Barreiro told Tierramérica. “This aggression is in deep contrast with the peaceful and respectful attitude with which we conducted ourselves.”

The police also restrained and removed Juan Carlos Ruiz, a history professor at the Colegio de San Luis, who was part of the delegation organised by Frente Amplio Opositor, an anti-mining group.

“We want the Canadian people to be aware their investments have serious environmental and social damages in other countries,” Ruiz had told Tierramérica earlier through a translator. “The mining is right next to monuments of national importance.”

“A historic church has several large cracks because of the dynamite explosions from the pit,” he said.

The village of Cerro San Pedro, some 400 kilometres north of Mexico City, is right in the middle of the 18-month-old San Xavier mining operation, a subsidiary of Metallica.

Some 150 people live in the 400-year-old village, and roughly 20,000 in the surrounding towns, in a region where mining for gold and silver has long been a fixture.

The local people are not opposed to underground or shaft mining, as has been done for hundreds of years. What they overwhelmingly oppose is a huge open pit mine with millions of tonnes of ore being treated in the open with large amounts of cyanide.

On its web site, the company displays another poll, conducted by Epiica and published in March 2007, in which 55 percent of those interviewed who said they knew about the project said they agreed with it, 31.3 percent said they disagreed, and 13.7 percent were undecided.

One of the biggest concerns is water. The region is semi-arid and water is in short supply, but a series of underground aquifers provide water for local residents and the state capital San Luis Potosí, a city of one million located less than 20 km from the mine site.

Not only does the mine require an estimated 32 million litres of water per day, there are serious concerns that the cyanide will contaminate the aquifers, says hydrologist Mario Martínez, resident of Cerro de San Pedro.

“There are cyanide heap leach pads (large pools) right on top of an aquifer,” Martínez told Tierramérica through a translator.

Once the ore is removed from the Cerro de San Pedro pit, it is trucked two km to specially prepared outdoor pads, where a solution of water and cyanide is sprayed on the ore to dissolve the gold and silver out of the rock.

The water is treated to remove the precious metals and recover some of the cyanide. The “spent ore” is removed and piled into hills that Martínez says are already more than 20 metres high thanks to a daily deposit of 32,000 tonnes.

“Sixteen tonnes of sodium cyanide are being used daily, and there is a great risk it could seep into the aquifer,” he said.

The mining company assures that the cyanide is managed in a closed circuit and that the surface of the leaching pools are covered by special plastic membranes, injected with air and monitored by leak detectors.

The local residents also worry that the cyanide-saturated mountains of spent ore could pollute surface water after rains. Cyanide is very toxic to fish and other water species.

Not surprisingly, the mine has been the centre of controversy for many years. Ten court injunctions have been obtained to stop the project over the past six years, according to Ruiz. “Federal and state officials are not applying the law,” he said.

Although a local court cancelled the mine’s operating permits, the federal government re-authorised the project, observing several aspects of the environmental impact study.

Subsequent rulings were downplayed by federal officials, who argued that municipal agencies did not have the authority to approve or reject this type of project.

But the Frente Amplio Opositor maintains that, according to environmental law, the company cannot operate without municipal authorisation. “We want government officials to respect the rule of law. This mine should not be in operation,” said Ruiz.

Metallica is a small gold and silver mining company, headquartered in Toronto. Involved in exploration in Chile and Alaska, Cerro San Pedro is its only mine in production.

A wholly-owned Mexican subsidiary, Minera San Xavier, operates the mine and Metallica projects that it will extract an estimated 1.5 million ounces of gold and 62.1 million ounces of silver over the next eight to 10 years.

Tierramérica contacted Metallica for an interview but received a negative response by email: “Today was an Annual General Meeting where we approved a merger with Peak Gold and New Gold. We are currently in a PR (public relations) blackout. Feel free to contact me after June 30,” signed by Rhonda Bennetto, director of investor relations and corporate communications.

“Cyanide heap leach mines have a chequered environmental record around the world,” says Payal Sampat of the U.S.-based environmental group Earthworks, which in 2004, in cooperation with Oxfam, launched the “No Dirty Gold” campaign in an effort to get the industry to improve its mining practices.

Thirty leading jewellery companies agreed to buy only gold from companies that follow the “golden rules” of responsible human rights and environmental standards.

The rules do not exclude heap leach operations, which comprise the majority of large gold mine operations. They do oppose locating such mines near fragile ecosystems and require that companies obtain informed consent of affected communities.

According to Barreiro, more than 200 legislative deputies and 57 senators in the Mexican Congress have signed a bill to close the Cerro de San Pedro mine and require Metallica to pay for environmental damages. The bill will be debated in the next session. In April, a similar bill did not win the necessary votes.

“The mine will be permanently closed this year,” said Ruiz. “The investors should be aware of this.”