PAMIR MOUNTAINS, Tajikistan, Aug 27 2009 (IPS) - The collapse of the Soviet Union has brought misery to Tajikistan’s remote eastern half. People are being driven once again to live as nomads. 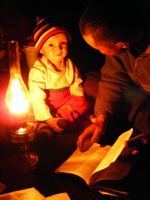 The country of seven million went from being the poorest Soviet republic to being one of the world’s poorest nations. Independence brought the end of state farms, mines, irrigation channels, transport networks and energy plants.

Some Western analysts celebrate the locals’ return to “ancestral traditions”, but many adapting to the realities of the free market see it quite differently.

“I wouldn’t be here if I didn’t have to,” says Timurbek, formerly a Russian philologist and now a pensioner who has taken to animal husbandry. “Before, nomadism was a matter of choice, now it’s one of necessity,” he told IPS.

Timurbek set up his yurt, a big tent made of wool and with an interior richly decorated with wall coverings, horse bags and carpets, on one of the few grassy fields left on the Pamir’s high plateaus, at an altitude of 4,100 metres.

The Pamirs lie mostly in the Gorno Badakhsan province. The province is home to a mere 3 percent of Tajikistan’s population – little more than 210,000 – but which constitutes almost half the country’s territory.

The Pamirs are among the highest mountain ranges in the world, with altitudes ranging from 3,000 to 7,500 metres. Extreme climatic conditions make this one of the least densely populated areas on the planet.

The 13th century traveller Marco Polo described the region as “nothing but a desert without habitations or any green thing,” so cold that “you cannot even see any birds flying.”

Known since the 19th century as the “Roof of the World”, the Pamir mountains have for centuries been crossed by traders using the Silk Road, and later by spies involved in the 19th century geopolitical duel between the Russian and British empires.

Currently the only road through the mountains is the Pamir highway, the second highest in the world, built by the Soviet military in the early 1930s.

The road is now in precarious shape and mostly serves as an opium and heroin trafficking route from Afghanistan northwards. Some call this section of the former Silk Road the “opium highway”.

“Under the Soviets we had all sorts of food in the shops, cheap fuel, buses and roads in good shape,” says Aziz, a semi-nomadic farmer at the yurt camp, as his wife quietly runs a rudimentary machine producing butter and yoghurt from Yak milk.

“It doesn’t mean we liked Stalin, but everyone here misses the Soviet Union,” Aziz, a Kyrgyz of Sunni Muslim confession told IPS. “We couldn’t practice our religion freely, but there was food and work.”

Besides the Tajiks, who are close to Iranians and constitute 80 percent of Tajikistan’s population, the country is inhabited by Pamiris, who, like the Tajiks speak several languages related to Persian, and the Kyrgyz, who settled here in the 18th and 19th centuries and speak a Turkic language.

Locals survive on selling livestock and dairy products, growing vegetables in small kitchen gardens, and on humanitarian assistance, which during the civil war saved the region from an impending famine due to the economic blockade.

Feeling unrepresented in government, Pamiris from the Gorno-Badakhshan declared independence from Tajikistan in 1992, sparking a civil war that claimed up to 100,000 lives, and ended only in 1997.

Since then there has been little compassion from the central government, even though the vast majority of people in the Pamirs live on about a dollar a day.

The nomadic lifestyle at the yurt camp can only be maintained in the summer months. In the bitterly cold winter, when temperatures can reach – 50C, Aziz and others are forced back to the nearby town Murgab, the largest settlement in the region with a mere 6,500 inhabitants.

The poverty affects education; some children do not go to school because their parents cannot afford school material and uniforms.

Fuel is scarce, and locals are forced to use the scarcely available tersken bush to heat households, leading to desertification.

In spite of the potential for hydro energy, investors consider the region risky because consumers are unable to pay for electricity. Some organisations are now trying to promote use of solar energy, efficient at high altitudes.

Electricity is so scarce that the town is divided into two parts that get it by turns. Some use expensive fuel-run generators.

Many villages that for decades had become used to electricity for heating and cooking now get no supply even in winter. That also makes it impossible to run schools and hospitals in some of these forgotten corners of the former Soviet Union.