DETROIT, Jun 24 2010 (IPS) - The U.S. labour movement needs to be reorganised from the bottom up to include domestic workers, day labourers, restaurant workers, taxi drivers, farm workers, incarcerated workers, guest workers and those in the “right to work” states. 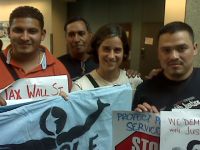 That is the message the Excluded Workers Congress, a coalition of labour groups, brought to the U.S. Social Forum in Detroit this week. In addition to state-by-state advocacy, they are pressing hard for reforms at the federal level, particularly to the National Labour Relations Act.

The coalition held a fierce discussion at the Social Forum about the need for reform and how workers who are not part of the federally recognised labour movement in the country are being denied decent wages and benefits.

“We need to protect all workers under labour law. I think this is a historic demand because it’s about time the public recognises that you can’t respect some workers and deny others,” said Camilo Viveiros, director of Jobs with Justice based in Rhode Island. Guided by the mantra “We need a domestic bill of rights,” labour activists say they want to break down the legislative barriers that have made it difficult for some sectors of the workforce to effectively demand equal protections.

“There are labour laws that need to be reformed for all of labour,” Viveiros said.

Last year, as part of the Inter Alliance Dialogue (IAD), representatives from the National Day Labourer Organising Network (NDLON) and the National Domestic Workers Alliance (NDWA) met with Jared Bernstein of the White House Task Force on the Middle Class. At the meeting, Bernstein showed interest in the possibility of organising a White House briefing on “excluded workers” or those excluded from the right to organise, participants said.

Engaging the administration of President Barack Obama on such an issue is key for the coalition.

Randy Jackson, president of IAD, said it is important to bring these issues to the Social Forum because different sectors of excluded workers face many common challenges.

“Labour exclusion has its roots in slavery. Therefore it is a moral, economic and racial justice obligation for us to break the chain of that history and create a framework of organising in which the right to organise is a fundamental right,” Jackson said. In 2008, representatives from six grassroots groups – the Grassroots Global Justice Alliance, Jobs with Justice, the National Day Labourer Organising Network, the National Domestic Workers Alliance, the Pushback Network and the Right to the City Alliance – came together to identify a response to the crisis of excluded workers, Jackson said.

That meeting launched IAD, he said, to ensure that their base constituencies that have been historically marginalised – communities of colour – are united for social change.

Jackson said mainstream labour organisations have either been reluctant or don’t think it is profitable to include excluded workers in their movement.

But there is some legislative action already taking place in Albany, New York where the State Senate passed a bill that would require paid holidays, sick days and vacation time for domestic workers. They will also be able to get overtime pay.

Under the legislation, a domestic worker is entitled to 14 days notice or termination pay before they can be fired.

The State Assembly passed similar legislation last year which, when signed by Gov. David Patterson, will be the first such protection for domestic workers in the U.S.

Mackenzie Baris, an organiser with Jobs with Justice in Washington DC, said, “It is really exciting to have so many different workers all talking about their concerns and struggles. This is an opportunity for the movement to come together and have greater collaboration.”

Jaribu Hill from the Mississippi Workers Centre for Human Rights said of the campaign to get recognition for excluded workers, “I think we are off to a good start. We just need more representation from workers of African descent.”

Guillermina Castellanos, who sits on the steering committee of the International Domestic Workers Network, said it is time for excluded workers to be heard.

“We have been in the shadows for a long time. We have faced sexual, verbal and all kinds of abuses,” Castellanos said. “We need to recognise that domestic work is decent work but it has never been valued since slavery.”

With an estimated 2.5 million women labouring as domestic workers in the U.S., serving as nannies, housekeepers, and caregivers for senior citizens, Castellanos said it is time for the federal government to address their concerns.

She said the goal of coming to the forum is to unite and organise to win.

“There is a lot of energy at the U.S. Social Forum,” Castellanos said. “It is important that we are here in order to end the slavery.”

A new report “Organising with Love: Lessons from the New York Domestic Workers Bill of Rights Campaign”, talks about the collaboration between excluded workers and organised labour.

In the report, John Sweeney, president of the powerful AFL- CIO trade union, speaking at a Domestic Workers United town hall meeting, revealed that his mother had been a domestic worker for more than 40 years and pledged to support a domestic workers rights bill as the son of an immigrant domestic worker.

The report credited the passing of protections for domestic workers to a Democratic administration in Albany, which is raising hopes for millions across the country that the Obama administration will answer to their 3 a.m. call for fairness and equity in the workplace.