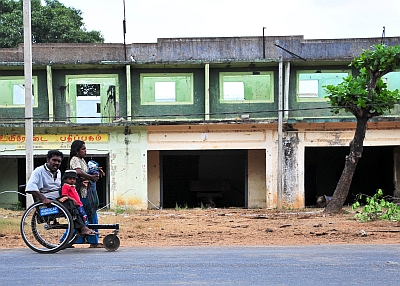 NEDUNKERNI, Sri Lanka, Nov 28 2011 (IPS) - The rough road is almost indistinguishable from the mud huts and dilapidated surroundings of this village – still pockmarked by the artillery duels of Sri Lanka’s fierce civil war that ended more than two years ago.

Chinese engineers are now overseeing the repair of this 50 km stretch of gravel connecting Nedunkerni village with the A9 highway, the lifeline for Sri Lanka’s former northern war zone, popularly known as the Vanni.

Culverts and small bridges are being restored and sharp turns realigned. Restoration of the Nedunkerni – Puliyankulam road is a sign that basic public amenities like transport are no longer luxuries and that almost two and a half years after the war ended peace and development are finally trickling in.

Kanagasabay Udayakumar, stares at the road from the building housing the Vavuniya North Multi-purpose Co-operative Society (MPCS) office wondering when the road will finally become serviceable again and allow vehicles to roll in with goods. “The day the road is okay, we are okay,” Udayakumar, general manager of the MPCS, tells IPS.

Nedunkerni is typical of the interior villages in the Vanni. It escaped the brunt of the last bout of fighting – mainly because its population fled en masse.

Yet, every wall left standing in the village bears bullet marks. The room that Udayakumar uses as an office is large, has a large hole in the roof through which sunlight streaks in. “Probably a shell,” explains Udayakumar.

A picture of Sri Lankan president Mahinda Rajapaksa, credited with militarily defeating separatist militancy on the islands, adorns one wall of the room as if to guarantee rapid resettlement in the Vanni.

Since December 2009, there has been resettlement in the Vanni and Nedunkerni village is no exception.

According to the United Nations over 3,700 families have settled in the Vavuniya north division of which Nedunkerni is the largest village.

Since most of the families have turned to agriculture and cottage industries for their livelihood, the restoration of the road is vital as it provides the shortest link to Vavuniya – the economic nerve centre of the region.

This year, for the first time in decades, the division recorded a bumper paddy harvest and the possibility of good prices, especially after floods had wiped out about 20 percent of the harvest on the island.

But the final price for paddy in Nedunkerni was even lower than the minimum price set by the government because of the poor condition of the road.

Farmers could not afford the high prices quoted by transporters loath to take the road. With storage facilities non-existent, the famers were at the mercy of buyers from nearby towns like Vavuniya and Kilinochchi who knew they could make a killing.

The same logic works for vegetables, dairy and poultry products – sometimes on harsher terms because of their perishable nature. Udayakumar says a loaded truck will take over three hours to get to the wholesale market in Vavuniya. “Seven hours or more on the road is not worth the effort for most,” he said.

When the village recorded a particularly good harvest of aubergines, the traders waited till prices fell to a fraction of the Rs 70 (80 cents) per kg, the wholesale price in Vavuniya town.

No one grows aubergines or other vegetables anymore unless the traders offer them set prices in advance.

“It is sad, because this is fertile land, anything will grow here,” says Kiruja Sivasubramaniyam a local worker with a United Nations agency who uses the road frequently.

Vimala Devi a widow with two children has given up taking concuts to a nearby town to be sold. “I am scared to leave my children alone at home for long periods of time,” she told IPS. She now searches for daily work in the paddy fields.

Even when there are signs of a good harvest like in the last quarter of this year when the rains come, Nedunkerni and the surrounding villages will suffer.

The latest UN situation report said that the onset of the rains was likely to worsen the transport nightmare. The roads are in their best condition during dry spells – but that is when the harvest is small.

There are scores of projects that aim to revitalise the domestic economies of these villages – like the setting up of at rice milling stations and bee-keeping. But none will deliver their full potential until the roads are motorable.

Even children here know that. “When the road is better, we will have a better life,” ten year old Ambikavadhi told IPS. She lost her father as the fighting closed in April 2009 leaving her mother to look after four daughters.

“We can get a good harvest from our garden, but what is the use if we can’t get a reasonable price?” she asks.