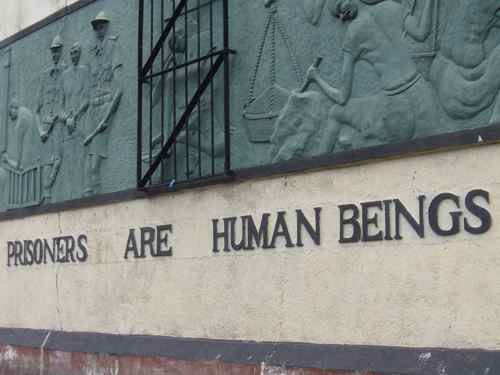 For the first time in Serbian history the issue of abused and incarcerated women is nudging its way into public consciousness. Credit: Ranmali Bandarage/IPS

BELGRADE, Jan 31 2012 (IPS) - The women languishing in Serbia’s Pozarevac Penal Correctional Institution are victims twice over: survivors of decades of domestic violence, they have been imprisoned for killing their partners and often spend up to 15 years in jail.

In a rare example of successful cooperation between non-governmental organisations and the Serbian government, a major effort is currently underway to shed light on this unusual phenomenon and for the first time in Serbian history the issue of abused and incarcerated women is nudging its way into public consciousness.

“There was a general (plan) for improving conditions for women in prison but when we realised that one in 10 of the imprisoned were sentenced for killing their partners after years of family violence, we (decided on) broader action that includes support, education and inclusion programmes once they return to society,” Vesna Nikolic Ristanovic, director at the victimology society of Serbia (SVD), told IPS.

“The women live with the combined traumatic experiences of (domestic) violence and their crime, carry the stigma once they return to society and face the possibility of either becoming victims or perpetrators again,” she added.

A recent survey conducted by the SVD found that over half the women in Serbia experienced some form of family violence last year, while intimate partner violence resulted in the deaths of 44 women during that same time period.

In 2011 16 women – most of them in their 60s and 70s – who had suffered decades of domestic violence were convicted for killing their partners and sent to Pozarevac.

The only facility of its kind for women in Serbia, Pozarevac is named after the town in which it was built in 1874, some 120 kilometres east of Belgrade. It currently houses 769 inmates.

“From Prison to Life without Violence” – a two-year-long joint project undertaken by SVD, the office of the ombudsman, the state secretariat for labour and social policy in charge of gender equality and combating domestic violence and Pozarevac prison administration – has been underway for a year now.

The project aims to educate the judiciary on the impacts of domestic violence and the specific violent responses of abused women, says Milos Jankovic, deputy ombudsman in charge of protecting the rights of imprisoned individuals.

“Punitive policy was practically the only area in which men and women were equal in Serbia,” Jankovic told IPS.

“Women were sentenced to equally grave prison sentences as men, up to 15 years or more in very serious murder cases, regardless of the torture that led women to commit the crime in the first place,” he added.

However, judicial reforms in the past few years and a harsh spotlight on family violence have led to the first ‘lenient’ sentence (of two and half years) for a woman who killed her violent partner. The crime was categorised as ‘manslaughter in an affected state’, where the accused is ruled to have been in a diminished or uncontrollable state of mind at the time of the killing.

For people like Jankovic, who deal with these issues on an almost daily basis, this lenient sentence was a long awaited victory.

The Helsinki Committee for Human Rights in Serbia has undertaken a campaign encouraging judges to give more weight to past abuse as a mitigating factor in pronouncing prison sentences.

It has also launched an action, backed by Serbia’s most prominent female politicians and activists, to help convicts seek pardon or early release.

Serbia is still a traditional, patriarchal society where events that unfold behind closed doors are expected to remain there; family secrets dragged out into the open often spell shame for the families involved.

But the nationally recognised campaign has sparked off a wave of newfound boldness, with scores of women coming forward to tell their stories.

More than 6,500 cases of domestic violence were reported between January and November of 2011.

“The rise of reported cases does not necessary indicate more abuse, but rather a growing awareness amoung people,” said Jasmina Nikolic of SVD’s victims’ office.

“Increased encouragement (from the government and NGOs) to report abuse and ask for protection has added to this,” she told IPS.

Anka Gogic Mitic, a warden at Pozarevac, said that the women serving sentences for murder or other crimes against violent partners come “from all social structures, education levels and financial situations.”

“We try to work on building their capacity and preparing them for social inclusion once they leave,” Gogic Mitic told IPS.

The effort not only provides professional training in bakery, dressmaking or catering but also involves a group of four psychologists and therapists who help women talk through the violence most of them have endured since childhood.

Many live in denial of the grave crime they committed or else are ashamed to face their grown children and families, Gogic Mitic said.

“The issues these women face can only be described as sensitive and complex; no case looks like the other, except on the surface. The hope we have is not to see them at the facility again in the future and we put all our effort into that goal,” she added.