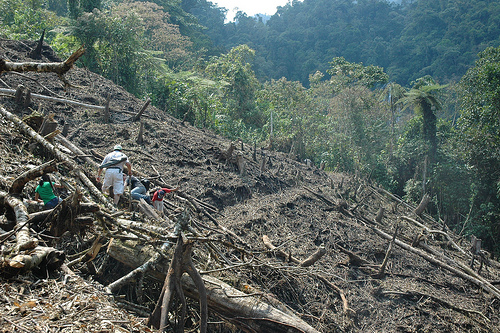 The open wounds of the Amazon. Credit: Rolly Valdivia/IPS

“Exporters in Peru and importers in the United States and around the world are currently integral parts of a systematic flow of illegal timber from the Peruvian Amazon. Sometimes intentionally, sometimes through sheer negligence, each of the actors and agencies involved in this system are working as gears in a well-oiled machine that is ransacking Peru’s forests and undermining the livelihoods and rights of the people that depend on them,” the report stated.

The investigation discovered at least 112 shipments of protected cedar and mahogany were illegally laundered with fabricated papers and imported by U.S. companies between 2008 and 2010. Tracing timber routes from the Amazon to the U.S. warehouses isn’t easy, according to the report, as “links in this chain are willfully obscured to perpetuate confusion about the origins of almost all timber traded in Peru.”

The shipments accounted for more than 35 percent of all trade in these protected species between U.S. and Peru. During this period, Peru’s primary exporter, Maderera Bozovich (whose shipments are received by Alabama-based affiliate Bozovich Timber Products, Inc), exported cargo under 152 protected permits, at least 45 percent of which is believed to include illegally logged wood.

EIA claims the percentage would be actually higher if more on-site supervisions were carried out.

Illegal logging in Peru is facilitated by a widely corrupt system. The timber, often extracted from protected areas including national parks and indigenous territories, are laundered with false information.

Typically, forest owners include “fictitious trees”, trees that don’t actually exist in their logging concessions, in their annual harvest plans to get official permits (called GTS), which are then sold on the black market to be used to launder illegally logged wood. Complicit authorities approve these practices, sometimes financed by “timber barons” connected to organised crime.

In the U.S., the 2008 Lacey Act addresses illegal logging and expects the buyer to practice “due care” and ensure their products are legal. U.S. importers of Peruvian wood continue to show the GTS permit as sufficient proof of legality, despite pervasive corruption being an “open secret” in Peru for years, Andrea Johnson, EIA director of forest campaigns, said.

Bozovich USA told IPS that they are concerned and reject EIA’s accusation. “Bozovich’s exports to USA comply with the terms and condition of Lacey Act and the Convention on International Trade in Endangered Species of Wild Fauna and Flora,” the company said.

Since majority of the trade the report documented occurred after Lacey Act was passed, Johnson believes companies had ample evidence of the risks involving trading timber from Peru.

“It’s been increasingly clear that the standard permit in Peru is insufficient to actually tell you anything about the true origin of your wood in majority of the cases…We believe that in 2012, if companies continue import wood without asking additional questions than ‘Can you give me a document with an official stamp’, this is inadequate due care… a possible Lacey Act violation.”

EIA, which is based in Washington and London, sent out surveys to exporters and importers asking about their due care practices, and none of the U.S. importers wanted to participate, Johnson said. Those who did said they had GTS certificates or claimed to have Forest Stewardship Council certification.

“It’s very important that buyers need to be aware FSC chain of custody certification does not guarantee the company is only selling legally obtained wood,” she said.

“The only thing an FSC certificate will tell you is that the company has the capability to differentiate between FSC certified wood and other types of wood…It appears that some companies use their FSC certificate to suggest that all their wood is coming from a known origin when that is not in fact the case.”

“EIA recorded testimonies from men and women who experienced forced labor and sexual abuse in logging camps, and teenagers with horrific injuries sent away without wages to find their own way to a clinic… Illegal logging is also ransacking the rainforest, harming endangered wildlife, and contributing to climate change. It creates unfair competition, resulting in job cuts and economic losses for law- abiding forest products businesses in Peru, the United States, and other countries around the world,” EIA said in a press release.