WASHINGTON, May 4 2012 (IPS) - A United Nations special envoy on Friday called on the U.S. government to step up efforts to address historical injustices that continue to affect the country’s indigenous population. 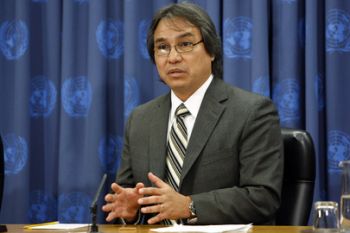 James Anaya, the United Nations Special Rapporteur on the Rights of Indigenous Peoples, warned that historical wrongs, particularly the loss of land, continue to have an overriding impact on the wellbeing of Native American communities.

The trip marked the first time that the U.N. has waded into the contentious issue of U.S. treatment of its indigenous communities, one of the poorest and most marginalised populations in the United States.

The unemployment rate for American Indians has typically been double that of the white population. On reservations – self-governed tracts of land given to Native American communities by the U.S. government – Anaya reported a 70 percent unemployment rate.

Native Americans have also long suffered from disproportionately low statistics in health and education, as well.

But Anaya pointed to an underlying sense of disaffection, as well.

“The sense of loss, alienation and indignity is pervasive throughout (Native American communities),” Anaya stated at the United Nations headquarters in New York.

“It is evident that there have still not been adequate measures of reconciliation to overcome the persistent legacies of the history of oppression, and that there is still much healing that needs to be done.”

Previously, the United States has made clear that it sees such issues as constituting internal affairs. Although Anaya was allowed to complete his research mission, he reported a lingering sense of disconnect with parts of the government.

“I regret that my efforts to meet with members of the U.S. Congress were unsuccessful,” he stated, “especially given the prominent role of Congress in defining the status and rights of indigenous peoples within the United States.”

Such engagement was only made possible in the first place due to a sudden U-turn in U.S. policy announced by President Barack Obama in 2010. At that time, the U.S. formally backed the U.N. Declaration on the Rights of Indigenous Peoples (UNDRIP).

The U.S. was the last country to sign on to the Declaration, which was passed in 2007. The administration of George W. Bush had twice opposed U.S. involvement, including over worries that it would give rise to new legal claims for redress.

Anaya’s trip was aimed at checking into how U.S. commitments towards the UNDRIP have been carried out thus far. He will now be compiling his research into a full report, which is expected to be presented to the U.N. Human Rights Council in September.

If his initial observations are anything to go by, however, the report’s ultimate recommendations to the U.S. government will be based largely on trying to break the negative cycle started by historical wrongs – wrongs that Anaya suggests are directly responsible for the generally dismal condition of Native American communities today.

“Over the past 12 days, I have heard stories that make evident the profound hurt that indigenous peoples continue to feel because of the history of oppression they have faced,” he said in Washington.

Perhaps most critically, that history – “all grounded in racial discrimination” – includes the significant dispossession of lands, including lands that were officially and legally given over to Native American tribes.

As such, several of Anaya’s most significant recommendations will revolve around self-governance and land issues. This includes “some form of land restoration”, the transference of “lost lands” back into Native American hands.

“During my visit, I heard almost universal calls from indigenous nations that the government respect tribal sovereignty, that indigenous peoples’ ability to control their own affairs be strengthened, and that the many existing barriers to the effective exercise of self-determination be removed.”

That contention is backed up by the National Congress of American Indians (NCAI), a pan-tribal association founded in 1944. In a policy paper released in late April, the NCAI stated that land and sovereignty issues are “underlying the state of Native peoples in America today”.

The paper warned that the U.S. government continues to introduce laws “that prohibit tribal communities and tribal members from free use of their land and natural resources”. As recently as Apr. 19, 2012, the paper noted, U.S. officials have cited 1930s legislation “as its authority to regulate Indian land as ‘public land’ without consideration for the unique status of sovereign land.”

For some observers, such a focus on current events – and their future ramifications – makes more sense than dredging up the distant past.

Sher Malik, president of the Indigenous Peoples Survival Foundation, spoke with IPS while preparing to leave for the upcoming seventh session of the U.N. Permanent Forum on Indigenous Issues, starting May 7 in New York.

“We must approach these issues with balance, not focusing on revenge,” Malik says. “Unfortunately, we do not seem to learn from our history. So while I’m against what happened 200 years ago, today I’m not going to dig up negativity for a new generation.”

Yet for Anaya, the issue of negativity goes to the heart of the ongoing marginalisation of the U.S.’s indigenous communities today. Native Americans feel “a systemic lack of respect” and discrimination from the U.S. public and media, he said.

“The broad view in American society seems to be that Native Americans are either gone or, as a group, have become insignificant – and those are simply flat wrong perceptions.”