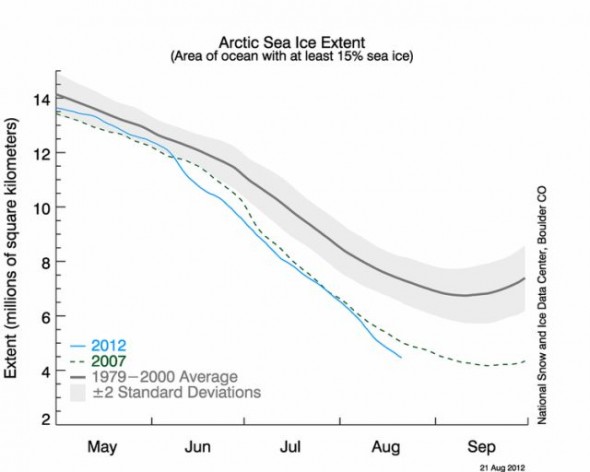 Summer ice this year is half what it was 30 years ago and is now affecting weather patterns. The massive declines in ice in recent summers have shocked scientists and Arctic experts. Some predict that in just a few years we will witness an event that hasn’t happened in millions of years: the complete loss of summer ice.

“We are now in uncharted territory,” said Mark Serreze, director of the National Snow and Ice Data Center (NSIDC) in Colorado.

“Few of us were prepared for how rapidly the changes would actually occur” as a result of the burning fossil fuels that are warming the planet, said Serreze.

“We could see an essentially ice-free Arctic ocean in late summer by the year 2030,” he told IPS.

Not long ago experts thought the soonest the Arctic would be ice-free was 2070. Now it’s anywhere from four to 18 years away.

The impacts are already being felt across the entire northern hemisphere. The loss of sea ice in recent years has been affecting weather patterns, recent research has shown. The all-important jet stream – the west-to-east winds that are the boundary between the cold Arctic and the warm mid-latitudes – is slowing down, moving north and become more erratic.

“Europe, eastern Asia and eastern North America is connected to unique physical processes in the Arctic,” said James Overland of the NOAA/Pacific Marine Environmental Laboratory in the United States.

“In future, cold and snowy winters will be the rule rather than the exception” in these regions, Overland told IPS in Oslo in 2010.

The summer’s record loss of Arctic sea ice may mean a cold winter for the UK and northern Europe, Jennifer Francis, a researcher at Rutgers University, told the Guardian last week.

The region has been prone to bad winters after summers with very low sea ice, such as 2011 and 2007, Francis said.

When continent-sized areas of the Arctic Ocean flip from the all-white ice to dark blue, tremendous amounts of heat are absorbed from the 24-hour summer sun. When the bitter cold Arctic winter sets in over the next few weeks, all the heat in the ocean must be released into the atmosphere before ice can form again.

The Arctic will be ice-covered in winter for decades to come but what’s fundamentally changed is that every fall, unprecedented amounts of heat and water vapour will be released into the atmosphere.

“Arctic sea ice plays a critical role in regulating the planet’s climate. As man-made global warming shrinks the ice, our risk of droughts and other extreme weather goes up. We can’t wait any longer to cut carbon pollution,” Wolf said in a statement.

As the sea ice declines, Arctic temperatures increase, thawing more and more permafrost, which will release more climate-heating carbon and methane. Permafrost is frozen soil, sediment and rock spanning 13 million square kilometres of the land in Alaska, Canada, Siberia and parts of Europe. It has twice the carbon that the atmosphere currently holds.

A Canadian study published last week estimated humanity’s climate heat emissions will thaw enough permafrost to release 70 to 500 billion tonnes of carbon by 2100. The amount of additional heating from these permafrost emissions is estimated to be 0.4C to 0.8C. That’s in addition to the estimated three to four C expected with estimated fossil fuel emissions to 2100 based on current commitment pledges.

It is the first-ever modelling study of this, however, it does not include heating from the massive methane emissions that are also expected. Nor does the study incorporate a model that accounts for the rapid melt of sea ice in recent years, said Andrew MacDougall, a University of Victoria, British Columbia researcher.

“In that respect our study underestimates the amount of potential warming,” MacDougall told IPS.

A global average temperature rise of two degrees C means four to six C in the Arctic, enough to melt much of the permafrost. Preventing this requires putting a high price on the carbon, says activist and writer Bill McKibben.

Oil giant Exxon and the rest of the industry derive much of their enormous profits by using the atmosphere as a garbage dump for the climate-damaging carbon they dig out of the ground, he said.

One way to price carbon is through a “fee-and-dividend” scheme would put a hefty tax on coal and gas and oil, then simply divide up the proceeds to people based on their income to help offset the increased costs. “By switching to cleaner energy sources, most people would actually come out ahead,” writes McKibben.

Carbon pricing has to happen in the U.S. and that means breaking the fossil fuel industry’s hold on Washington’s politicians, he said.