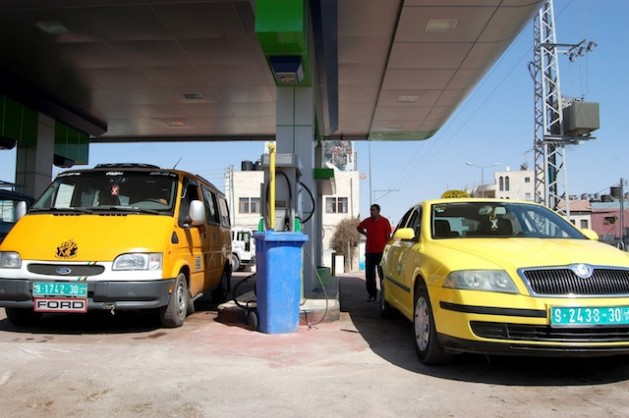 The cost of fuel has made the taxi business almost unsustainable. Credit: Jillian Kestler-D’Amours/IPS.

BETHLEHEM, Occupied West Bank, Sep 12 2012 (IPS) - Thousands of Palestinians took to the streets across the West Bank over the past week in protest against increasingly high living costs, and demanding major changes from the Palestinian Authority (PA) leadership.

“The big problem is diesel,” said Ashraf, a 28-year-old graduate of the economics department at Bethlehem University, who only gave IPS his first name. Sitting in the centre of Bethlehem, Ashraf explained that he began working as a taxi driver four years ago to support his mother and unemployed younger brother after his father passed away.

Today, nearly half his salary goes to paying for fuel. That, in addition to rising food prices, has made making ends meet nearly impossible. A 25-kilogram bag of rice cost 70 NIS (17 dollars) a year and a half ago; today it costs 110 NIS (28 dollars), Ashraf said.

“If I want to make 100 NIS, sometimes I have to work 20 hours in the day,” he said. “People can’t buy food for their children. Everyone is in the same situation, all of us.”

Fifty-four-year-old Walid Dana has owned a bakery in Bethlehem for 22 years. He told IPS that the price of one kilogram of flour has gone up by over 50 percent in the last year and now costs 3 NIS (75 cents).

“Every month things are getting more expensive,” Dana said, explaining that his priority is paying tuition costs for his six children, all of whom are studying in university. “This is the most difficult it’s ever been. We’re just surviving.”

The unemployment rate in the occupied Palestinian territories was 26 percent in 2011, and one in two Palestinians was classified as poor, according to a July report released by the United Nations’ Conference on Trade and Development (UNCTD).

The situation is even worse in the Gaza Strip. According to the United Nations’ International Labour Organisation (ILO), youth unemployment rate was 51 percent in Gaza in 2011. Currently, 80 percent of families in Gaza depend on international aid.

On Sep 2, 20-year-old Gazan Mohamad Abu Nada died after setting himself on fire. Abu Nada was reportedly protesting his family’s poverty and his inability to find a job.

Recently, two other Palestinian men also attempted to self-immolate in protest against their dire living conditions, in Hebron and Ramallah, but were stopped by onlookers before being able to set themselves alight.

Students, teachers and taxi and bus drivers have organised strikes across the West Bank, while protesters have burnt tires and blocked roads to illustrate their discontent. Violent clashes have taken place between demonstrators and PA security forces in Nablus and Hebron.

Many have also called for the resignation of Palestinian Prime Minister Salam Fayyad, who they blame for the current situation.

Earlier this year, the Palestinian Authority (PA) announced it is facing a funding crisis and is relying on donor aid to cover a budget deficit of 1.1 billion dollars. The PA has also been unable to pay its employees; public sector workers are still waiting for their August salaries.

According to Nasser Abdelkarim, a Ramallah-based economist, Israeli control over Palestinian land and resources, and PA economic policies, have widened the gap between rich and poor Palestinians.

“While prices are rocketing, wages and salaries are either steady or declining, so the gap is getting larger and larger,” Abdelkarim told IPS. “Israel still has the keys to the economy, so Israel can impede and constrain Palestinian economic activities at any time because of what they call security justifications.”

The Palestinian economy is largely constrained by the Paris Protocol, a framework for economic relations between Israel and the PA that was signed as part of the 1993 Oslo Accords agreement. Under the agreement, Israel began collecting import taxes and transferring taxes to the PA on goods destined for the occupied Palestinian territories.

The Paris Protocol also tied Palestinian trade, taxation levels, and prices for goods and services to the Israeli market. For instance, the recent spike in fuel prices in the West Bank is largely due to an increase of gas prices and value-added tax (VAT) in Israel; the difference in Palestinian and Israeli VAT, under the Paris Protocol, can’t be larger than two percent.

Israeli motorists paid over NIS 8 (two dollars) for a litre of regular gasoline in August. The country recorded the third highest price for gas in the world, according to business media network, Bloomberg.

Canceling the Paris Protocol has been one of the Palestinian protestors’ major demands.

In the meantime, Palestinians continue to struggle throughout the West Bank to meet their needs.

Twenty-seven-year-old Az Al-Bada makes NIS 1,000 (250 dollars) per month working as a clerk in a small convenience store in Bethlehem’s Old City. He said he works nine hours a day, seven days a week.

The eldest of ten children, Al-Bada’s earnings – and those of one of his brothers, who also earns NIS 1,000 per month – provide for his entire family.

“NIS 300 goes to electricity. The bill for water is another NIS 100. The telephone bill is NIS 100. For the past two or three years, we can’t meet our needs, and now everything is more expensive,” Al-Bada said. “Youth don’t have a life. We’re barely surviving.”