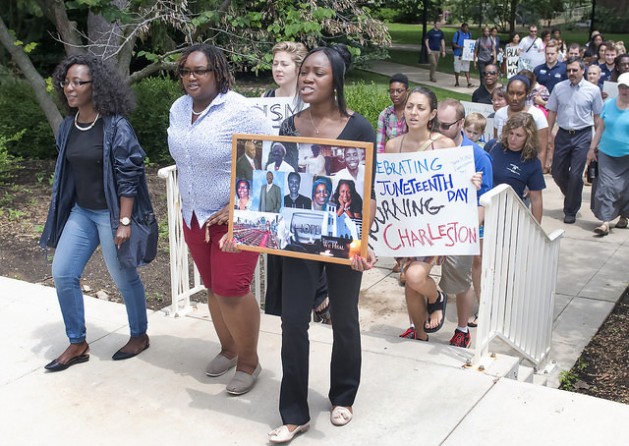 Students and faculty at Penn State university join together in a 'March for Peace, Nonviolence and Justice' on June 19 in remembrance of victims of hate crimes nationwide, including the lives lost in the tragic church shootings in Charleston, SC. Credit: Penn State/cc by 3.0

UNITED NATIONS, Jul 1 2015 (IPS) - When nine African-American worshippers were gunned down by a white supremacist inside a historic church in Charleston, South Carolina last month, there was a sharp division of opinion in the United States whether that murderous act of killing innocent civilians constituted a “hate crime” or an “act of terrorism.”

Just after the shooting, a spokeswoman for the U.S. Justice Department said the crime was “undoubtedly designed to strike fear and terror into this community, and the department is looking at this crime from all angles, including as a hate crime and as an act of domestic terrorism”.

“Terrorists” and “freedom fighters” are occasionally interchangeable – depending on who is doing the talking.

But Nihad Awad, executive director of the Washington-based Council on American-Islamic Relations (CAIR), was quoted as saying: “We have been conditioned to accept that if the violence is committed by a Muslim, then it is terrorism.

“If the same violence is committed by a white supremacist or apartheid sympathiser and is not a Muslim, we start to look for excuses — he might be insane, maybe he was pushed too hard,” he said.

The ultimate definition of terrorism has continued to defy governments, rights groups, the media and even the United Nations.

The United States and Israel continue to label “Hamas” a terrorist organisation but much of the mainstream media calls it “a militant organisation.”

Last year, the European Court of Justice upheld an appeal by Hamas, pointing out that its designation as a “terrorist” group by the European Union (EU) was “based not on acts examined and confirmed in decisions of competent authorities but on factual imputations derived from the press and the Internet.”

In an interview with Time magazine last May, Indian Prime Minister Narendra Modi said: “We should not look at terrorism from the name plates – which group they belong to, what their geographical location is, and who the victims are.”

These individual groups or names will keep changing, he said. “Today you are looking at Taliban or ISIS (the Islamic State of Iraq and Syria): tomorrow you might be looking at another name.”

Modi said the United Nations should pass the CCIT. “At least, it will clearly establish whom you view as a terrorist and whom you don’t,” he said.

But the U.N. Ad Hoc Committee remains deadlocked, mostly over definitions because “terrorists” and “freedom fighters” are occasionally interchangeable – depending on who is doing the talking.

The committee, he said, has been mandated by the General Assembly “to provide comprehensive legal framework to fill possible gaps in the existing sectoral Conventions on Terrorism.”

While the negotiations had reached an advanced stage by the fall of 2001 and there was a strong possibility of the convention being adopted that year, in the immediate aftermath of the events of 9/11, the requisite political will to reach a consensus failed to materialize, he added.

The draft CCIT, like the precedent sectoral conventions contains an ‘operational’ criminal law definition of acts of terrorism.

The CCIT has taken on added importance due to the widespread death and destruction caused by groups dubbed “terrorist organisations,” including the Islamic State of the Levant (ISIL), Al-Shabaab, Al-Nusra, Al-Qaida and Boko Haram.

“We can no longer stand by and watch as this phenomenon spreads,” says U.N. Under-Secretary-General for Political Affairs Jeffrey Feltman.

He said there are almost 50,000 Twitter accounts supporting ISIL, with an average of 1,000 followers each.

According to Arab diplomats, Israel has to be singled out for what they call “state terrorism.”

But the use of that term is strongly opposed by Israel’s supporters, including the United States and most Western nations.

Asked about state terrorism, U.N. deputy spokesperson Farhan Haq told reporters last February; “.. the definition of terrorism and what comprises a terrorist group or terrorist entity remains in the hands of member states and the treaty language they are working on.”

“They have to decide,” he declared.

Meanwhile, the approach adopted by the Bureau of the Ad Hoc Committee was to address some of the concerns by excluding applicable legal regimes from the scope of the Convention, rather than seeking to exclude specific acts.

Accordingly, a compromise proposal made by the coordinator to serve as a basis for negotiation, clarified that the activities of armed forces, which are governed by International Humanitarian Law, are not governed by the present convention and that the CCIT is without prejudice to the rules of International Law applicable in armed conflict.

This provides a ‘carve out’ for acts committed in national liberation struggles by pointing to the applicable law.

“It is further provided that in the case of activities undertaken by the military forces of States, as they are governed by other rules of International Law, such acts are not governed by the convention,” said Perera.

This approach recognises the fact that the CCIT, once adopted, will not operate in a vacuum, but alongside other legal regimes.

“And it would be a matter for the domestic courts of Member States to determine which regime applies in a given situation,” he added.

Perera also said since the CCIT is a law enforcement instrument dealing with individual criminal responsibility, issues of concern raised by certain States relating to state terrorism are sought to be addressed in an accompanying resolution to be adopted along with CCIT, which recalls the obligations of States under International Law, as set out in international legal instruments and judgments of the International Court of Justice.

This approach, he said, is in keeping with the general practice of the United Nations General Assembly in adopting Conventions.

While all proposals that have been presented remain on the table, since 2002 delegations have shown willingness to engage in the negotiations on the basis of the compromise proposal made by the Bureau, without prejudice to their respective positions.

During the Sixteenth Session of the Ad Hoc Committee in April 2013, the Committee was able to present a consolidated text of the draft convention, leaving open the outstanding scope, Article 3. The consolidated text reflects the work accomplished on the CCIT so far.

“It is very much hoped that in the 70th anniversary of the United Nations, the Member States will demonstrate the necessary political will to overcome the hurdles that have held up the reaching of a consensus on the CCIT,” Perera declared.