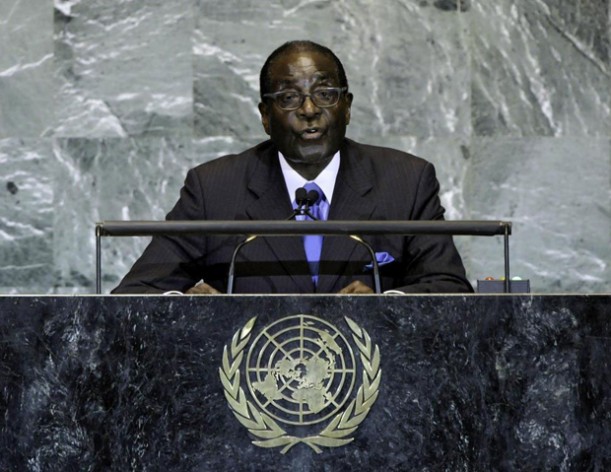 “Sometimes I am successful and other times I am not but I will continue to fight until all LGBT people can live freely without suffering any intimidation or discrimination,” Ban said.

The politically-sensitive issue also came up during the high-level segment of the General Assembly, when President Robert Mugabe of Zimbabwe highlighted the need to respect and uphold human rights while rejecting LGBTI rights.

Speaking during the 70th session of the U.N. General Assembly, he pointedly said: “We…reject attempts to prescribe ‘new rights’ that are contrary to our values, norms, traditions and beliefs.”

“We are not gays,” Mugabe continued.

The statement was met with some laughter and little applause during the General Assembly session whose theme is the “United Nations at 70: The road ahead for peace, security, and human rights.”

Mugabe’s rejection of rights for the LGBTI community remains in line with the country’s policies.

In Zimbabwe, those found guilty of performing any homosexual acts can be imprisoned or fined. For instance, in 2006, the government made it a criminal offence for two people of the same sex to hold hands, hug, or kiss.

President Mugabe has been vocal about the country’s anti-LGBT stance, describing LGBTI individuals as “worse than pigs, goats and birds” during a rally on July 23, 2013.

Similar reservations regarding LGBTI rights were expressed by several member States during the creation of the SDGs.

For instance, in the report of the Open Working Group on SDGs, Cameroon rejected any policies or reporting for SDG 5.6, which “will include or tend to include, explicitly or implicitly, the concepts of sexual orientation, gender identity, same-sex couples.”

As a result, Special Advisor on Post-2015 Development Planning Amina Mohammed publicly declared last year that gay rights were “off the table” in the SDG agenda.

The SDGs currently make no mention of sexual orientation or LGBT rights.

However, a joint statement released on Sep. 29 by 12 U.N. entities including United Nations Development Programme (UNDP) has called on States to end violence and discrimination against the LGBTI community.

“International human rights law establishes legal obligations on States to ensure that every person, without distinction, can enjoy these rights,” the statement says.

“Failure to uphold the human rights of LGBTI people and protect them…constitute serious violations of international human rights law and have a far-reaching impact on society…and progress towards achievement of the future Sustainable Development Goals,” declared the U.N. agencies.

In Zimbabwe, anti-gay legislation had already hindered LGBTI-related efforts including the eradication of HIV/AIDS under the Millennium Development Goals (MDGs).

According to the United Nations Programme on HIV/AIDS (UNAIDS), Zimbabwe has one of the largest HIV rates in the world, with an estimated 15 percent of residents living with HIV.
(END)