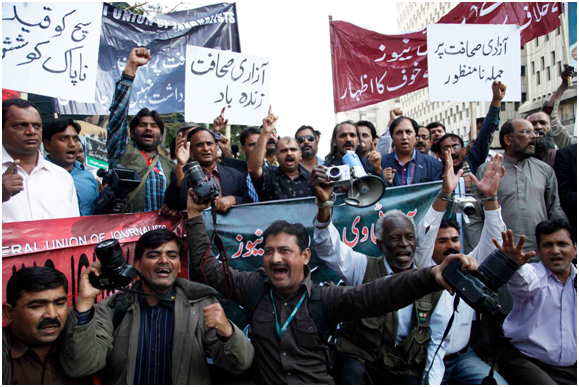 Member journalists of Karachi Union of Journalists and Karachi Press Club stage a protest demonstration against flurry of attacks on press freedom and killing of journalists across Pakistan. The journalists are holding banners and placards inscribed with slogans “Attacks on Press Freedom Unacceptable”, “Long Live Press Freedom” and “Attempt to muzzle free press will be opposed”. Credit: Saleem Shaikh/IPS

ISLAMABAD, Pakistan , Feb 5 2016 (IPS) - Pakistan continues to remain one of the most dangerous countries for journalists, where frequent attempts to restrict press freedom are commonplace and challenges to expanding media diversity and access to information abound.

Tense and uncertain security conditions, looming risks of terrorism and extremism-related activities, rampant political influence and the feeble role of the country’s democratic institutions, including parliament and judiciary, constitute the main reasons behind the sorry state of press freedom in Pakistan.

To address this issue, editors and news directors of a large number of Pakistani newspapers and television channels formally established ‘Editors for Safety’, an organisation focused exclusively on issues pertaining to violence and threats of violence against the media.

The organization would work on a core philosophy that an attack on one journalist or media house would be deemed as an attack on the entire media. The body would also encourage media organizations to speak with one voice against the ubiquitous culture of impunity, where journalists in the country are being frequently attacked while perpetrators are rarely brought to justice.

Former Federal Minister for Information and Broadcasting, Mr. Javed Jabbar, welcomed the formation of Editors for Safety and said “today, militants alone do not target press freedom and journalists in the country. Political, religious, ethnic and the law enforcement agencies also attack them.”

In 2015, the country was ranked 159th out of 180 countries evaluated in the World Press Freedom Index published by Reporters Without Borders (RSF).

Pakistan has been a “frontline state” for almost four decades, which has polarised society and ruined people’s sense of security. Because of the Afghan war, the areas bordering Afghanistan, including Khyber Pakhtunkhwa, Balochistan and tribal areas in the country’s northwest region, are the most troubled areas for journalists to report from.

Media freedom across the country – and particularly in the terrorism-hit northwest region – has deteriorated over the last several years in part because of extremist groups who hurl threats to journalists for reporting their activities. Religious extremists go after media persons as they believe the latter do not respect their religion and harm it on the pretext of press freedom.

On March 28, 2014, Raza Rumi, a TV anchor, blogger and widely-acclaimed political and security analyst in Pakistan, narrowly escaped death when gunmen opened fire on his car in an attack that left his driver Mustafa dead. He moved to the U.S. soon after the attack on his life, which was triggered by his liberal and outspoken voice on politics, society, culture, militancy, human rights and persecution of religious minorities.

Last year on November 30, one journalist and three other employees of Lahore-based Din Media organization, which runs a TV channel and daily Urdu language newspaper, were killed when unknown miscreants lobbed a hand grenade on the office of the media organisation in Lahore, Pakistan’s second largest urban city of 20 million people. The attack drew countrywide condemnation protests by journalists. The Prime Minister announced his pledge to bring those behind attack to the book and boost security measures for media offices and journalists.

Afzal Butt, president of Pakistan Federal Union of Journalists (PFUJ) told IPS,
“We have conveyed the deep concern of the journalist community about the deteriorating state of press freedom to the Prime Minister and federal and provincial information ministers. We have also reminded them of their commitments made for protecting lives of journalists and press freedom in the country. But it has fallen on deaf ears.”

International media watchdogs including the Committee to Protect Journalists (CPJ) and RSF have kept highlighting the dismal state of press freedom in the country in their [annual] reports from time to time. Around 57 journalists have been killed in the line of the duty between year 1992 to 2015 and hundreds other harassed, tortured and kidnapped, according to recent data compiled by CPJ, a New York-based independent, non-profit organisation dedicated to the global defence of press freedom. In its 2015 report, CPJ ranked Pakistan as the sixth most deadly country for journalists.

Pakistan is ranked ninth out of 180 countries on CPJ’s Global Impunity Index, which spotlights countries, where journalists are slain and the killers go free.

“Incidents of threats, attacks and killings of journalists in Pakistan are the clear evidence of how critical the situation has become due to thriving culture of impunity,” said Mazhar Abbas, former deputy news director at the Ary News TV in Karachi and well-known champion of press freedom.

The good news is that the country has battled against impunity through judicial actions and institutionalisation of mechanisms to tackle this problem. For instance, two landmark convictions and arrests brought relief to the aggrieved families of slain TV journalists Wali Khan Babar, murdered in 2011 in Karachi, and Ayub Khattak, murdered in Karak district in conflict-prone Khyber Pakhtunkhwa province in Pakistan’s northwest.

The cases made progress thanks to relentless efforts by families of journalists, journalist unions and civil society pressure groups with cooperation from government and justice system, Khursheed Abbasi, PFUJ’s secretary general, said. The judicial commission set up to probe the attempt to murder Islamabad-based eminent television journalist Hamid Mir associated with the Geo News TV is part of this movement forward. Further to this was the announcement in April 2015 by the provincial government of Balochistan to establish two judicial tribunals to investigate six murder cases of journalists since 2011.

In another positive development, on March 9, 2015, the Islamabad High Court upheld the conviction of Mumtaz Qadri, the killer of publisher of English newspaper Daily Times Mr. Salman Taseer, under Section 302 of the Pakistan Penal Code (PPC). Qadri, his official guard in Islamabad in January 2010, killed Taseer, who was governor of Punjab province at that time.

“A free press is a fundamental foundation of sustainable and effective democracy. Any effort aimed at scuttling press freedom will only weaken democracy and democratic institutions,” warned journalist-turned Pakistani parliamentarian Mushahid Hussain Syed. He said that politicians need to realise that supporting endeavours for press freedom at any level would benefit the democratic political leaders themselves.