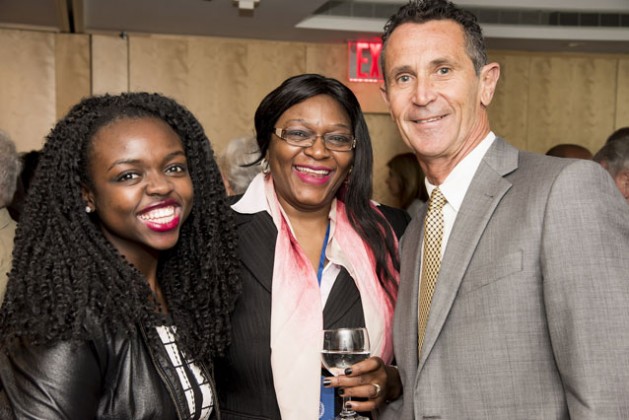 On the right Bruce Wilkinson, President and CEO of CMMB - Healthier Lives Worldwide. Next to him (in the middle) stands Ambassador Mwaba Kasese-Bota, Permanent Representative of the Mission of Zambia to the United Nations, at the CMMB conference on $500 million for the U.N. SDGs, event on March 21. Photo: CMMB

The commitment will be deployed through the NGO’s flagship initiatives CHAMPS– which is a maternal and child health program – and the Healing Help– which is a platform for the distribution of medications and health commodities in partnership with the pharmaceutical companies. The announcement was made by CMMB’s President and Chief Executive Officer (CEO), Bruce Wilkinson, at a press conference at the U.N. Headquarters on March 21. Speaking along with him were the Permanent Representatives of the Missions of Zambia, Kenya, and Haiti.

“CMMB is taking a bold step by providing $500 million over the next five years for general support of the UN’s SDGs and the Every Woman Every Child campaign, in particular. We can take this important step because we work in partnership with so many equally dedicated organisations,” said Wilkinson.

The NGO’s new commitment, which is in line with the updated Global Strategy for Women’s, Children’s and Adolescents’ Health– launched in 2015 by Secretary-General, Ban Ki-moon, in order to end all forms of preventable death for women, children and adolescents – builds on a previous commitment made in 2014.

The target of 20 CHAMPS by 2020 was presented with an initial pledge of 22 million dollar cash, and 33 million dollar in Gifts-in Kind, mostly pharmaceutical products.

“We are ahead of schedule and have already committed 8 million dollars to our pledge of 22 million,” commented Wilkinson, who remarked that eight CHAMPS programs have been successfully implemented in those countries, and the ninth one will be implemented this summer.

“Champs brings together the clinical and community aspects”, Wilkinson told IPS, “linking households in a tangible way to sustained public and clinical interventions based on real need. We are also able to track and measure effective health delivery which in the long run changes peoples demand for health services as a basic right.”

“Over 1,200 professional medical volunteers have been deployed,” he pointed out, including “680,000 (people) have been directly assisted of which 200,000 mothers and children under the age of five. 3,843 community health workers and clinicians have been trained and 165 medical facilities have been supported (through) the CHAMPS programming.”

Praising the long relationship between CMMB and local partners in Zambia, Ambassador Mwaba Kasese-Bota, Permanent Representative of the Mission of Zambia to the U.N. congratulated CMMB for its renewal commitment to the U.N. 2030 Agenda.

“CMMB has been working to reach [remote] areas in (Zambia) and have been providing the much needed services, along with the economic empowerment for women in order to ensure that women and their families can live healthy lives […] We are asking for others to join the partnerships that have already been created by CMMB.”

Paul Mikov, CMMB’s Vice President for Institutional Partnerships, said that despite the immense progress made in reducing global maternal and child mortality rates through the implementation of the U.N.’s Millennium Development Goals (MDGs) in 2000, and the new 17 SDGs adopted in 2015, “hundreds of thousands of mothers still die every single year while giving life at birth, and almost six million children under 5years of age die every year from preventable causes.”

Figures from the World Health Organisation show that since the 1990s global maternal mortality has dropped by 43 percent. However, in 2015, 303 000 women were estimated to die due to childbirth complications, diseases, or infections. Currently, around 830 women die every day, 99 percent of whom live in developing countries.

For over a century, CMMB-Healthier Lives Worldwide has been fighting on the front lines for global health, equality, environmental protection, access to safe and clean water, and women’s empowerment, Wilkinson remarked, while also leading several health relief activities in the highest burden countries, where women and children in local communities lacked access to adequate health services.

According to the data provided by the NGO, over the last ten years, the organisation has provided over two billion dollars in medicines and health and medical supplies to local healthcare partners in 120 countries. In 2015, CMMB collaborated with more than 220 institutional partners worldwide.

The event on March 21 was an occasion to celebrate CMMB-Healthier Lives Worldwide long-standing partnership with the pharmaceutical industry, which in many ways has operated as the backbone for this joint venture of bringing needed resources and services in high burden countries worldwide.

“Our long standing relationships with the pharmaceutical industry will be optimized to meet the needs especially in the highest burden countries where women and children experience the highest morbidity and mortality rates globally,” said Wilkinson.

“Our new logo expresses our newer vision and strategy, the way we work in partnership and our commitment to improve the life of women and children. This is an important step for CMMB to be seen as modern and relevant. […] Our visual identity illustrates who we are. It is a symbol of our faith our core values and our mission to achieve Healthier Lives Worldwide.”