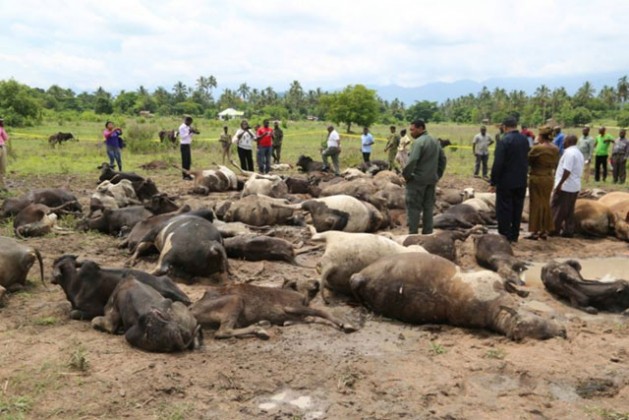 PAWAGA, Tanzania, Mar 3 2016 (IPS) - At a remote village of Itunundu in Iringa, farmers and pastoralists recently met to discuss the best way to share land resources while charting out a strategy to prevent unnecessary fights among themselves. No one in the village ever imagined that this meeting would ever take place as the two groups had for long considered themselves enemies: they often clashed for water and pastures to feed their animals thus causing deaths and loss of property.

But the real story of that rare occasion was that it’s possible for rival groups to iron out their differences, thanks to a ‘loose’ coalition that had been formed.

For decades, farmers and herders in this tiny village nestled in Pawaga division, located 65 km from Iringa region in Tanzania’s southern highlands, have been scrambling for water for irrigation and pastures for feeding animals; in the process, triggering deadly conflicts.

Pawaga division is considered one of the bread basket areas of Tanzania where people grow maize, rice and vegetables in the valleys whereas others keep animals in the highlands. Despite a clear demarcation of the areas that are controlled by farmers and those controlled by herders, there have been frequent clashes.

There are now promising signs that hostility between the two groups may be coming to an end, thanks to a new alliance that has brought farmers and herders to the negotiating table. The coalition, which was initiated by Tanzania Natural Resources Foundation (TNRF) – a civil society-based initiative on land-based resources — tries to build an understanding of the political economy of resources-based conflicts and suggest alternative solutions.

Deadly conflicts have been raging in Tanzania for decades as farmers and herders scramble for resources as climate change continues to take its toll. The worst conflict between pastoralists and farmers occurred in December 2000 in Kilosa district, Morogoro region, where 38 farmers were killed.

Hostilities re-ignited in 2008 and eight people were killed, several houses set ablaze. Pastoralists, who are considered more affluent than farmers, are often accused of influencing political decisions by bribing local leaders who allow them to let cattle graze in farmland and trample on crops.

Although the government has tried to foil these conflicts by opening up more grazing areas for nomadic pastoralists, analysts say such clashes have persisted. Tanzania has approximately 21 million head of cattle, the largest number in Africa after Ethiopia and Sudan. Livestock’s contribution is at least 30 per cent of agricultural gross domestic product. Through the new alliance, farmers and pastoralists in Pawaga often meet and openly talk to find solutions on matters that affect them.

Godfrey Massay, TNRF’s land-based investment coordinator, said the ‘loose’ coalition has been trying to resolve conflicts through discussions where pastoralists and farmers meet and openly express their point of views. “Farmers and herders need to know that there are people who benefit from their conflicts and do not wish to see the conflicts resolved,” he told IPS in an email.

Massay said the recurring fights is a symptom of a bigger problem that requires joint efforts to resolve them because they involve externally- driven factors of bigger agricultural and conservation interests.

Pawaga division has become the centre of conflicts due to its plains and valleys that attracts competing interests of pastoralists, farmers and wildlife conservation. The division, which borders Ruaha National Park, attracts many herders from neighbouring areas with the number of cattle surpassing 35,000.

A baseline study conducted by TNRF in the area in 2014 revealed that resource-based conflicts in Pawaga are caused by the lack of land use planning, ‘green’ grabbing, increased large-scale agricultural investments, weak policy, corruption and scepticism toward pastoralism as a viable livelihood option.

While some farmers in the division accuse some of their leaders of harbouring ill-motives against them, other claim that pastoralists have invited their friends from neighbouring districts. “We have identified areas of interest and mutual understanding between the two groups, I don’t see any reason why they should keep fighting,” said Khalfani Lulimi, a ward councilor at Itunundu.

According to Massay, TNRF separately initiated talks with village leaders, farmers and pastoralists group last year to understand their point of view and establish a common area of interest, Massay said.

Both groups had strong leaders who easily understood a bigger picture of the problems they were facing, thus it was easy for them to agree to work together and develop a joint work plan, TNRF officials said. After months of negotiations, the coalition was officially launched last year after electing leaders and developing rules of conduct as to how they would run their work.

The coalition was then introduced to district authorities and started a close working relationship with village leaders. “This is the first and the only platform that brings together farmers and pastoralists to discuss issues that affect them openly without fear or favour” said Massay.

Barely six months since the alliance’s formation, the number of violent clashes have dropped, Pawaga division officials said. “This shows that no matter how deep the conflict is, it can be resolved by just talking”said Donald Mshauri, Iringa district land officer.

The coalition has won confidence from both groups that have agreed to allow pastoralists graze on rice husks after harvesting seasons for a small fee which is payable to the village government. Although this innovation is still in its pilot stage, it has succeeded in eliminating the existing animosity between rival groups, TNRF officials said.

Henry Mahoo, professor of agricultural engineering at Tanzania’s Sokoine University of Agriculture, told IPS that in order to resolve tensions between the two groups, a land use plan, which will clearly identify areas under pastoralists’ ownership and those controlled by farmers, should be drawn up. “All concerned parties must be involved in the negotiation process, and there must be a forum where farmers and pastoralists openly talk about their problems,” he said.