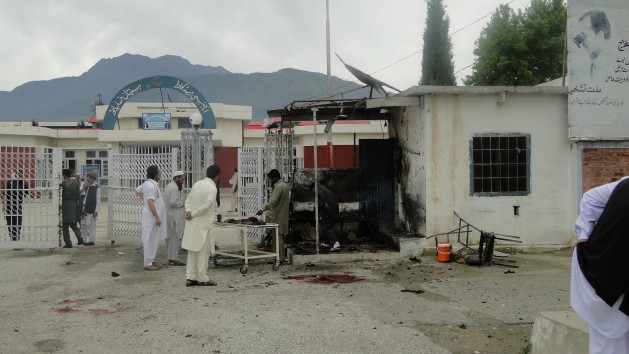 UNITED NATIONS, Apr 29 2016 (IPS) - Hospitals, health care workers and patients in war zones are supposed to be protected under international humanitarian law yet recent attacks from Syria to Afghanistan suggest that they have become targets.

The seeming lack of respect for the sanctity of health care in war zones has prompted UN Security Council members in New York to consider a new resolution designed to find new ways to halt these attacks.

The Security Council is expected to vote on the resolution on May 3, just days after Al Quds Hospital in Aleppo, Syria was bombed. Twenty seven staff and patients were killed in the airstrike on the hospital on Wednesday night, Dr Hatem, the director of the Children’s Hospital in Aleppo told The Syria Campaign.

Among the victims was Dr Muhammad Waseem Maaz, who Dr Hatem described as “the city’s most qualified paediatrician.”

Staffan de Mistura, UN Special Envoy for Syria told journalists in Geneva Wednesday that Dr Maaz was the last paediatric doctor left in Aleppo, although IPS understands there is another paediatrician in the Aleppo countryside.

Dr Hatem said that Dr Maaz used to work at the children’s hospital during the day and attend to emergencies at the Al Quds hospital at night time.

“Dr Maaz stayed in Aleppo, the most dangerous city in the world, because of his devotion to his patients,” said Dr Hatem.

“When the bombing intensifies, the medical staff run down to the ground floor of the hospital carrying the babies’ incubators in order to protect them,” he said.

As a permanent member of the UN Security Council, Russia will be expected to vote on the proposed new resolution reinforcing the protection of hospitals, doctors and patients in war zones.

“When the bombing intensifies, the medical staff run down to the ground floor of the hospital carrying the babies’ incubators in order to protect them.” -- Dr Hatem, director of the Children’s Hospital in Aleppo.

Another Security Council member accused of bombing a hospital, the United States, is expected to release its report Friday of its own investigation into the attack on the Médecins Sans Frontières (MSF) hospital in Kunduz, Afghanistan on October 3 2015.

MSF say that 42 people we killed in the sustained bombing of the hospital, including 24 patients and 18 staff.

Roman Oyarzun Marchesi, permanent representative of Spain to the UN said that the “the wake up call (for the Security Council resolution) came from organisations such as Médecins Sans Frontières who are forced to stay out of certain areas or countries due to the lack of protection on the ground.”

“Attacks against the provision of health care are becoming so frequent that humanitarian actors face serious limitations to do their jobs,” said Marchesi at an event held to discuss the proposed resolution at the International Peace Institute earlier this month.

The event brought together representatives from the medical community with the five Security Council members drafting the resolution: Egypt, Japan, New Zealand, Spain and Uruguay.

“As of today suspected perpetrators get away with self-investigating and there’s no independent follow-up of attacks,” said Cone.

“It is a critical moment for member states to reaffirm the sanctity of the medical act in armed conflict,” he said.

The current situation does not reflect the respect given to health care in war from the earliest stages of the Geneva conventions, Stéphane Ojeda, Deputy Permanent Observer to the United Nations, International Committee of the Red Cross told the meeting.

The principle that health care personnel should not be punished for caring for the wounded and sick also needs to be respected, said Ojeda. “If you start questioning this, that’s a whole pillar of humanity starting to collapse,” he said.

Cone also added to Ojeda’s calls for the duties of doctors in caring for the wounded and sick to be respected: “We can not accept any criminalisation of the medical act, any resolution should reinforce and strengthen protection for medical ethics,” he said.