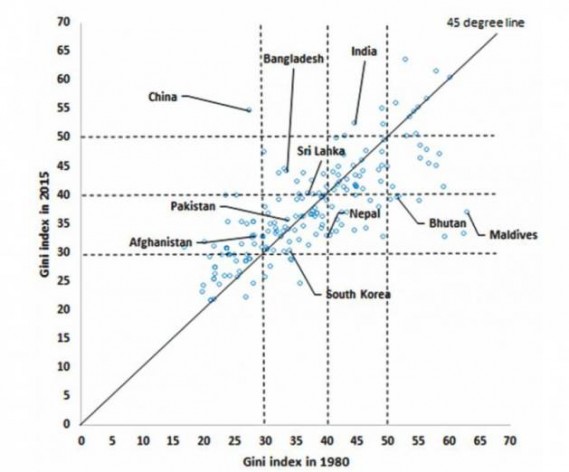 Sep 1 2016 - In recent years, there has been a growing interest among general people, researchers and policymakers in income inequality, its causes, and its effects. The most popular index of income inequality is the ‘Gini index’, which measures the inequality among levels of income of the people of any country. A Gini coefficient of zero means perfect equality, where everyone has the same income, and a Gini coefficient of 1 (or 100 percent) expresses maximum inequality.

For meaningful comparisons among different countries with respect to their levels and trends in income inequality, we need comparable data. National surveys on households’ incomes and expenditures in different countries provide data on the Gini index of these countries for some years.

The Standardised World Income Inequality Database (SWIID), introduced in 2008, provides a dataset on income inequality that facilitates comparability for the largest possible sample of countries and years.

Using the SWIID database, the World Economy Database (WED) version 9.1 has generated a time series database on the “Gini index” for 207 countries over the period between 1970 and 2015 by filling missing observations with the help of different estimation methods.

We also explored the factors affecting inequality in the cross-country and over time contexts. Results from a fixed effect panel regression suggest that while rise in the real GDP per capita tends to have a small negative association with the Gini index, an increase in both life expectancy at birth and net secondary school enrollment are strongly associated with the decline in the Gini index.

These suggest that, an increase in per capita real GDP is not a guarantee for the reduction in income inequality, whereas investment in social infrastructure with the aim of raising the life expectancy at birth and a rise in secondary school enrollment can be very instrumental in reducing income inequality.