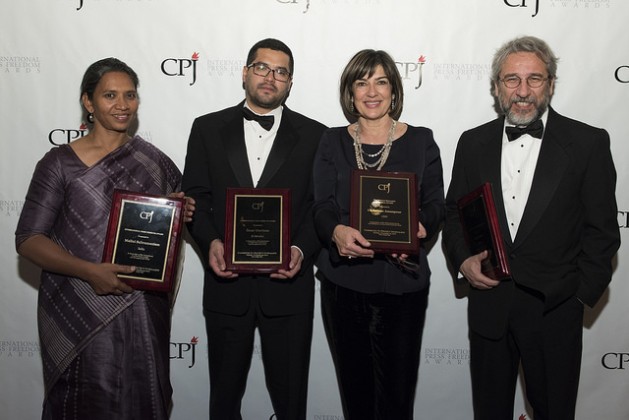 The four winners from El Salvador, India, Turkey and Egypt were honoured for their courageous achievements by the Committee to Protect Journalists at the 26th International Press Freedom Awards on November 21.

“These awardees are truly remarkable journalists, all of whom have carried out their work with the knowledge that doing so puts them in real danger,” said CPJ’s Board Chairman Sandra Mims Rowe.

“It is heartening to see such resolve, and to know that even under the most threatening conditions, journalists will always find a way to do their job,” she continued.

Since 1992, CPJ found that 1220 journalists have been killed, the majority of whom were murdered with complete impunity. In 2015 alone, nearly 200 journalists were also imprisoned worldwide.

Can Dündar, one of the awardees and chief editor of Turkish daily newspaper Cumhuriyet, was arrested in November 2015 and sentenced to 6 years in prison after publishing a report claiming Turkey’s intelligence service’s plans to send weapons to Syrian rebel groups.

Dündar, who was arrested on charges of disclosing state secrets, espionage and aiding a terrorist group, told IPS of the importance of press freedom.

“This award is a kind of message from the world to us that they are aware of our struggle,” Dündar continued.

According to Reporters Without Borders (RSF)’s Press Freedom Index, Turkey is ranked 151st out of 180 countries. Since the election of President Recep Tayyip Erdoğan in 2014, more than 1800 cases were opened against journalists and cartoonists for insulting the leader.

The country’s media crackdown has only deepened since the coup attempt in July as the Turkish government has allegedly used its state of emergency and anti-terror laws to shut down over 100 news agencies and imprison approximately 120 journalists.

Óscar Martínez, another awardee and investigative reporter from El Salvador, also highlighted the important role of media to IPS, stating: “Only in countries where the press can exercise its right to freely inform is it possible to illuminate those dark corners [of societies] that would otherwise stay in the dark.”

One such dark corner is the ongoing violence in El Salvador. The Central American nation is now the world’s most violent country that is not at war, with over 6,500 murders in 2015 alone. After reporting on extrajudicial killings by police, Martínez received death threats and was forced to temporarily flee the country.

Though CPJ’s award can help the press freedom cause, Martínez added that governments must ensure and provide real protection for journalists.

Malini Subramaniam similarly reports on abuses by police and security forces and extrajudicial killings, but in India’s “Red Corridor” where a five-decade long conflict between Maoists and the government has persisted.

Working in the Indian State of Chhattisgarh, first as a development worker then as a journalist, Subramaniam told IPS that she saw indigenous residents, known as adivasis, caught in the crossfire without essential services or a voice.

“These stories were not coming out…I realised that these stories need to be told,” Subramaniam told IPS, adding that the dangers of telling the story did not matter to her.

Due to her critical reports on human rights abuses, Subramaniam has had to cope with numerous instances of police interrogation and harassment, eventually forcing Subramaniam to leave the Bastar district of Chhattisgarh.

However, Subramaniam noted that she is just one of the journalists that faced such perils there. According to CPJ, at least four journalists are imprisoned in the Central Indian state, and other journalists including a BBC correspondent have been forced to flee the area for fear of reprisal.

“It’s not just about an individual, it is about the larger field,” Subramaniam told IPS.

“This award will sort of amplify the situation that is there in Bastar as far as reporting is concerned, what’s happening to the journalists that are there and as a message to the government of India to wake up,” she continued.

CPJ also honoured Mahmoud Abou Zeid, an Egyptian photojournalist who has been in prison since August 2013.

Zeid, who is also known as Shawkan, was arrested while covering clashes between Egyptian security forces and supporters of ousted President Mohamed Morsi. Among the charges he faces is weapons possession, illegal assembly and murder.

Egypt is the second largest jailer of journalists in the world, only second to China, CPJ found.

Attending the awards ceremony on behalf of Shawkan was his childhood friend Ahmed Abu Seif.

“I still sometimes want to wake up and for somebody to tell me that it is just a dream,” Seif told IPS, adding that it hurts him that Shawkan is not there himself to receive CPJ’s award.

“This award means a lot for recognising a journalist behind bars. It’s also a sign to tell the Egyptian government that…even if you don’t recognise him as a journalist, we do,” he continued.

The fight for press freedom is not limited to countries like Egypt and Turkey, but also continues to remain an issue in the United States.

Receiving the Burton Benjamin Memorial award was Christiane Amanpour who pointed to the perils American journalists face and may continue to face after President-elect Trump assumes office.

“I never in a million years thought I would be up here on stage appealing for the freedom and safety of American journalists at home,” she told attendees, pointing to a tweet by President-elect Trump that said “professional protesters” were “incited by the media.”

She particularly noted the issues U.S. media faced while reporting the presidential campaigns in balancing neutrality and truth, but said that this cannot continue.

“I learned long ago, covering the ethnic cleansing and genocide in Bosnia, never to equate victim with aggressor, never to create a false moral or factual equivalence, because then you are an accomplice to the most unspeakable crimes and consequences. I believe in being truthful, not neutral and I believe we must stop banalising the truth,” she said.

She added that the media can either contribute to a more functional system or to deepen the political dysfunction.

“This above all is an appeal to protect journalism itself…we have to stand up together–for divided we will all fall,” she concluded.