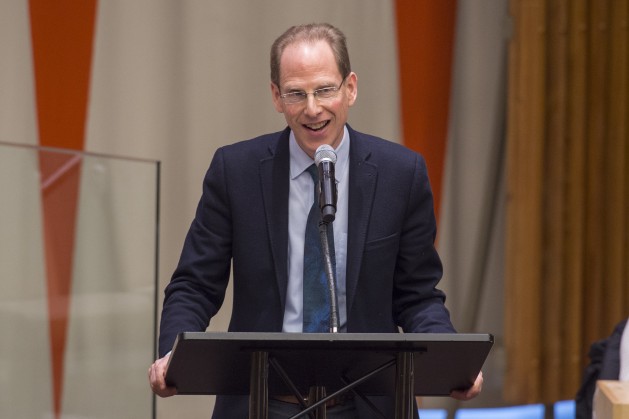 UNITED NATIONS, Apr 2 2017 (IPS) - Guardianship laws meant to protect people with autism actually deprive them of their basic rights and autonomy, according to experts on a UN panel.

When people with autism turn 18, their parents or other caregivers are encouraged to legally become their guardians. However, as Zoe Gross an autism self-advocate says the practice deprives people with autism of the ability to influence their own lives.

Gross was one of several panelists at a special event held to ahead of World Autism Awareness Day on the theme ‘Toward Autonomy and Self-Determination” at UN headquarters in New York on Friday.

The laws affect all aspects of a persons life, says Gross:

“Where you live, where you work, who you spend time with, whether you want to get married or have children, even whether to have medical procedures.”

“Regardless of whether your guardian is acting in your best interests or not, if you are under guardianship you don’t have access to the same rights that most adults take for granted,” -- Zoe Gross, Autism Self Advocate.

“Regardless of whether your guardian is acting in your best interests or not, if you are under guardianship you don’t have access to the same rights that most adults take for granted,” said Gross, who is Director of Operations at the Autistic Self Advocacy Network.

Theresia Degener, Chairperson of the UN Committee on the Rights of Persons with Disabilities spoke strongly against guardianship, also described as substituted decision making at the event.

“Substituted decision-making is a human rights violation,” said Degener. “It is called protection but it is oppression.”

“Guardianship laws are a harmful traditional legal practice coming from the north and it is now widespread all over the world and it must be repealed.”

“It has been 10 years since we joined with others to successfully campaign for a World Autism Awareness Day through the UN General Assembly,” Her Highness Sheikha Moza bint Nasser, Chairperson of Qatar Foundation, told IPS.

“Our aim was to shine a bright light on autism as a growing global health issue,” she said.

“On this 10th anniversary, it is vital that the global community continues to increase awareness and develop knowledge across the world of autism spectrum disorder (ASD).”

“Only by celebrating the unique talents and achievements of persons with autism will we give a voice to the millions of individuals worldwide who are looking for ways to realise their full potential.”

Also speaking at the event, Simon Baron-Cohen, Director of the Autism Research Centre at the University of Cambridge spoke about how people with autism have difficulties with social relationships and communication but also need need respect and acceptance for their differences.

Baron-Cohen described how people with autism report feeling that even those they are close to may take advantage of their social naivety or different communication skills.

Baron-Cohen also emphasised that autism is a reflection of “neurodiversity, that our brains are not all wired the same.”

He also emphasised the potential positive sides of autism.

“Autism Is not a disease in the classical sense because it invariably leads to disability it also often leads to talent for example in excellent attention to detail and excellent ability to spot patterns.”

Baron-Cohen said that it was impossible to separate a discussion about independence and autonomy for people with autism from a discussion of their human rights.

“All people with autism, like all people with a disability, have legal capacity even if they need support to make decisions and need safe-guarding,” said Baron-Cohen.

“Legal capacity and equal recognition before the law are inherent rights that people with autism enjoy on an equal basis with other members of our societies,” said UN Secretary-General Antonio Guterrres in a statement.

“Let us ensure that we make available the necessary accommodations and support persons with autism with access to the support they need and choose so they will be empowered to face the key milestones in every person’s life, such as deciding where and with whom to live, whether to get married and to establish a family, what type of work to pursue and how to manage their personal finances.”

“When they enjoy equal opportunity for self determination and autonomy, people with autism will be empowered to make an even stronger positive impact on our shared future.”