No Justice, No Peace for Yemeni Children 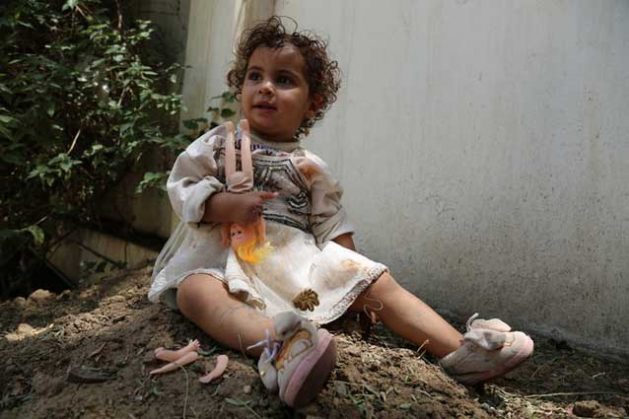 'Zuhoor_Yemen' : One-year-old Zuhoor was forced to have the fingers of her right hand amputated after being seriously injured by an airstrikes near Sana'a. Credit: Mohammed Awadh/Save the Children

UNITED NATIONS, Jul 21 2017 (IPS) - Human rights groups are urging the UN Secretary-General to include the Saudi-led Coalition (SLC) in a child rights’ “shame list” after documenting grave violations against children.

Save the Children and the Watchlist on Children and Armed Conflict have documented at least 23 SLC airstrikes which injured or killed children, prompting an urgent call for the UN to help protect children caught in the midst of the deadly two year-long conflict.

“Everywhere you go in Yemen you see the devastation caused by airstrikes…all parties have been responsible for the unnecessary deaths of children in Yemen, and the Saudi Arabia-led coalition is among them,” said Save the Children’s Yemen country director Tamer Kirolos.

“The UN Secretary-General must put the interests of children first – and hold all of those responsible to account,” he continued.

The human rights groups compiled evidence of “grave violations” in an effort to push Secretary-General Antonio Guterres to include the SLC in a report on child rights violations in conflict, expected to be released next month.

The annual Children and Armed Conflict report documents grave violations including the killing and maiming of children and attacks on schools and hospitals. It also includes an annex which names and shames perpetrators of such violations.

The coalition was initially listed in the 2016 report, only to be removed a few days later after the Gulf state reportedly threatened to withdraw funding from critical UN programs.

“I had to make a decision just to have all UN operations, particularly humanitarian operations, continue,” former Secretary-General Ban Ki-moon said following the move.

“I also had to consider the very real prospect that millions of other children would suffer grievously if, as was suggested to me, countries would defund many UN programs,” he added.

The 2016 report found that the coalition was responsible for 60 percent of all recorded child deaths and injuries.

This pattern has only continued as Save the Children and Watchlist documented the killing and maiming of more than 120 children.

In one incident, multiple airstrikes on a market in Hajjah in March 2016 left 25 children dead and four injured.

Multiple bombings of schools and hospitals have also been recorded, including attacks on two different Médecins Sans Frontières (MSF)-supported hospitals.

Beyond the immediate and devastating effects on children, such attacks have exacerbated a humanitarian crisis in the country including the “world’s worst cholera outbreak.”

According to the UN Office for the Coordination of Humanitarian Affairs (OCHA), children under the age of 15 account for 40 percent of the almost 300,000 suspected cholera cases and make up a quarter of cholera-related deaths.

The 1.8 million acutely malnourished children under five are particularly vulnerable to such communicable diseases.

However, the health system remains unable to respond to the needs of the population as only 45 percent of health facilities remain with limited functionality.

“As war grinds on and children’s lives are blighted not just in Yemen but around the world, the Secretary-General’s annual list has rarely been more important,” the organisations said in a briefing.

“It offers an opportunity to stand up for children caught in today’s brutal conflict to say that their lives and rights have value,” they continued.

In order to hold perpetrators accountable, the list must be “executed without fear or favour” where every party to the conflict that has committed grave violations is included, they added.

Though listing the SLC is not an end in itself, failure to include a key party to the conflict will set a “dangerous precedent” that others around the world will take note of.

“It would also betray the families whose loved ones were killed, the children who suffered life-changing injuries in airstrikes last year…Yemen’s children deserve accountability for the attacks committed against them,” Save the Children and Watchlist concluded.

The coalition is comprised of Saudi Arabia, Bahrain, Kuwait, United Arab Emirates, Egypt, Jordan, Morocco, and Sudan. Because of an ongoing diplomatic rift, Qatar is no longer a part of the SLC.

More than 4,000 children have been killed or injured by all sides of the conflict.