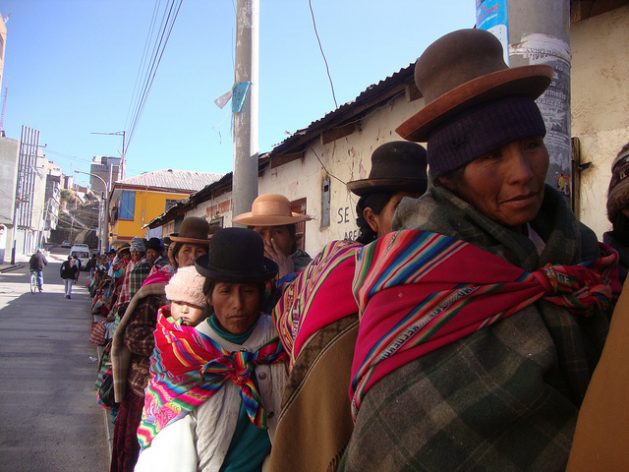 Poor women from the Andes highlands queuing up for aid in a village in Peru's Puno region. Credit: Milagros Salazar/IPS

LIMA, Aug 4 2017 (IPS) - Domestic violence is alarmingly prevalent in Peru. Not only is it statistically more common than in other, more progressive cultures, but Peruvian women tend to accept it as simply a ‘part of marriage.’

It was therefore both surprising and understandable that the domestic violence classes at a women’s center in the Cajamarca region, observed throughout the summer of 2016, were always crowded and bustling, teeming with adult women and teenage girls.

“A lot of women don’t speak out against domestic violence because they aren’t as educated, they don’t know about it as much,” one woman called out during class one afternoon. Her fellow classmates all nodded. “Their husbands will insult them and hit them, and the women believe that it’s their fault, that they deserve that kind of treatment.”

One of the class attendees, Cecilia, was reluctant to speak after initially offering to do so, instead staring down at her skirt while her friend sitting next to her, Yolanda, asked, “Are you ready to talk about it?” To which Cecilia quietly replied, “No.”

(Surnames have been omitted to ensure confidentiality.)

When asked if she or anyone she knew has had experience with domestic violence, Yolanda’s eyes immediately darted to Cecilia.

“Many of my friends have experience with it,” she said in Spanish.

When asked if she thinks that some women don’t object to being subjected to domestic violence because they think it’s simply a part of marriage, or a part of the larger culture, Yolanda whispered to Cecilia, “Come on, tell them, tell them.” Cecilia, however, did not answer.

As with almost any aspect of society, education makes a huge difference, but especially so when it comes to domestic violence. According to a study carried out by Princeton University, the less education you have, the higher your chances of being domestically abused are: 42.04% of women with no education at all, and 42.80% of those with primary school education had been abused – compared to 28.93% of those with tertiary, college or more.

All of the women in the class fell into one of two camps. Some wore jeans and tank tops. Others wore traditional long skirts, button down shirts and cardigans. Some were timid – some were not. The ones who spoke openly, condemning Machismo Culture and lecturing the others on the importance of marrying your best friend, were wearing leggings. The ones with waist-length braids and farming boots stayed quiet.

Contributing to that Machismo Culture is the reality that Peru is a sometimes vision-bending fusion of the Old existing alongside the New. While many in Peru drive cars, have cell phones and wear modern clothing, the simultaneous perseverance of a rural lifestyle that feels like going back in time offers fertile soil for that outdated, patriarchal society to take root in.

Consequently, domestic violence is more prevalent among rural women, as is their willingness to put up with it.

“It’s even worse in the rural areas. There, women are just expected to stay in their homes and that’s it,” Yolanda said. “The women from out in the country are quiet. They don’t talk, they don’t say anything. They were raised in that home. Their father hits their mother, and when they get married they get hit. They see it as normal.”

According to the Pan American Health Organization, physical violence within domestic abuse – as opposed to emotional, sexual or verbal violence – is “used much more frequently on women with fewer economic resources” in Peru.

According to the World Health Organization, the lifetime prevalence of physical violence by an intimate partner is 50% in urban areas of the country, as opposed to 62% in rural areas. And there, more than other countries, domestic violence often becomes fatal.

According to the Peruvian publication La Republica, there have been 356 feminicidios, or ‘women-icides’ in the country within the last 4 years, with an additional 174 attempted feminicidios. What’s more, judges have been markedly lenient in their punishments for perpetrators, with almost half receiving less than 15 years in prison, and two receiving less than seven – that is, if they end up being convicted, which only 84 were.

After staring over periodically at Yolanda while she spoke, and visibly reacting to one of Yolanda’s answers, Cecilia became willing to speak. When asked if she knew any stories of domestic violence, she stared down into her lap for a long silence, then nodded.

She proceeded to describe in detail the situation of a ‘relative’ who happened to be the same age as herself – twenty-nine.

“She got engaged to this man … He is always telling her that he loves her, and that he wants her, all the time right?” Cecilia said. “And always saying how much he loves her, and how he’s willing to give her everything, right? But in reality, I can see that it is not good.

“When he tells her that he needs her, she’ll go and be with him. But she is alone. He says that he loves her so much, and that’s why he doesn’t want her to work. He says she should only dedicate herself to her child. She has a daughter, and because of that she can’t work.

“Every instant the phone rings to call her, he asks, ‘Where are you? What are you doing? Who are you with?’ And he’ll find her.”

She finished, “He forces her to stay with him. She tries to leave, but he’s there always, always behind her, listening and waiting for her. Whenever he sees her with someone, that’s when he starts to get angry. And that’s when he hits her. She has tried to get out, but he’s forcing her. Because right now she lives more in fear, out of fear that he’s going to kill her if she were to have another partner.”

Cecilia’s hesitancy to speak – whether or not she actually was talking about a “relative” – says leagues about her situation, and that of all the women facing the Machismo Culture in Peru. It’s difficult to grapple with an issue that is in many ways tied into the larger economic, political and historical storylines that have resulted in the perseverance of a rural, anachronistic culture.

The education they are receiving at classes like the one taught at the women’s center is a necessary start – but only if paired with empowerment, so that women like Cecilia can know that they don’t have to be afraid to tell their stories.