Geneva/Dubai, Oct 2 2017 - The Chairman of the Geneva Centre for Human Rights Advancement and Global Dialogue H. E. Dr. Hanif Al Qassim appealed to the world community to provide financial, technical and material assistance to Bangladesh and the UN in providing adequate housing and shelter to the approximately 700,000 Rohingyan refugees – entrenched in Bangladesh – after fleeing persecution and oppression in Myanmar. Al Qassim’s appeal came in the wake of the deplorable humanitarian situation unfolding in the region and on the occasion of the 2017 World Habitat Day. 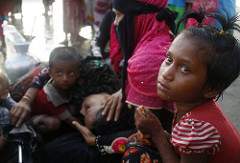 “The world community has a responsibility to provide support and assistance to neighbouring states providing refuge to the Rohingyans fleeing persecution, ethnic cleansing and maltreatment in Myanmar,” stated Dr. Al Qassim.

The Geneva Centre’s Chairman noted that the provision of adequate shelter to refugees “is stipulated in Article 21 of the Convention Relating to the Status of Refugees and in Article 18 of the Guiding Principles on Internal Displacement. International law guarantees the realization of the right to adequate shelter and housing to refugees in the context of forcible displacement of people.”

Dr. Al Qassim likewise echoed the views of the United Nations calling upon the government of Myanmar to allow for an international fact-finding mission to investigate the gravity of the human rights violations perpetrated against the Rohingyans by Burmese security forces in line with Resolution 34/22 – adopted on 24 March 2017 – by the UN Human Rights Council.

“Evidence from satellite images – as reported by international media – confirms that more than 200 villages have been pillaged and burned to the ground in a deliberate attempt to forcibly expel – once and for all – the Rohingyans from Myanmar.

“An international fact-finding mission must be given access to visit the Rakhine State and undertake an objective and impartial assessment of the gravity of human rights violations inflicted on the civilian population. Myanmar has a duty and an obligation – as a member State of the UN – to comply with the founding principles of the Charter of the UN to maintain international peace and security. Despite the fact that the Rohingyans have lived for centuries in Myanmar, their citizenship and even their basic human rights are being blatantly denied and violated,” added Dr. Al Qassim.

The Geneva Centre’s Chairman was also concerned about recent reports warning about the outbreak of diseases and hunger in refugee camps sheltering Rohingyans owing to lack of access to food, water and sanitation.

He said that “the deplorable situation of the Rohingyans could turn into a humanitarian tragedy if the world community continues to remaining silent about, or fails to fully address, the plight of the Rohingyan people. I call upon the world community to support the efforts of Bangladesh and the UN to ensure temporary refuge and protection to the Rohingyans and to assert their citizenship rights in, and their right to return to, Myanmar. We cannot turn a blind eye to the ethnic cleansing and the genocide and their ominous projections – as observed by the UN special advisor for the prevention of genocide Adama Dieng in September 2017 who said: ‘In fact it can be the precursor to all the egregious crimes – and I mean genocide’ – that is unfolding in Myanmar,” Dr. Al Qassim concluded in his statement.