“We Need to Be Strong” – Award Spotlights Courageous Journalists 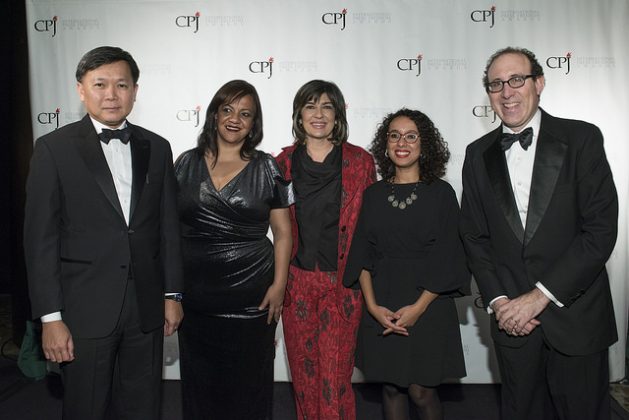 UNITED NATIONS, Dec 15 2017 (IPS) - As press freedom becomes increasingly limited, journalists are frequently finding themselves in more dangerous predicaments than ever before.

Every year, the Committee to Protect Journalists (CPJ) honors courageous journalists from around the world at the International Press Freedom Awards.

“Journalists around the world face growing threats and pressure,” said CPJ Executive Director Joel Simon. “Those we honor are the most courageous and committed. They stand as an example that journalism matters.”

Among the awardees is award-winning Yemeni reporter and blogger Afrah Nasser, who noted that being a journalist in Yemen is like walking through a minefield.

Reporters Without Borders (RSF) found that the Houthi rebel group is the second biggest abductor of journalists following the Islamic State. When they are not victims of air strikes by the Saudi-led coalition, journalists are constantly at risk of detention, forced disappear-ance and assassination.

“I was getting death threats – even subjected to my family – and I was also getting pressure from my family out of protection and love not to write,” Nasser told IPS.

In 2011, as the uprising began in Yemen, Nasser started writing about human rights viola-tions and gender issues in the country, which were soon followed by death threats due to her critical coverage of the regime.

She became a political refugee in Sweden later that year where she now lives and continues to report on Yemen.

“I always believed in the strong power of stories… Freedom of expression is a very vital tool for any community to bring change,” Nasser said.

Though women are often expected to talk about soft topics, Nasser said that she had to express herself.

“I’m not a male, white, Western journalist writing about Yemen…I thought that nobody would take me seriously,” she told IPS about her reaction to CPJ’s award.

But she took the opportunity to highlight the plight of Yemenis and call for international action.

“Being here is not to represent Yemeni journalists only but all Yemenis who feel abandoned by world leaders and international media that are not covering their suffering sufficiently…let’s make sure international media are on the right side of history,” Nasser told attendees.

Like Nasser, Patricia Mayorga also had to seek protection after her colleague was killed in the northwestern state of Chihuahua.

Miroslava Breach Velducea, who covered politics and crime in Chihuahua, was shot eight times in March. A note was found at the crime scene which read, “For being a snitch.”

Mayorga worked alongside her, reporting on the links between politics, corruption, and organized crime. After publishing a story about political candidates ties to organized crime, both Mayorga and Velducea began receiving threats.

“In this moment, I don’t feel fear. I felt courage that I wanted to shout there needs to be justice. But at the same time, you feel like you are living under anesthesia and you have to sort of give yourself up to the experts…because everything got worse,” she told IPS.

Soon after Velducea was killed, Mayorga sought refuge in Peru.

She noted that organized crime was not the only issue for journalists, but also the government’s campaign to silence media on reporting on the reality on the ground.

“When reporters start to question the government, the government starts using surveillance against them. They do campaigns to discredit and criminalize them,” Mayorga said.

“Press freedom isn’t just for journalists, it’s for the people,” she continued.

Mexico continues to be the Western Hemisphere’s deadliest country for the media. An estimated 100 journalists have been murdered since 2000.

“Two months before they killed her in the state of Chihuahua, Mexico, Miroslava Breach and I asked ourselves why we kept going. She refused to be complicit, and I refused to betray the people who had put their trust and final hope in journalism,” Mayorga told attendees.