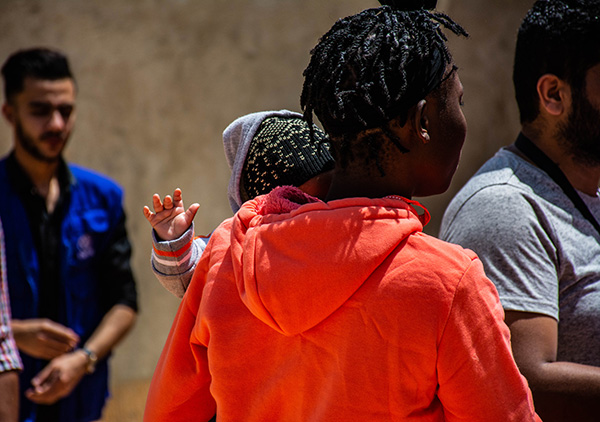 A migrant mother and child get ready to board IOM's first VHR charter from Zintan, Libya. Credit: IOM 2018

GENEVA, Aug 10 2018 - Between January and July 2018, IOM, the UN Migration Agency, safely returned 10,950 stranded migrants from Libya through its Voluntary Humanitarian Return (VHR) Programme as the number of detainees in the country rose alarmingly. The majority of the migrants, 9,636, returned home to countries in Central and West Africa on IOM charter flights. A group of 325 people returned to East Africa and the Horn of Africa, and the remainder to North Africa and Asia.

IOM charter flights are coordinated in cooperation with the Libyan authorities, embassies and consulates in countries of return along with IOM country offices and other international organizations. In addition, IOM has assisted a total of 1,314 migrants to return home from Libya on commercial flights in 2018 so far.

Many migrants from Libya often opt to return home after arriving in Niger by land, from where IOM organizes their onward transportation to their countries of origin. In 2018 (January–July), IOM returned 2,175 migrants from Niger to their homes (1,443 by charters and 732 by commercial airlines).

The VHR programme was launched in 2016 as part of the EU-IOM Joint Initiative on Migrant Protection and Reintegration with funding from the European Union Emergency Trust Fund for Africa (EUTF) in Libya and other countries in Africa. With a high demand among migrants to return home, IOM scaled up its efforts to assist migrants including the expansion of reception centres, reintegration activities and community-based support to returnees and victims of trafficking.

In April 2018, IOM identified 179,400 internally displaced persons (IDPs) along with 690,351 migrants within the country. Despite the current circumstances, Libya continues to be the main transit and destination point for migrants looking to a better life in Europe. Access the latest IOM Displacement Tracking Matrix (DTM) figures for Libya here.

IOM reports that the total number of migrants and refugees that entered Europe by the Mediterranean Sea is 60,309 since the start of 2018 through (8 August). This figure is about half of the 117,988 arrivals in 2017 at this time last year. The cause of the number of arrivals decreasing is largely due to a series of measures that have been adopted by EU Member States since late 2016, including the closure of the migratory route across the Mediterranean.

In 2018, the coordination of rescue operations was handed over to the Libyan Coast Guard from the Italian Coast Guard.

For latest arrivals and fatalities in the Mediterranean, please visit: http://migration.iom.int/europe