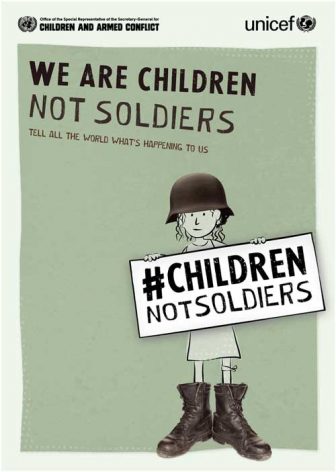 UNITED NATIONS, Aug 6 2019 (IPS) - More than 24,000 violations have been committed against children across the globe, including recruitment into armed forces, abduction, sexual violence, deprivation of basic needs, attacks on schools and hospitals– and even murder.

To tackle this, Canada has launched a set of 17 principles focusing on child protection in peacekeeping, incorporating all stages of a conflict.

“These principles are motivated by an understanding that preventing the use and recruitment of child soldiers is not peripheral to UN peacekeeping, but rather it is critical to achieving overall mission success and setting the conditions for lasting peace,”
said Richard Arbeiter, Ambassador and Deputy Permanent Representative of Canada to the United Nations.

He was speaking at an event last week, organized by the Permanent Mission of Canada, and included guest speakers from Watchlist, the United Nations Children’s Fund (UNICEF), the Canadian Defense Academy (CDA), and the Department of Peace Operations (DPO).

“In June, Canada’s Minister of National Defence announced the establishment of the Roméo Dallaire Centre of Excellence for Peace and Security, within the Canadian Defence Academy,” Dr. Simon Collard- Wexler, First Secretary, Political Affairs, at the Permanent Mission of Canada to the United Nations, told IPS.

The Centre’s initial focus, he said, “will be to support our forces’ implementation of the Vancouver Principles”.

Canada will also be providing the Roméo Dallaire Child Soldiers Initiative with a contribution of over $1 million over five years “to conduct research and identify lessons learned and best practices regarding the prevention of the recruitment and use of child soldiers.”

Over 40% of the worlds armed forces use children and are known to be fighting in at least 14 countries around the world. Children are vulnerable because they are easier to manipulate than adults, do not require pay, and their cognitive sense of danger is low.
They also might become soldiers due to societal pressure and are led to believe that volunteering will provide security.

When asked what role Watchlist will have, going forward, Lapar told IPS: “Watchlist on Children and Armed Conflict, which represents a network of nongovernmental organizations (NGOs), will continue to push governments and the United Nations to improve programs and policies to protect children in armed conflict.”

“We would like to see more governments endorse the Vancouver Principles, along with the Paris Principles and Commitments and the Safe Schools Declaration, as a mutually enforcing package of commitments to protect the rights of children in war,” she added, but noted that “commitments mean nothing until they are put into practice”.

“For that, we urge governments to integrate these principles into their military doctrine, trainings, and operating procedures. They need to ensure accountability of their forces for any violations of children’s rights; this includes investigating any allegations of sexual exploitation and abuse by peacekeepers, holding those responsible to account, and providing reparations and support services to survivors.”

So far, over 89 countries have endorsed the Vancouver principles. With that in mind, peacekeeping workers need to be equipped and trained appropriately as well.

“Peacekeepers have an important role in ending and preventing child recruitment, as well as other grave violations against children in armed conflict” Lapar said at the panel discussion, adding that “often times, they may be the first to identify children associated with armed forces or those at risk of being recruited.”

Thus, peacekeeping forces are extremely beneficial, coupled with the principles. However, to do that, Lapar noted “they need to mandate directives and appropriate training to do so effectively.”

She pointed out that the Vancouver principles illustrate this very sentiment. However, there are other tools than can be used to help combat child recruitment.

“The first Vancouver principle highlights the importance of integrating child protection provisions including the prevention of child recruitment into all peacekeeping mandates.” Lapar stated.

“By clearly articulating appropriate child protection tasks into peacekeeping mandates, the security council can bolster the protection of the children and enable efforts to end and prevent recruitment and other grave violations,” she elaborated.

She pointed out Principle 15 which examines the use of sanctions against those that use and recruit children. That said, sanctions are a tricky maze to maneuver.

When asked about ensuring that the sanctions would harm the targeted parties and not the civilians, Lapar said: “I want to reiterate that sanctions are just one of many tools available to the Security Council and UN Member States, to put pressure on perpetrators who commit child rights violations and to deter future violators.”

“They should be used as a last resort, after other measures have failed, and carefully considered, with attention to the context and potential impacts on civilian populations, to avoid causing greater harm,” she added, pointing out that “there are a number of Security Council sanctions regimes in place already, but only some of these include among their designation criteria grave violations against children, including the recruitment and use of children, targeting children, and attacks on schools and hospitals.”

“And yet we need to do more as children continue to be excluded from most peace discussions around the world,” Lapar pointed out.

Indeed, as since 2016, children have been used in hostilities by both armed and non-armed groups in at least 18 conflicts, and 27 countries operating “military schools, where children, as young as 15 are deemed members of the armed forces and thus are compelled to enlist upon graduation.

“Children should be protected and never recruited and used in war,” Lapar concluded.