NEW YORK, Dec 23 2019 (IPS) - “When I think about Bangladesh, I think about everybody. Not everybody is enjoying Rabindranath and the great literature and culture that Bangladesh has. But I think everybody has got the right to have this experience”, deeply felt by late Sir Fazle Hasan Abed, founder of BRAC (Building Resources Across Communities), a unique, integrated development organization that many have hailed as the most effective anti-poverty organization in the world; who passed away December 20, 2019at the age of 83. 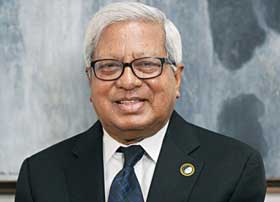 Sir Fazle, who was knighted by the British Crown in 2009, grew BRAC into the world’s largest non-governmental organization. BRAC has provided the opportunity for nearly 150 million people worldwide to improve their lives, have enhanced food security and follow a pathway out of poverty. The scale and impact of BRAC’s work in Bangladesh and ten other countries is unprecedented.

He pioneered a new approach to development that has effectively and sustainably addressed the interconnectedness between hunger and poverty. In this regard, Sir Fazle broke new ground by melding scalable development models, scientific innovation, and local participation to confront the complex causes of poverty, hunger and powerlessness among the poor.

Sir Fazle was honored with scores of awards in his lifetime for his significant contributions in developing world; he was named as 2015 World Food Prize Laureate for his unparalleled achievements in building BRAC.

United Nations Children’s Fund (UNICEF) Executive Director Henrietta H Fore expressed his condolence, “All of us at UNICEF will miss his ideas and advice. We will never forget the example he set”.

Sir Fazle, founded numerous projects, including health, agriculture, and education with a vision to pull the poor out of poverty in every way. “Everything we did in Bangladesh we did with one focus: getting poor people out of poverty because we feel that poverty is dehumanising”, Sir Fazle had said to The Guardian.

For anyone growing up in Bangladesh, BRAC is a common name, almost every village kid you will meet inevitably goes to BRAC schools. BRAC’s Early Childhood Development (ECD) and Centre for Play programmes are designed to provide learning opportunities to children, especially in the early years. The play-based programmes are designed for refugee/displaced children who need help to recover from trauma. BRAC’s pre and primary schools have more than 12 million children graduated.

Dr. Muhammad Yunus, noble prize laureate, Chairman of Yunus Center noted in his tribute to Sir Fazle that how his contributions have positively touched almost everyone growing up or living in Bangladesh – “It is certainly not an exaggeration to say that there is hardly anyone among the 170 million people of Bangladesh who do not benefit in some way from Abed’s programs or enjoy products and services provided by his organizations. If she is a poor person or a village woman, then she is in contact with Abed’s activities at every step of her life – In education, health, income generation, self-Awareness and many more”.

Sir Fazle believed in gender equality, women empowerment and their role in poverty alleviation; in 1978, BRAC established ‘Aarong’, one of the biggest ethical lifestyle retail chains in the country,primarily by engaging rural artisan women who producedhandcrafts aiming at pulling them out of poverty. Today, ‘Aarong’ supports approximately 65,000 artisans impacting lives of more than 325,000 people through ‘Ayesha Abed Foundation’ and 850 entrepreneurs with fair terms of trade; giving them access to BRAC’s holistic support including mental health care, hygiene awareness and subsidized latrines, micro credit, legal aid, day care and education for their children.

Melinda Gates, co-founder of Bill and Melinda Gates Foundation, recalled Sir Fazle’s contribution in her message saying, “We were saddened to hear of his passing and will forever draw inspiration from his work, as will the rest of the world, which he left so much better than he found”.

Nobel Prize-awarded couple Abhijit Banerjee and Esther Duflo, in their message, said, “How often do we see people like Sir Fazle Hasan Abed? His absence has left a great sense of loss in all of us”.

BRAC has distributed USD 1.5 billion in micro loans as one of many of its projects to help the poorest people in Bangladesh graduate out of extreme poverty. In order to make micro finance sustainable for the poorest, BRAC built an effective business model around micro financing which included grants known as transfer of assets which could be a cow or half a dozen of goats, or any resources that would generate an income for them; a stipend system until they start earning income utilizing the resources, and one on one counselling sessions which taught them strategies on how to best use the loans and resources to maintain sustainable flow of income and build a habit of saving money.

Former World Bank President Jim Yong Kim said, “The scale and impact of what he has done, and yet the utter humility with which he has done everything, is a lesson for every single one of us.”

Another of many of his greatest initiatives was to combat the increasing child and infant mortality rate. During the 1980’s diarrheal diseases became one of the top reasons of the premature mortality of children under 5 years in Bangladesh. BRAC introduced home-made oral saline to the mothers through various campaigning, and started immunization program for infants in village, which were revolutionary steps decreasing the rate of child death. “We went to every household in Bangladesh teaching mothers how to make oral rehydration fluid at home to combat diarrheal deaths”, the pioneer recalled as stated by The Guardian.

WHO Director General Tedros Adhanom Ghebreyesus said Sir Fazle Abed’s passion and work in alleviating poverty and empowering the poor inspired many. “My thoughts are with him and his family and friends,” he added.

BRAC now has extended its operations in 14 more countries, touching the lives of many more helpless people globally.

“His nearly 50 years of visionary leadership at BRACtransformed millions of lives in Bangladesh and beyond and changed the way the world thinks about development. Driven by an unwavering belief in the inherent dignity of all people, he empowered those in extreme poverty to build better futures for themselves and their families”, said former US President Bill Clinton in remembrance of Sir Fazle.

There are just a handful of people who change the world and impact millions of lives, Sir Fazle Hasan Abed was one of them who will continue to live on globally through his remarkable contributions. Dr. Yunus has articulated it perfectly, “Abed has left behind a confident Bangladesh. The story of his immense courage, self-confidence, and creativity will continue to inspire all generations to come. Abed will live as an icon of Bangladesh for posterity”.