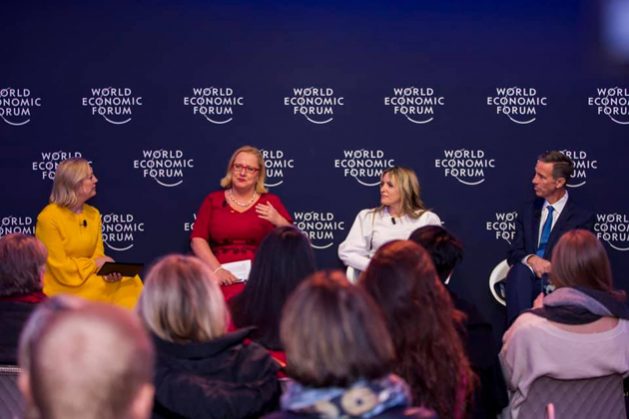 NEW YORK, Feb 15 2020 (IPS) - In a recent report by World Economic Forum (WEF) shows women suffer a “triple whammy” in the workplace. Without drastic action, gender parity will take more than a lifetime to achieve. This is the challenge that Katja Iversen, President and CEO of Women Deliver is staring down.

“We know that achieving gender equality is not a women’s issue. It is a societal issue. To be successful … boys and men must be involved at all levels and all ages,” said Iversen.

Iversen’s involvement WEF 2020 annual meeting in Davos increased the spotlight on gender equality. She was involved in a myriad of discussions, conversations, panel debates, midnight huddles and a social media drive. As the woman who heads leading global advocate for gender equality, health and rights of girls and women her role at the annual forum was clear cut.

“We provoked discussions using our ‘gender lens’ – a small magnifying glass. We gave this to leaders and influencers to bring down the mountain and apply to their businesses, governments, and lives,” Iversen said in an exclusive interview with IPS.

“Along with our partners, Promundo and Unilever/Dove Men+Care, we released a series of recommendations on male engagement in gender equality, condensed in a catchy infographic.”

Iversen went on to emphasise how “everybody – including the men and women in Davos – must apply a gender lens to every aspect of life, from leadership, to health systems, to schools, the workplace, and at home. That is an important step to change systems, to change harmful norms, and drive progress.”

This may seem a momentous task. The WEF report, released in December 2019, highlighted the factors that fuel the economic gender gap. This included a noticeably low level of women in leadership positions, wage stagnation, labour force participation and income.

The report highlights what it terms a ‘Triple Whammy’ for women in the workplace. Women, the report said, are highly represented in many of the roles that have been hit hardest by automation.

Moreover, not enough women are entering technology-driven professions where wage growth is more profound. This puts women into the middle to low wage categories that have been stagnant since the financial crisis in 2009.

Thirdly, a lack of access to capital prevents them from pursuing entrepreneurial activities, another key driver for income.

WEF aims to close the gender gap by setting up coalitions between relevant ministries and the largest employers to increase female labour force participation, increase women in leadership positions, close wage gaps and prepare women for jobs of the future. Additionally, the global business commitment on Hardwiring Gender Parity in the Future of Work mobilises businesses to commit to hiring 50% women for their five highest growth roles between now and 2022.

Iversen said women must be involved in the development and growth of Artificial Intelligence (AI) and ubiquitous digital technology for them to benefit.

“We know that innovation and technology hold a lot of power and can be used for good – but only if it works for girls and women and identifies the bias that holds them back,” she said.

While there was potential for digital technologies, like AI, to unlock better health access and information, new employment and leadership opportunities, and greater economic security for women – it could “just as likely leave big parts of the population behind and exacerbate existing inequalities”.

This was why the gender lens in the development and implementation of AI and other tech solutions is so critical, said Iversen. Having women involved in the growth of digital technology “can ensure technology is more representative and can eliminate unconscious bias in hiring, promotion, and recruitment”.

It is critical that women’s education, especially in the field of technology, is enhanced, enabling them to participate in future workforce equally.

“We also need to make sure we are investing in women’s lifelong education and training, particularly in science, technology, engineering, and math. It is key to their professional and financial security in the workforce of tomorrow.”

Investment in women and their participation in the economy has a ripple effect.

“Evidence and common sense confirm that when leadership and the workforce represent the population and include women, it leads to better economic, social, and political cohesion and puts us on a better, more sustainable path.”

The Secretary-General of the United Nations, António Guterres, noted in his speech at WEF 2020 that while problems were global, the responses were fragmented.

“If I had to select one sentence to describe the state of the world, I would say we are in a world in which global challenges are more and more integrated, and the responses are more and more fragmented, and if this is not reversed, it’s a recipe for disaster,” he warned.

Iversen explains that by putting the gender lens at the centre of the solutions, it would enhance society’s ability to achieve its Sustainable Development Goals. It would also mitigate the ‘fragmented responses’ to global challenges.

“Gender is cross-cutting, it is essential to progress and to achieving the Sustainable Development Goals. Conservation of our planet; eradicating poverty and ensuring health; education; peace, and prosperity for all need to be integrated. This requires putting a gender lens to the entire development agenda,” Iversen said.

“One of the reasons the world is facing so many challenges right now, including trade wars, conflict, climate change, and growing inequality, is that girls, women, and marginalised groups are prevented from accessing power, both political and financial. Big egos, narrow interests, and profit over people and planet have been, mistakenly, prioritised, and we are paying the price for that.”

Women Deliver’s President was emphatic that “development actors from across the spectrum must abandon siloed approaches. It was essential to work together to drive progress for the people and planet, including girls and women, both through financial investment and multi-sector partnerships.”

Iversen is confident. WEF was “good start to the Decade of Action for the Global Goals and the 2020 Generation Equality push, demanding women’s equal participation in political life and decision-making in all areas of life.”

Involving the younger generation was also paramount to achieving the Sustainable Development Goals.

“What was also clear coming down the Davos mountain is that any efforts to push the development agenda over the finish line will fail if they don’t involve young people. Because youth not only have a stake in reaching our ambitious development goals by 2030, they are also well-suited to identify solutions right now.”

To address and improve gender equality, Iversen emphasised that it required a global effort. The private sector has a vested interest and a significant role to play in advancing gender equality. “We want governments and business leaders to use the gender lens in all they do. They should complete a concrete analysis of what progress they have made and what gender gaps remain,” Iversen said.

Both should ask themselves: What policies and procedures are inhibiting or promoting progress? What gender norms are prevalent and need to be addressed? What investments in gender equality could be made?

“And once that analysis is complete – get to work!”

Women Deliver has been relentless in that message and in bringing the evidence to bear with great partners. “And in recent years we have seen that the world – including at WEF – has started to catch on. Our challenge now is to move from talking to mobilising dedicated action.”

Women Deliver continues to be serious advocates, speaking up for girls and women in every setting.

“We’ll continue to advise committees for big corporations and international agencies. We’ll continue to elevate the voices of young advocates and local organisations around the world. We will continue to push back on the pushback to protect our gains and drive further progress,” Iversen said.

“We will continue to communicate from podiums, in boardrooms and hallways of major summits, on the pages of major newspapers, on (television) screens and social media – with the clear message: In a gender-equal world, everybody wins.”

IPS asked about the trend of women participating as policy-makers at WEF. Just how prominent is women’s role? Iversen replied that “24% of the 2,700 formal WEF participants were women. While that is an improvement from previous years, it’s still way too small. WEF has pledged to double female participation by 2030, and we are ready to help to speed it up.”

“We have a long way to go, but I saw progress at WEF,” said Iversen, adding, “More and new world leaders – in business and government – are picking up the gender lens. There is still so much to be done, and progress is slow for an impatient optimist like myself. But I came down the Davos mountain more hopeful than I went up, and more ready than ever to power progress for girls, women and gender equality in the Super Year ahead.”

Iversen remains optimistic. “Ultimately, we want to work ourselves out of a job. Then sit back and see a world where gender inequality is a thing of the past, where it is something people make fun of like the ‘old days’. Where people say, ‘I can’t believe we didn’t do this sooner’.”