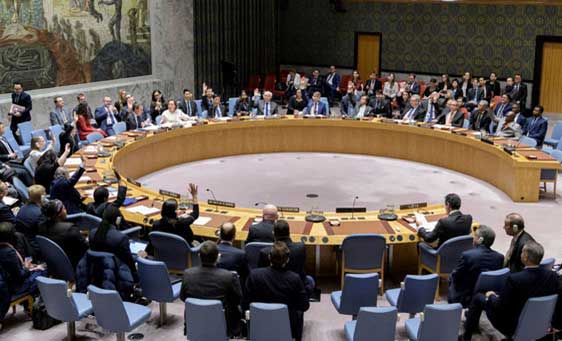 UNITED NATIONS, Jul 1 2020 (IPS) - The ongoing battle between China and the United States is threatening to paralyze the most powerful body at the United Nations – the 15-member Security Council (UNSC)—which has virtually gone MIA (missing in action) on some of the key politically-sensitive issues of the day.

The Council has scrupulously avoided any resolutions on the devastation caused by the COVID-19 pandemic, which has claimed the lives of over 500,000 people worldwide, while it has remained silent on Secretary-General Antonio Guterres’ call for a global cease-fire in war-ravaged countries, including Syria, Afghanistan, Iraq, Libya, Somalia and Yemen.

The warring parties in current conflicts are backed, directly or indirectly, by the five permanent members (P5) of the UNSC: the US, UK, France, Russia and China who are providing either political or military support– or both.

The big powers have a longstanding tradition of protecting their allies and their own national interests while covering up each other’s military sins — mostly on a reciprocal basis.

As the old saying goes, one Asian diplomat remarked, “the underlying principle is: You scratch my back and I’ll scratch yours”.

Ian Williams, a veteran journalist who has covered the UN since the 1980s and currently president of the New York Foreign Press Association, told IPS it is past time for the grown-ups in the UN to get together to call out the UN P5, especially the recidivist veto-brandishers like the US, China and Russia.

Even the Trump administration is not impervious to rebuffs, he added.

“I seem to remember when the People’s Republic of China (PRC) was going to veto a peacekeeping mission in Haiti over its recognition of Taiwan, until Ambassador Juan Somavia (of Chile) spoke to them on behalf of the LATAM members and warned of the consequences to their reputations. The consequences do not have to be critical – they can be cumulative since even the P5 need support.”

This Secretary General exceeds the quota on diplomacy, said Williams, author of “UNtold: The Real Story of the United Nations in Peace and War.”

“Perhaps he should abandon any ambitions for a second term and, while he still has it, use his moral authority as custodian of the Charter to name and shame those who hold up crucial decision for national ego”.

“He has the pulpit: he should try preaching and rallying other members. Better to be a memorable one termer than a footnote two-termer!”, said Williams, a former President of the UN Correspondents’ Association (UNCA).

The Trump administration broke ranks and blocked consideration of a proposed resolution on COVID19– because it did not specifically single out China by name. If such a resolution came up before the Council, the Chinese would obviously have vetoed it.

At the same time, no Security Council member would dare introduce a resolution supporting pro-democracy protests in Hong Kong, criticize the brutal suppression of Uighurs Muslims in China or condemn Israel for threatening to annex Palestinian territory.

And some of the instruments that do have teeth, he explained, “show little or no appetite to bite, as has recently been the case with the difficulties faced by the Security Council.”

Stephen Zunes, Professor of Politics at the University of San Francisco and coordinator of the program in Middle Eastern Studies, told IPS since the founding of the United Nations, one or more of the five permanent members have periodically abused their veto power or threat thereof to block action on important matters.

“Calls for reforming the Security Council, such as requiring a super-majority of some kind rather than a consensus of the P5 have been proposed, but largely ignored, for almost as long,” he said.

Zunes pointed out that the current U.S. administration is particularly extreme in its efforts to thwart the will of international community, however.

For example, he argued, the strongly pro-Israel administrations of Lyndon Johnson and Richard Nixon did not oppose a series of UNSC resolutions against Israel’s annexation of greater East Jerusalem.

And the strongly pro-Israel Reagan administration supported the unanimous resolution opposing Syria’s annexation of the Golan Heights, yet the Trump administration is blocking any action in opposition to Israel’s plans of annexing large swathes of the occupied West Bank, declared Zunes

“When the United States is willing to block action on fighting a global pandemic, establishing a global cease fire, or opposing the flagrantly illegal annexation of territories seized by military force, we really are entering a new era of political extremism which is not only weakening the Security Council, but threatening the viability of the of the entire UN system and post-World War II international order,” said Zunes, who also serves as a senior policy analyst for Foreign Policy in Focus project of the Institute for Policy Studies.

In a statement released June 30, US Ambassador Kelly Craft lambasted China’s gross human rights abuses but stopped short of taking any action in the Security Council.

In a hard-hitting statement she said the world has known about the Chinese Communist Party’s gross and systematic abuses of human rights for decades, but too often turned a blind eye.

“I salute the United Nations special rapporteurs and human rights experts for courageously breaking this silence and standing up for the Chinese people.”

She said the June 26 statement issued by UN rapporteurs and experts reveals the true state of human rights in the People’s Republic of China. It outlines the CCP’s systematic repression of religious and ethnic minorities; the disappearance and detention of lawyers and human rights defenders; and the regime’s use of forced labor.

While the UNSC has taken no action on the proposed annexation of occupied territory by Israel, the outspoken UN High Commissioner for Human Rights Michelle Bachelet added her voice to the growing international and national calls on the Government of Israel not to proceed with its plans to illegally annex a swathe of occupied Palestinian territory, saying it would have a disastrous impact on human rights of Palestinians and across the region.

“Annexation is illegal. Period,” she said. “Any annexation. Whether it is 30 percent of the West Bank, or 5 percent. I urge Israel to listen to its own former senior officials and generals, as well as to the multitude of voices around the world, warning it not to proceed along this dangerous path.”