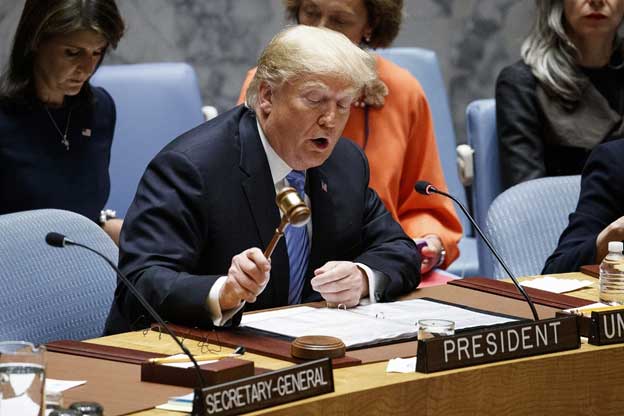 US President Donald Trump at a meeting of the Security Council. Credit: United Nations

UNITED NATIONS, Jan 8 2021 (IPS) - The storming of Capitol Hill in Washington DC by an unruly mob is reminiscent of an insurrection in a “banana republic” –as hilariously portrayed in the 1971 Woody Allen comedy “Bananas” spoofing a revolt in a fictional Latin American country.

But judged by the disastrous four-year administration of President Trump such a description is an insult to all banana republics.

For long, America has been the world’s self-appointed cop ousting dictatorships and overthrowing authoritarian regimes (read: Iraq, Libya and Afghanistan), upholding human rights and preaching peace – even while selling millions of dollars in weapons to conflict-ridden countries.

As the New York Times pointed out what unfolded in Washington DC, however, was “one of the most severe intrusions of the Capitol” since the British invasion during the war of 1812 when it was burnt down.

Senator Mitt Romney, a Republican who was a longtime critic of Trump inside the bowels of his own political party, expressed his denunciation in a single sentence: “What happened here today was an insurrection incited by the President of the United States.”

As Cable News Network (CNN) pointed out, a growing number of Republican leaders and Cabinet officials believe Trump should be removed from office before President-elect Joe Biden’s January 20 inauguration, even if it means invoking the 25th Amendment or disqualifying Trump from ever holding office again.

The 25th Amendment to the US constitution provides procedures for replacing a president or vice president in the event of death, removal, resignation or incapacitation.

Stephen Zunes, Professor of Politics at the University of San Francisco, told IPS the shocking spectacle from the mob attack on the seat of American government with the apparent encouragement of the president, along with efforts by some Republican members of Congress to block the certification of the Electoral College, demonstrates that a significant faction of the conservative movement in the United States has become explicitly anti-democratic.

“While Wednesday’s events will likely backfire politically, it serves a warning that there are real authoritarian tendencies in this country led by people who are willing to use violence to seize power.”

Despite clear signs that there would be a serious attempt to storm the Capitol, security was minimal and the Capitol Police were quickly overrun, he added.

This contrasts with the massive and intimidating troop presence around the Capitol and other government buildings during the largely nonviolent protests for racial justice this past spring despite the absence of any such realistic threats.

This raises serious issues regarding racism and ideological biases in policy and related security measures in Washington, said Zunes.

He pointed out that the shock and dismay around Trump’s support for a de facto coup and his overall authoritarian tendencies are well-founded.

“At the same time, it must be acknowledged that presidential administrations and Congressional leaders of both parties have long supported autocratic regimes and occupation armies elsewhere through arms transfers and other security assistance. Indeed, the United States is the world’s number one backer of such anti-democratic governments”.

Support for democracy, he argued, must not stop at the water’s edge. “If Americans are serious about defending democratic institutions, we must apply such principles to our foreign policy as well.”

The demonstrators on Capitol Hill have been described mostly as right-wing extremists and white supremacists who are ardent supporters of Trump. At least four died in the melee.

Meanwhile, some of the US allies in Europe, including France, Germany and UK have expressed shock and revulsion at the insurrection in one of the world’s “model democracies”.

Dr. Alon Ben-Meir, professor of international relations at the Center for Global Affairs at New York University (NYU), told IPS that Wednesday, January 6, is a day that will live on in infamy; a day in which the president of the United States incited a mob to storm the nation’s capital, in which Trump perpetuated lies and falsehoods about the election to justify his betrayal of the country, the Constitution, his office, and the very foundations of this democratic republic.

He said the world watched in horror as the far-right mob managed to breach security and enter the Capitol building successfully. Clearly, the violent protestors were not repelled with adequate force or they would never had made their way in.

“Had the mob consisted of left-wing agitators instead, of black and brown bodies rather than white bodies, the news would be quite different — indeed, it is more than likely that had that been the case, the protesters would never had made it inside at all, let alone allowed to remain there for over four hours”.

What is perhaps most disgraceful, over and above Trump’s cynical and self-serving incitement, is his silence while the mob roamed through the Capitol, while senators and representatives hid themselves away until it was safe to return to complete the business of the day, said Ben-Meir.

“When he finally did make a statement, it was anything but a full-throated condemnation of the chaos and violence that had consumed the nation’s temple of democracy. Rather he told the rioters to return home, and added “We love you” – after reiterating his false claim that the election was stolen”.

In a word, said Ben-Meir, Trump sought to justify the insurrectionists, and the reason for that is plain: he wants to sow as much violence and discord as he possibly can between now and the inauguration.

That way he can point to the civil unrest and say “see, that is what happens when you steal an election.” Never mind that it has only been Trump and his fringe followers who have sought to steal an election, and to the credit of this still great nation, failed completely and utterly, he declared.

UN Spokesman Stephane Dujarric said the Secretary-General “is saddened by the events at the US Capitol in Washington, D.C., on Wednesday.”

In such circumstances, he said, “it is important that political leaders impress on their followers the need to refrain from violence, as well as to respect democratic processes and the rule of law. “

In a statement from Geneva, UN Human Rights Commissioner Michelle Bachelet said: “We are deeply troubled by Wednesday’s attack on the US Capitol, which demonstrated clearly the destructive impact of sustained, deliberate distortion of facts, and incitement to violence and hatred by political leaders”.

She said allegations of electoral fraud have been invoked to try to undermine the right to political participation. We are encouraged to see that the process has continued in spite of serious attempts to disrupt it.

“We call on leaders from across the political spectrum, including the President of the United States, to disavow false and dangerous narratives, and encourage their supporters to do so as well,” she added.

“We note with dismay the serious threats and destruction of property faced by media professionals yesterday. We support calls from many quarters for a thorough investigation into Wednesday’s events,” declared Bachelet

In a summing up, Ben-Meir said Trump used the power of his office to dismantle everything that President Obama has achieved, and he stopped short of nothing to delegitimize President-elect Biden’s victory.

“All I can say is eat your heart out, Mr. Trump. Obama left the presidency after serving two terms with honor and dignity and with the Nobel Peace Prize under his belt. And Trump will leave his office as an impeached one-term president who will live in infamy.”

The Democratic leadership, with the few Republicans who stood for the rule of law and did not submit to Trump’s whims, should immediately push for either impeachment or the invocation of the 25th Amendment to oust Trump from his office and bar him from ever holding a formal position again, he declared.