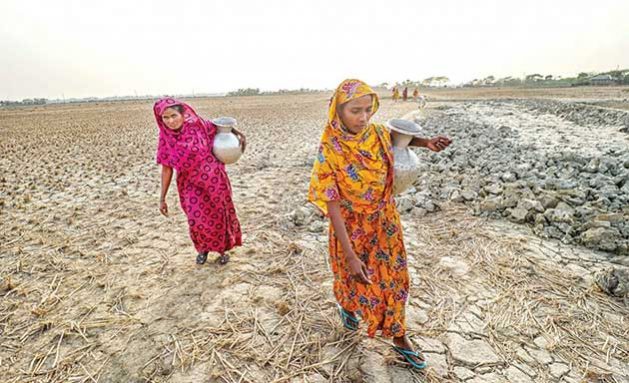 Mar 22 2021 - Roksana Khatun moves aside dirt and floating leaves from a pond, slowly lowers her earthen pitcher into it and fills it with around 20 litres of water. Collecting the water, she carefully climbs the muddy, steep stairs of the pond and walks around 45 minutes to return home. She holds the heavy pitcher against her waist or on her head the entire time.

Only to fetch water for her family, she does this arduous task every day, twice, throughout the year, except for a few months when it rains and she can store some drinking water, she told The Daily Star, while on her way home from the pond recently.

“I’ve a tubewell, but it does not work. I’ve no other option … I need water for my family of six. I’ve been doing this for years,” Roksana, aged over 50, said, wiping sweat off her face with her left hand.

Despite all these hard work, Roksana’s family, which lives in Madarbaria village of Khulna’s Koyra upazila, gets to drink saline water. Their consolation is the water of the pond is a bit less saline than what many others get.

Sushama Sarkar, 53, of Hatiardanga village of Koyra, travels to a pond, which is two kilometres away from her home. Carrying the heavy pitcher, she suffers from back pain frequently.

“Some buy water but we can’t afford it … It also hasn’t rained in the last several months,” she said.
A recent UNDP survey has highlighted the plight of the country’s coastal people regarding safe drinking water. It said 73 percent of the people living in five coastal upazilas — Koyra, Dacope, Paikgachha of Khulna and Assasuni and Shyamnagar of Satkhira — have to drink unsafe saline water.

In the dry season or winter, the salinity level of tubewell water in Shyamnagar goes up to 6,600mg per litre, more than six times the permissible limit.

The survey was carried out on 66,234 households of 271,464 people living in 39 unions of the five coastal upazilas, under a project, titled “Gender-responsive Coastal Adaptation (GCA)”.

The study, which ended in February, also found that 63 percent of the people face difficulties even in getting that water as they have no other source of drinking water.

Many spend more than two hours daily to collect drinking water. Sometimes, they need to go more than a kilometre to fetch the water, either from a tubewell or a pond.

People in more than 16 percent households surveyed said they have to walk even more.

Also people living there have to spend more than those in the capital for drinking water, the survey revealed.

It converted the time spent for fetching the water into monetary value based on the wages of the government programme of Kajer Binimoye Khaddo (Food for Work), and said when people spend one hour for the task, it actually costs them Tk 1,875 a month. If it is more than two hours, the cost rises to Tk 2,463.

On the contrary, Dhaka Wasa charges each household Tk 200 monthly for water.

Asked what interventions were required to improve the situation in the coastal area, Alamgir Hossain, coordinator of the survey project, funded by the Green Climate Fund and the Bangladesh government, said they support climate resilient drinking water supply through rainwater harvesting.

Replying to a query on the health impact caused by consuming the saline water, he said they would assess the impact at a later part of the project.

However, there has already been notable health impacts, including high blood pressure, skin diseases, indigestion, diarrhoea, he added.

As river water started to became saline nearly three decades ago, people living in these coastal upazilas mainly depend on ponds and tubewells for drinking water.

Many freshwater ponds were damaged at least four decades ago due to saltwater shrimp farming in some areas.

Due to cyclone Aila in 2009, many ponds became full of salt water. Most have remained so for even more than a decade. Cyclone Amphan caused a similar havoc.

Lately, salt water is being found in different tiers of the ground there, Alamgir added.

Pritish Mondal, an engineer of Public Health Engineering Department, said, “There is no shortage of water in the upazilas. But all the water is saline water,” he said.

Akmol Hosen, executive engineer of DPHE told The Daily Star that around 35 percent people of Khulna district get safe drinking water. Rest of them depend on ponds or other sources.

Shahidul Islam, the director of NGO Uttaran and a native of Sathkhira, said, “As you travel around the villages in most of the upazilas of the district, you will see there are many deep-tube wells that have been set up to ensure drinking water for the villagers, but they simply don’t work.”

Dilip Kumar Datta, professor of Khulna University, said the impact of brackish water has always been in the south-west of the country. Gradually, the salinity level is increasing in rivers, ponds and other water bodies, he said.

When asked how the salinity problem could be resolved, Ainun Nishat, Professor Emeritus of Brac university, said, “You need to build the Ganges barrage.

“It is also the number one project of the Bangladesh Delta Plan 2100. The government could build the Ganges barrage in collaboration with India.”

He also said, “As far as I know, India is very keen on supporting Bangladesh on this. Because India has realised that the Ganges barrage is very important to save the Sundarbans and the reduce salinity in this region.”