Will World Leaders Risk a UN Visit Amid a Surge in the Deadly Virus? 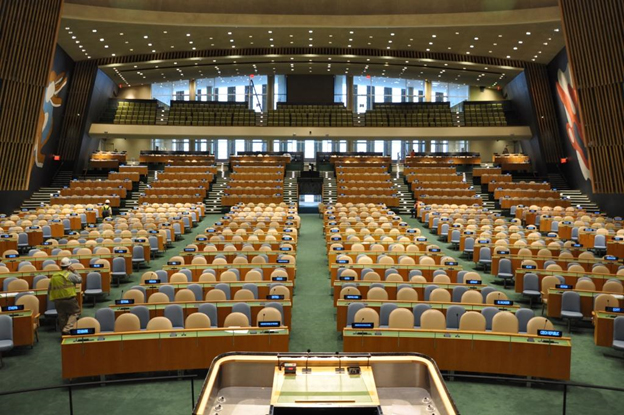 The absence of world leaders may be visible in a near-empty General Assembly Hall, come September. Credit: United Nations

Will it be in-person or via video conferencing? Or will it most likely be a hybrid session with a mix of the two options, as it was last year.

The uncertainty has been prompted by a fresh wave of the deadly Delta coronavirus variant which is threatening to either lock- down New York city—or undermine all plans to return to normalcy or near-normalcy.

Asked whether there is a list of world leaders who have decided to be at the session in-person, UN spokesperson Stephane Dujarric said on August 11: “The short answer is, I don’t have the list. … which is not to say the list doesn’t exist”

Pointing out the second wave of infections in the city, he said: “I think what we have to keep in mind is that the situation is extremely fluid with the Delta variant, and what plans and what people may announce now may very well change before 21 September”.

The plans may depend on what Member States decide to do at the last minute– given the situation in their own country, given the status of international travel and given what’s going on here, he said. “So, I think we just need to plan for the unexpected.”

Right now, he said, the format of the GA remains unchanged; “it’s what we had announced a few weeks ago, which is Member States will have the choice of either having an in person delivery of a speech or a video delivery of the speech”.

“I assume that a lot of plans will be made at the last minute because of the changing situation of the Delta variant in the four corners of the world… It is not for me to confirm the travel plans of a Head of State or Head of Government, especially this far out from the GA in a time where things are so volatile, in a sense, of what will happen”.

Health workers tend to patients in a temporary COVID-19 emergency ward, in New Delhi, India. Credit: UNICEF/Amarjeet Singh
Cases and deaths resulting from COVID-19 continue to climb worldwide, mostly fuelled by the highly transmissible Delta variant, which has spread to 132 countries, said the head of the World Health Organization (WHO) in July.

But several lingering questions remain: will world leaders, billed as speakers at the General Assembly sessions, be exempted from these restrictions?

And are these leaders willing to take risks visiting a country with more than 100,000 new coronavirus cases per day, reaching that mark for the first time since February?

The New York Times reported on August 10 that America’s borders remain closed to most European travelers during the pandemic, even those fully vaccinated. With fears of the Delta variant raging, there appears to be no end in sight.

But nearly two months later, even as Europe has overtaken the United States in vaccinations, America’s borders remain closed to most European travelers, even ones with vaccinations. And with fears of the Delta variant of the virus raging, there appears to be no end in sight.

According to the Times, the US decision to remain largely closed has dismayed Europeans
and frustrated their leaders, who are demanding that Europe’s decision to open its borders be reciprocated.

When asked for an update on the format for the high-level week, the General Assembly Spokesperson Amy Quantrill told reporters on July 27 that the letter of 23 June was the latest formal correspondence on this matter.

For unvaccinated people, she said, swiping their pass means that they have not had close contact with a person with COVID-19 in the last 10 days.

Meanwhile, the staff at the UN secretariat, which provides services, directly or indirectly, to the GA sessions is not in full force. Since early July, UN staffers, numbering over 3,000, have been given the option of either working from home or in-person.

Guy Candusso, a former First Vice President of the UN Staff Union, told IPS that while staffers should return to work in-person, but that will depend on various factors—including what mitigation measures the UN has taken, and will take, if the situation gets worse.

If the outbreak makes the UN a hazardous work environment, he asked, will staff be able to stay home?

In any case, he pointed out, the Organization should have a policy to allow exemptions and accommodations for staff (including for medical reasons and domestic situations where children are still home from school)

In Geneva, which is the second largest UN city, things are virtually back to normal. The UN meetings were mostly online and also in a hybrid mode – both in-person and online.

Prisca Chaoui, president of the 3,500-strong Staff Union at the UN Office in Geneva (UNOG), told IPS there is a gradual return to the office, and currently about 50% of staff are back in their offices. This is also due to Swiss protective measures like physical distancing still being in place.

As for guidelines on wearing masks, UNOG is abiding by the recommendations of the Swiss authorities, and is in close contact with the World Health Organization (WHO) and following their advice. Staff have no concerns whatsoever as all the protection measures have been put in place and being implemented in full, she added.

While staff have never stopped working and delivering on the mandate of the Organization, many staff look forward to getting back to the office, Chaoui declared.

As the situation on New York improved, the President implemented an increase in the number of delegates in the General Assembly Hall from 1 to 1+1 and for the High-Level Week to 1+3.

To ensure that all Member States have an equal opportunity to participate in high-level week, the option for Member States to send a pre-recorded video statement was included, if delegations are unable to travel due to on-going COVID-related concerns.

This option, he said, was not intended to replace in-person attendance but rather provide delegations with an alternative means to attend that is mindful of the disparity in the implications of the pandemic on delegations, including due to the matter of vaccine equity.