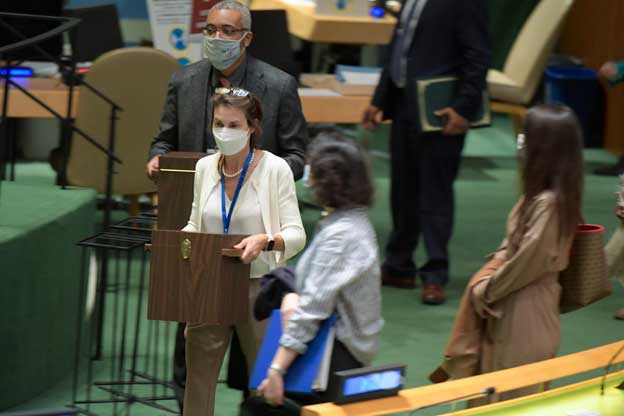 UNITED NATIONS, Sep 16 2021 (IPS) - When hundreds of delegates and diplomats arrive in New York city next week for the new 76th session of the UN General Assembly, they will be pinned down with pandemic restrictions in a city where Delta variant infections have been skyrocketing.

Under strict mandatory restrictions that came into force September 13, no one, not even diplomats, will be able to enter restaurants, bars, Broadway shows, or participate in any other indoor activities in New York city — if they are not vaccinated and cannot produce their vaccination cards.

But the United Nations will be an exception: while the nearly 3,000 staffers in New York will have to produce their vaccination cards to enter the UN cafeteria and wear masks inside the building, diplomats and visiting delegates will have free access both to the café, delegate’s lounge and the delegate’s dining room.

Asked whether vaccination certificates will be mandatory for visiting delegates, UN spokesperson Stephane Dujarric, said: “As you know, the Secretary General’s authority over delegates is one that is limited, at best.”

Under longstanding diplomatic protocol, the Secretary-General is subservient to the UN’s 193 member states who reign supreme inside the Secretariat building.

“We believe that this is the right way to do, as it would be useless to ask staff to wear masks if other visitors, including delegates, are being allowed to take them off,” she noted.

As for dining places, she said, it was only last week the Geneva authorities decided to impose a green pass which has been in force since Monday 13.

“Our management hasn’t taken a decision yet on this issue. We expect that they will be aligned to the host country rules, which has been the case since the beginning of the pandemic. This avoids any unnecessary misunderstanding and tension between staff and management,” she added. 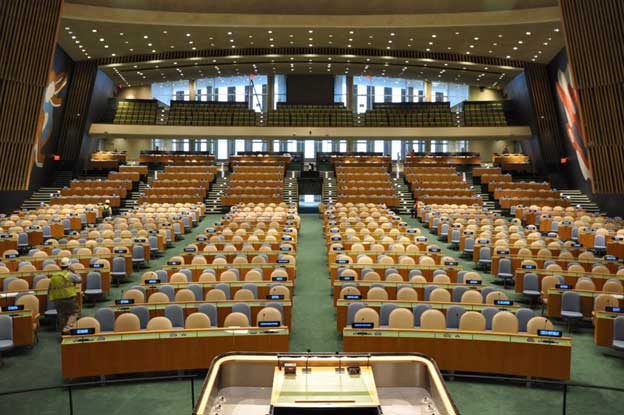 A limited number of world leaders and delegates will be at the high-level meeting of the General Assembly, come September 21. Credit: United Nations

Dujarric told reporters on September 13: “We’re taking efforts to reduce the on site footprint from the Secretariat staff. Member States have agreed to limit their number of delegates that will enter the General Assembly Hall. All persons will be required to attest as a condition of entry that they have not had symptoms or been diagnosed with COVID or close contact with anyone”.

He said it was also important that visiting delegates will be subjected to the Host Country’s travelling and entry requirements, and everyone… “I mean, all delegates that are coming in have also been reminded that basically, to do anything in New York City, you need to be vaccinated, whether it’s to take public transportation, though I don’t want to prejudge anything; not sure they would take public transportation, but to enter restaurants, stores, any sort of activity … you need to show a vaccination”.

“In addition, as we’ve said, the staff that needs to be in the building during the General Assembly high level week, is mandated to be vaccinated. So, that’s where we are”.

And to sit in at the 4th Floor restaurant in the UN building you have to show proof of vaccination. “Yes, like in any other restaurant in New York City,” he noted.

As a gesture of goodwill, however, New York city Mayor Bill di Blasio said on September 15 the city will be opening “a pop-up testing and vaccination site at UN headquarters next week and provide free COVID-19 tests, as well as the single-dose Johnson and Johnson vaccines”.

“As we prepare for High-Level week, New York City stands ready to support our partners at the United Nations with testing and vaccine resources,” he said.

“We are proud to join in the ongoing efforts to keep all UNGA attendees and our fellow New Yorkers safe during the pandemic,” he added.

In a joint statement with International Affairs Commissioner Penny Abeywardena, he thanked the General Assembly President Abdulla Shahid of the Maldives for taking the critical step of requiring proof of vaccination for those entering the Assembly hall during next week’s High-Level meeting.

Ian Richards, the former President of the Coordinating Committee of International Staff Unions and Associations (CCISUA), told IPS Switzerland leaves it to employers to decide their mask policy, and in the Palais des Nations in Geneva, masks are required in common spaces but not at the desk.

Regarding restaurants, he said, the Covid pass is not currently required in workplace cafeterias, although it is in normal restaurants.

“Of course, whatever rules are decided whether in Geneva or New York, they should be same for staff and delegates. Both can transmit Covid in the same way,” declared Richards.

Guy Candusso, a former First Vice President of the UN Staff Union in New York, told IPS the Secretary-General is responsible for the health and safety of all individuals, including diplomats, within the UN complex.

“Unless he is expressly overridden by the General Assembly, I believe he can institute protective measures if the situation requires it,” he said.

Meanwhile, in a letter to UN staffers last month, Secretary-General Antonio Guterres said all staff at UNHQ, in consideration of the need to protect one another, will be required to report their vaccination status including through EarthMed with immediate effect.

In addition, any personnel who has been on site and has a positive COVID-19 or Antigen test result must report the results immediately to the Division of Healthcare Management and Occupational Safety and Health through the confidential self-reporting portal (medical.un.org) in order to ensure effective risk mitigation at the workplace.

“I continue to be very grateful to those staff who have been working on premises throughout the pandemic, either because their functions could not be performed remotely or when remote work would have impacted their effectiveness and efficiency,” Guterres said.

“I particularly commend those who did so when we did not have the protection of vaccination. As the presence of unvaccinated staff potentially increases the risk for other staff members, whether vaccinated or not, vaccinations will be mandated for staff performing certain tasks and/or certain occupational groups at UNHQ whose functions do not allow sufficient management of exposure.”

This mandate may be waived where a recognized medical condition prevents vaccination.

Those staff members who will be required to be vaccinated must receive the final dose of a vaccine no later than 19 September 2021.

Any COVID-19 vaccine that is recognized by the WHO, or under routine approved-use by a Member State’s national health authority, is accepted. Affected staff will be notified by their respective offices during the week of 16 August.

“As personnel serving in New York, we are privileged to have access to effective vaccines through local vaccination programmes. In addition to requiring certain staff to be vaccinated, I strongly encourage all personnel who have not already done so to take advantage of this opportunity to be vaccinated to promote your safety and health and all those around you.”

“The situation continues to be monitored and the possibility of additional measures announced will remain under consideration and will be reviewed and adapted as needed,” said Guterres.