This article is part of IPS coverage of the International Day for the Elimination of Violence against Women on Nov. 25, which kicks off 16 days of activism on the issue around the world. 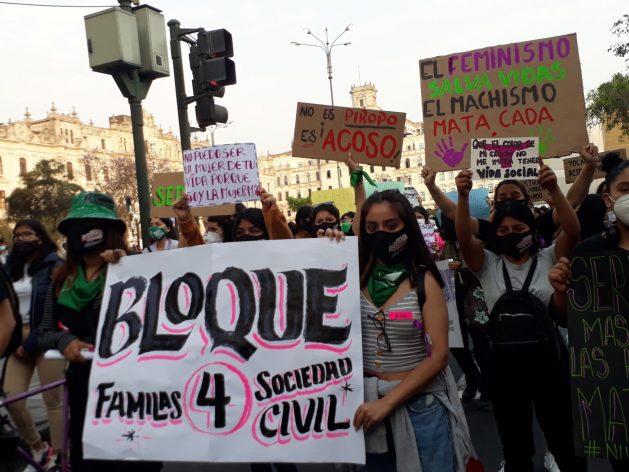 Despite restrictions due to covid, women from various feminist, youth and civil society groups gathered in the central Plaza San Martin in Lima and marched several blocks demanding justice and protesting impunity for violence against women, on Nov. 25, 2020. CREDIT: Mariela Jara/IPS

LIMA, Nov 24 2021 (IPS) - Despite significant legal advances in Latin American countries to address gender-based violence, it continues to be a serious challenge, especially in a context of social crisis aggravated by the covid-19 pandemic, which hits women especially hard.

“Existing laws and regulations have not stopped the violence, including femicide (gender-based murders). There is a kind of paralysis at the Latin American level, on the part of the State and society, where we don’t want to take much notice of what is happening, and women are blamed,” said María Pessina Itriago, a professor and researcher and the director of the Gender Observatory at UTE University in Quito.

Pessina, a Venezuelan who lives in the Ecuadorian capital and spoke to IPS by telephone from the university, said violence against women is ageold, and “we are still considered second-class citizens who are not recognized as social subjects.” And this dates way back – to the slaughter of “witches” in Europe in the Middle Ages, for example, she added.

"It hasn’t been easy to achieve my independence, have my own income and raise my children. I have suffered humiliation and slander, but I knew who I was and what I wanted: to live in peace and have a home without violence." -- Teresa Farfán

“The genocide of women is something that has not stopped and now in the context of the pandemic has become more serious. I believe that, in reality, the pandemic that we have experienced for many years is precisely this, that of gender violence,” she remarked.

Her reflection came ahead of the International Day for the Elimination of Violence against Women, which is celebrated on Thursday, Nov. 25 and kicks off 16 days of activism up until Dec. 10, World Human Rights Day.

The World Health Organization (WHO) and U.N. Women warned in March that globally one in three women suffers gender-based violence. And that the problem, far from diminishing, had grown during the covid pandemic and the restrictions and lockdowns put in place to curb it.

The study “Global and regional estimates of violence against women: prevalence and health effects of intimate partner violence and non-partner sexual violence”, which analyzed data from 2000 to 2018, is the most far-reaching produced by WHO on the topic.

The report, published in March of this year, stresses that violence against women is “pervasive and devastating” and affects one in three women with varying degrees of severity.

For Latin America and the Caribbean, the study puts the prevalence rate of violence among women aged 15 to 49 at 25 percent. 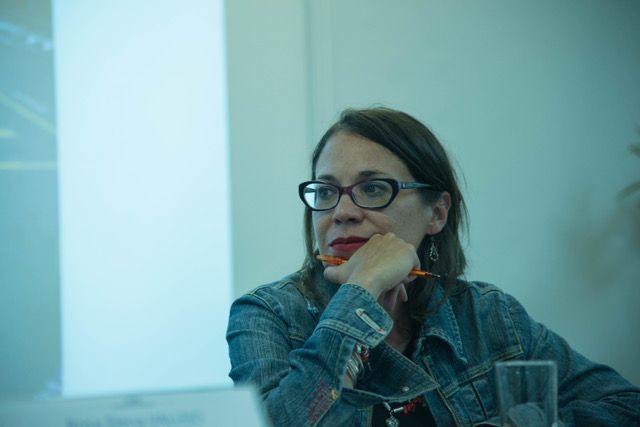 María Pessina Itriago is a professor, researcher and director of the Gender Observatory at UTE University in Quito. CREDIT: Courtesy of María Pessina

A regional epidemic during the global pandemic

With respect to femicides, the Gender Equality Observatory of the Economic Commission for Latin America and the Caribbean (ECLAC) reports that 4640 women died from this cause in 2019. The organization also called attention to the intensification of violence against girls and women during the pandemic.

The panorama is compounded by the gendered impacts of the pandemic on employment, which reduces women’s economic autonomy and makes them more vulnerable to violence.

According to the International Labor Organization (ILO), the region of the Americas experienced the largest reduction in female employment during covid, a situation that will not be reversed in 2021.

Peruvian sociologist Cecilia Olea, of the non-governmental Articulación Feminista Marcosur (AFM), which is made up of 17 organizations from 11 countries – nine South American nations, Mexico and the Dominican Republic – said there have been significant advances in the last 30 years in the fight against gender violence.

Among them, she cited the fact that States recognize their responsibility for the problem and no longer consider it a private matter.

She also pointed out that Latin America is the only region in the world with a specific human rights treaty on the issue: the Inter-American Convention on the Prevention, Punishment and Eradication of Violence against Women, known as the Convention of Belem do Para after the Brazilian city where it was approved in 1994, which established women’s right to live free of violence and set the framework for national laws to address this violation of women’s rights.

However, Olea said in an interview with IPS in Lima that the legal and regulatory framework has not been accompanied by political strategies to change the social imaginary of masculinity and femininity, which would provide incentives to modify the culture of inequality between men and women; on the contrary, she said, the violence forms part of a culture of impunity.

“Males feel free to oppress and governments are failing in their responsibility to guarantee comprehensive sex education throughout the educational system, in primary school and technical and higher education; this program exists by law but implementation is deficient due to lack of training for teachers and the opportunity to train people in new forms of masculinity is lost, for example,” she remarked.

Olea, a feminist activist and one of the founders of the AFM, said that not only do governments have a responsibility to prevent, address and eradicate gender violence, but there is also an urgent need to ensure health services; justice with due diligence, as the current delays revictimize and inhibit the use of regulatory instruments; and budgets to correct the current shortfall that prevents a better response to this social problem. 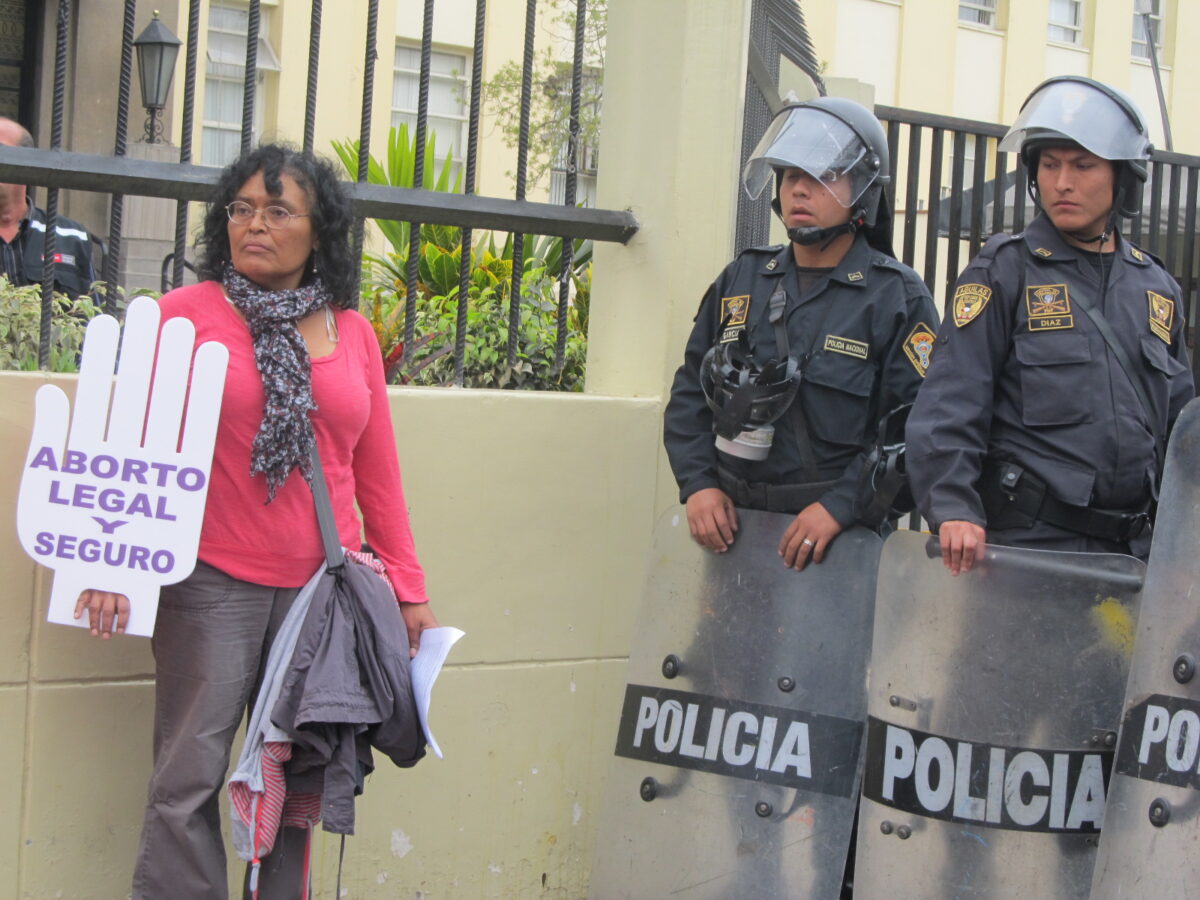 Cultural change in the new generations

Raised in a machista home, Pessina rebelled against gender norms from an early age and her constant questioning led her to come up with a new definition of how a good person should act.

“I believe that good people do not tolerate injustice or inequality of any kind, which is why I became a feminist about 15 years ago and I am very happy to be able to contribute a grain of sand with my students,” she said.

Pessina said the challenges to progress in the eradication of violence against women are to provide public policies with a budget to make them work; and to achieve an alliance between the State, civil society organizations and feminist movements to create a road map that incorporates excluded voices, such as those of indigenous women.

“The places where they can file reports are not near their towns, they have to go to other towns and when they get there they often cannot communicate in their own language because of the colonialist view that everything must be in Spanish, and there are no interpreters,” she complained.

Another part of the problem, she said, is that “the State itself blocks complaints and keeps these people marginalized, and they are not taken into account in the countries’ statistics on violence.”

The third challenge was to work with the media in Latin America because of their role in the construction of imaginaries, in order to generate the figure of the ombudsperson focused on gender to ensure that information is treated in a way that contributes to equality and does not reproduce discriminatory stereotypes.

Pessina said that what is needed is a cultural transformation driven by the new generations, in favor of gender equality.

“We see more young feminist women activists mobilizing to make it happen and they will make a turnaround; not now, but maybe in a decade we will be talking about other things. These new generations not only of women but of men, I think they are our hope for change,” she said.

Quechua Indian woman Teresa Farfán, in the foreground, stands with two other rural women with whom she shares work and experiences in her Andes highlands community in Peru. She is convinced that telling her personal story of gender-based violence can help other women in this situation to see that it is possible to escape from abuse. CREDIT: Courtesy of Teresa Farfán

“I wanted a home without violence”

Teresa Farfán reflects the lives of many Latin American women who are victims of machista violence, but with a difference: she left behind the circle of gender violence that so often takes place in the home itself.

She is 35 years old and describes herself as a peasant farmer, a single mother and a survivor of an attempted femicide. She was born and lives in the town of Lucre, an hour and a half drive from the city of Cuzco, the capital of ancient Peru, in the center of the country.

Like most of the local population, she is dedicated to family farming.

Nine years ago she separated from the father of her children who, she says, did not let her move forward.

“He wanted me just to take care of the cows, but I wanted to learn, to get training, and that made him angry. He even beat me and it was horrible, and at the police station they ignored my complaint. He kicked me out of the house and thought that out of fear I would come back, but I took my children and left,” she told IPS during a day of sharing with women in her community.

At her moment of need she didn’t receive the support of her family, who urged her to return, “because a woman must do what her husband says.”

But she did have supportive friends who gave her a hand, both inside and outside her community, as part of a sisterhood of Quechua indigenous peasant women like her in the Peruvian highlands.

“It hasn’t been easy to achieve my independence, have my own income and raise my children. I have suffered humiliation and slander, but I knew who I was and what I wanted: to live in peace and have a home without violence,” she said. A wish that remains elusive for millions of Latin American women.