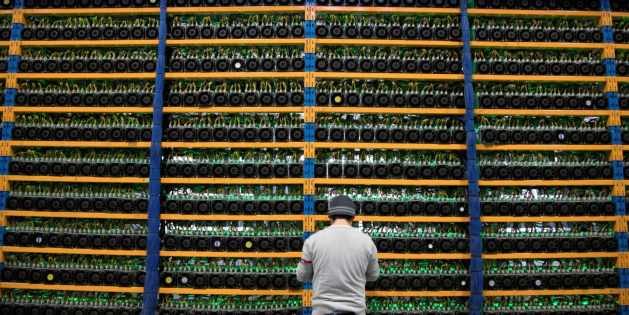 A worker checks the fans at the cryptocurrency farming operation, Bitfarms, in Quebec, Canada (image: Alamy)

A significant driver behind this sudden drop was the news that China had begun a sweeping crackdown on the cryptocurrency industry, driven by concerns about financial risk and excessive energy consumption. Bitcoin “mining” – the process by which transactions are verified and new coins are created – is highly energy intensive, leading to criticism of the currency’s oversized carbon footprint.

Before the clampdown, China accounted for two-thirds of Bitcoin mining worldwide. In the months since, mining companies have been quick to move their operations overseas. Recent data suggests that energy consumed by Bitcoin has increased in the US, Canada and Kazakhstan, and with it, pressure to address the currency’s soaring electricity appetite.

Bitcoin is a decentralised digital currency, meaning that each time money is sent or received, the transaction is kept on a public record, rather than with a bank. But in the absence of a trusted authority to verify each transaction, the responsibility falls to participants in the Bitcoin network known as “miners”.

Herein lies Bitcoin’s energy problem. The more computing power you can muster, the more often you will be first to solve the puzzle and earn the Bitcoin. And the machines used to mine Bitcoin – application-specific integrated units (ASICs) – consume a lot of energy, to say the least.

To verify transactions, miners connect computers to the cryptocurrency network and use them to solve incredibly complex, randomly generated mathematical puzzles. But not just any computer will do the job: Bitcoin mining requires running multiple specialised computers almost 24/7 in order to achieve the computing power needed to find the solution.

Whoever solves the puzzle first is allowed to add a “block” of transactions to the global ledger, and is rewarded with a small amount of newly minted Bitcoin.

Herein lies Bitcoin’s energy problem. The more computing power you can muster, the more often you will be first to solve the puzzle and earn the Bitcoin. And the machines used to mine Bitcoin – application-specific integrated units (ASICs) – consume a lot of energy, to say the least.

In one year, the entire Bitcoin network consumes around 120 terawatt hours (TWh) of energy, or more than the whole of the Netherlands, according to estimates by Cambridge University’s Bitcoin Electricity Consumption Index (CBECI). If Bitcoin were a country, it would rank 32nd in the world by annual electricity consumption.

“That’s the price we pay to secure transactions,” says Anton Dek, cryptoasset and blockchain lead at the Cambridge Centre for Alternative Finance, and one of the creators of the index. Bitcoin’s energy usage isn’t an accidental by-product, he explains. Mining Bitcoin is purposefully designed to be costly – both in terms of electricity and money – to prevent would-be hackers from taking over the network.

So far, it seems to have worked. “We haven’t seen any double spending or any attacks on the network, partially because this attack would be too expensive. So it kind of makes sense, though that doesn’t mean it shouldn’t be of concern,” says Dek.

Bitcoin’s energy footprint has skyrocketed in recent years. In 2017, economics blog Digiconomist estimated that the network of specialised mining computers used 29 TWh annually, equal to 0.13% of total global electricity consumption. This had grown to around 0.65% by May this year, according to CBECI data.ƒcbeci

Unchecked, Bitcoin mining operations in China alone were set to generate 130.5 million metric tons of CO2 by 2024, around the same as the total annual emissions of the Czech Republic, according to a 2021 study in the journal Nature.

Since President Xi Jinping pledged last year that China would aim to be carbon neutral by 2060, the government’s stance on Bitcoin and cryptocurrency mining has hardened.

The first sign came in March this year, when Inner Mongolia announced it would phase out cryptocurrency mining entirely after the province failed to meet its 2020 target for reducing energy consumption.

Then in May, China’s Vice Premier Liu He declared at a State Council meeting that the government intended to “crackdown on Bitcoin mining and trading”.

Regional governments were quick to act, revoking licences of companies involved in cryptocurrency mining, cutting off power to mining facilities and in some cases giving firms just seven days to shut down their operations. By the end of June, one industry expert estimated that 90% of China’s Bitcoin mining centres – more than half of the global total at the time – had gone offline. In the same month, Bitcoin’s total electricity footprint was cut in half, according to CBECI data.

“The crackdown in China has resulted in a mass exodus of miners,” explains Peter Wall, CEO of North American cryptocurrency mining firm Argo Blockchain. “Displaced Chinese miners are searching the globe for appropriate hosting sites for their machines.”

Countries with access to cheap electricity like Canada, Russia, Kazakhstan and, especially, the United States are now seeing a surge in interest from Chinese miners looking to partner with local firms. Latin American nations with similarly affordable electricity rates and a weak institutional framework for the industry are also emerging as destinations for the industry.

Venezuela and Paraguay are among those looking to attract miners unable to operate in China and Argentina could become a global bitcoin mining destination, with Canada-based Bitfarms announcing it had begun construction of a 210 MW Bitcoin mining facility in Argentina, the largest in the country. The mine will source its power directly from the Maranzana gas power station.

In September, El Salvador’s president Nayib Bukele made headlines when he adopted the currency as legal tender, despite experts voicing concerns that the attendant increase in demand for electricity would make the country more dependent on energy imports than it already is.

So how will this “great mining migration”, as it is described in cryptocurrency circles, shape Bitcoin’s carbon footprint?

“We hope that the long-term impact of this migration is the re-installation of machines in jurisdictions in which mining operations can be powered by renewable energy,” says Wall.

The short-term reality may not be so rosy. In July, Beijing-based crypto-mining giant Bitmain agreed to move a batch of its mining machines to a 180 megawatt (MW) facility in Kazakhstan whose electricity is supplied by a local coal power plant. Given that just 1% of Kazakhstan’s energy mix is renewables, this may not be a one-off. In Canada, oil and gas company Black Rock Petroleum has agreed to host up to 1 million Bitcoin-mining machines relocated from China, with the first 200,000 units sourcing power directly from a natural gas well.

The new global hub of Bitcoin mining, however, is expected to be the US state of Texas. The state’s governor, Greg Abbott, is actively courting the cryptocurrency industry, tweeting in June that “Texas is open for crypto business.” Shenzhen-based BIT Mining plans to invest $26 million in a 57 MW facility in the state.

Texas offers “huge possibilities for mining to utilise renewable sources” says Wall. He points out that in the west of the state, wind turbines power 90% of the grid. Overall, however, the Texas energy grid is made up of just over one-fifth renewable energy, and has proven fragile in extreme weather conditions.

CBECI data now shows Bitcoin’s electricity consumption is climbing once again. As the network becomes more distributed across the globe, what options remain for tackling the currency’s carbon footprint?

One solution may be to rethink how Bitcoin transactions are verified. The current method is called “Proof of Work” because participants must do the work of mining to verify transactions.

The most commonly proposed alternative is “Proof of Stake”. This removes computing power from the equation. Instead of competing against each other, participants who have first made a deposit in Bitcoin are selected at random to verify transactions. The larger the deposit, the greater the chance of being selected and earning the reward.

Several smaller cryptocurrencies already use this method. Ethereum, one of Bitcoin’s main competitors, is expected to make the switch later this year, but some in the industry remain sceptical.

“We have no plans to shift away from Proof of Work,” says Wall. Miners will inevitably migrate to the cheapest electricity available on the grid and increasingly that is not coal, oil or gas plants, he argues. “We are at a point where renewable power is the same price or lower than power generated by fossil fuels.”

“It may be too late for existing digital currencies like Bitcoin to change their methods of confirming transactions,” agrees Truby, of Qatar University. The best option is to “focus on mitigating mining devices’ energy consumption by improving the devices and providing them with renewable energy,” he says.

Norway and Iceland, with their plentiful supply of geothermal, hydroelectric and wind power, have been using renewable energy to power cryptocurrency mining for years. El Salvador also claimed that its Bitcoin mining operations would be powered by “100% clean, 100% renewable, 0 emissions energy” from a volcano.

Against a backdrop of growing pressure on energy-intensive industries of all kinds to address their contribution to global carbon emissions, Wall is frank about the need for cryptocurrency to adapt: “Proving that crypto can be sustainable is pivotal to its success. The future of energy is green and renewable, so the future of crypto must reflect that.”